With less than two weeks before school begins Aug. 31, the district’s 1,830 teachers do not have a new contract. Evergreen Education Association representatives and district officials have been meeting since March to hammer out a new contract. But time is running out.

Thursday was the first time a state-appointed mediator joined the bargaining sessions. Four more mediated bargaining sessions are planned for next week. At the union’s general membership meeting Aug. 30, members will either vote to ratify a new contract or vote to strike.

“There hasn’t been any significant movement,” said Rob Lutz, union president. “The district continues to nibble around the edges. They have a desire to hoard money so they can put a computer in front of every student. They are prioritizing computers over professionals. It’s really disappointing.”

Chris Kinder, a math teacher at Pacific Middle School, spoke about how the shortage of substitute teachers affects students as well as other teachers.

“Sometimes, when teachers are out sick, the principal steps in to cover a class,” she said.

Robert Cozzi, 28, is beginning his second year of teaching math at Wy’east Middle School. Previously, he was a manager at Starbucks and trained employees. He realized he enjoyed teaching. He recalled being inspired by his history teacher at Mountain View High School and decided to go back to school to become a teacher. But money is tight. Cozzi worked a summer job “so my wife and I could survive,” he said.

“That’s a big change in how we teach kids,” he said.

Kenck is part of the union’s bargaining team, which has been negotiating with the district since March.

“The issues are out there. It’s 1½ weeks until school. We should have this done by now,” he said.

The following bargaining points are listed on the union’s Facebook page:

n Counseling and other special services need to be better staffed so students are ready to learn. Current staffing does not allow counselors to support students one-on-one.

n Provide basic materials, curriculum and instructional time for the benefit of students and teachers. 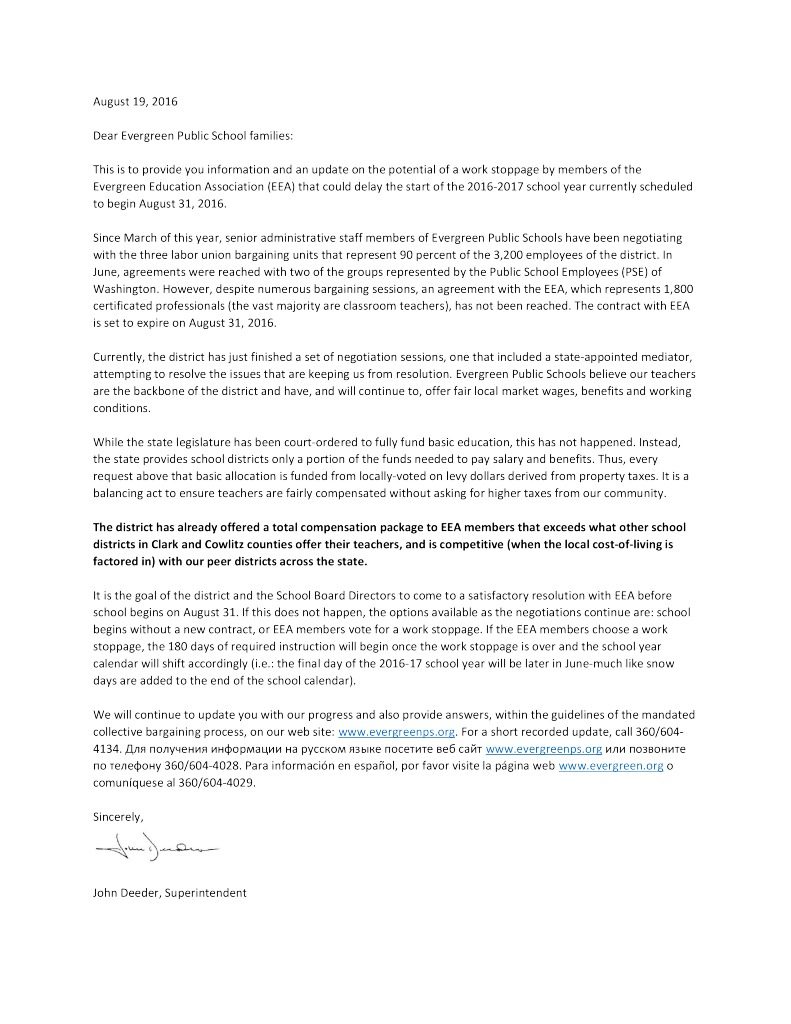 With more than 26,000 students, Evergreen is the largest school district in Southwest Washington. The union represents more than 1,830 teachers.

Rising health insurance premiums are part of the salary package being discussed, Lutz said. The state provides $780 a month for health insurance for each full-time employee, but the Evergreen district doesn’t kick in any extra money for teachers’ health care premiums. Some districts do.

But he’s worried about his fellow teacher, C.J. Butenschoen. He and his wife, also a teacher, have a new baby, and she is staying home this year. He’s taken on coaching football and teaching drama after school in order to make extra money. He thinks those extra jobs will pay for about half of his additional health care costs for his wife and infant. At the minimum, he will have to pay an additional $600 per month for health insurance premiums.

Evergreen Public Schools sent a letter from Superintendent John Deeder to parents Friday afternoon. It referred to teachers as “the backbone of the district.” It says the district pays, and will continue to pay, fair local market wages and benefits and offer good working conditions.

A chunk of the problem lies with the state, the letter notes. While the Legislature has been court-ordered to fully fund basic education, this has not happened. Instead, the state provides school districts only a portion of the funds needed to pay salary and benefits. Thus, every request above that basic allocation is funded from levy dollars derived from property taxes and voted on locally.  It is a balancing act to ensure teachers are fairly compensated without asking for higher taxes from our community, according to the letter.

• What’s next: Mediated bargaining sessions are planned for Aug. 22, 23, 25 and 26. At the Aug. 30 union membership meeting, teachers will either ratify a new contract or vote to strike. The first day of school is Aug. 31. The current contract expires Aug. 31.

“The district has already offered a total compensation package to EEA members that exceeds what other school districts in Clark and Cowlitz counties offer their teachers, and is competitive (when the local cost-of-living is factored in) with our peer districts across the state,” Deeder wrote.

Deeder’s letter said the district and school board’s goal is to “come to a satisfactory resolution” with the union before school begins Aug. 31. But if that doesn’t happen, Deeder said, the options are for school to begin without a contract or the teachers would “vote for a work stoppage.”

State law addresses strikes by public employees, but not teachers specifically. Attorney General Rob McKenna wrote a formal opinion on the law in 2006: “In Washington, state and local public employees do not have a legally protected right to strike. No such right existed in common law, and none has been granted by statute. State statutes presently do not impose penalties on public employees for engaging in a strike. Under appropriate circumstances, a court may enjoin a public employee strike and may impose penalties for noncompliance.”

That’s what eventually happened after teachers in Kelso went on strike Sept. 16. A Cowlitz County judge ruled the strike illegal and ordered the teachers back to work. As the strike continued into its second week, the judge imposed a $2,000 per day fine on the union if teachers didn’t return to work. At that point, the union and the district reached an agreement on Sept. 27.