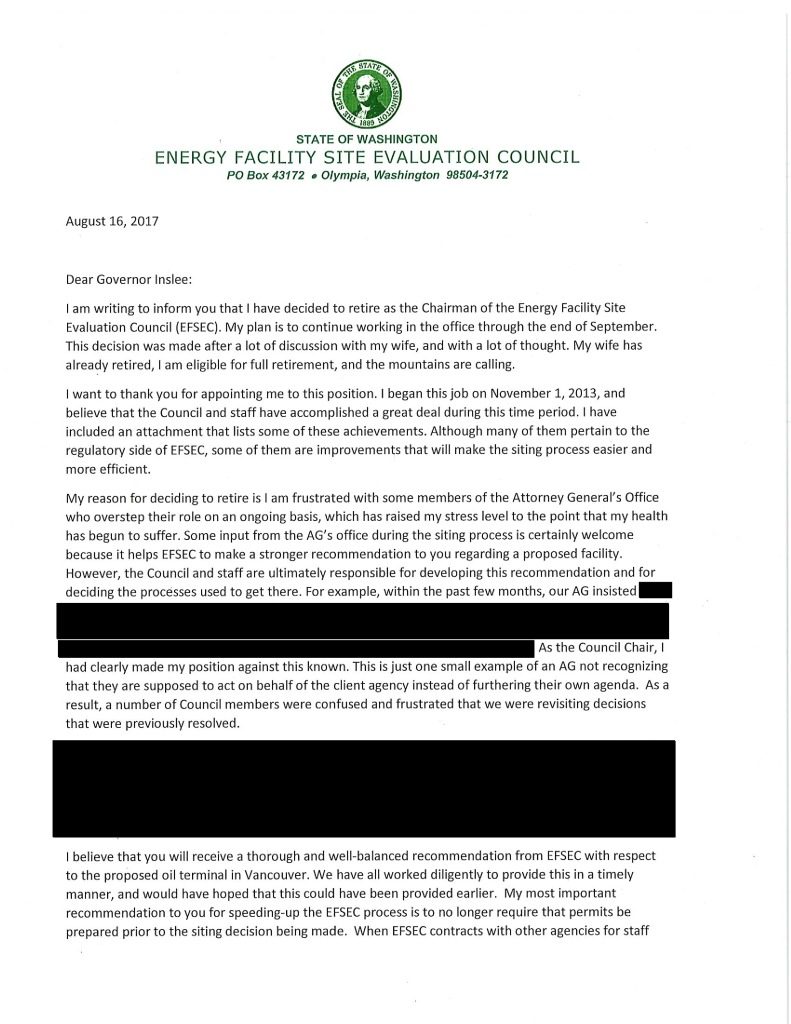 At a time when the Washington state Energy Facility Site Evaluation Council is set to release a decision on the controversial oil terminal planned for Vancouver, the agency will soon be without a leader.

Last week, EFSEC Chairman Bill Lynch announced he would be stepping down from his position at the end of September.

Tensions between the council and the Washington Attorney General’s Office could be to blame, according to Lynch’s resignation letter submitted to Gov. Jay Inslee.

OPB obtained the Aug. 16 letter, which points to frustrations with some people in the Attorney General’s Office who “overstep their role on an ongoing basis,” Lynch wrote.

He went on to say the friction has caused his stress levels to rise to a point where he is concerned for his health.

Washington Attorney General Bob Ferguson has publicly voiced his opposition to the project in the past.

“The bottom line is that the potential benefits of this project are dramatically outweighed by the potential risks and costs of a spill,” he said in a July 2016 statement.

In his resignation letter, Lynch accuses the Attorney General’s Office of furthering its own agenda instead of acting on behalf of EFSEC, the client agency.

“As a result, a number of council members were confused and frustrated,” Lynch wrote.

In his resignation letter, Lynch criticized the siting process, saying it would make more sense to submit a recommendation to the governor before issuing draft permits.

“I am unaware of any other siting process that requires permits to be developed before the siting decision is made,” Lynch wrote.

“If you or a future governor ultimately decides not to approve a proposed project, all the time and money spent in the development of the accompanying permits is wasted,” he added in his letter.

Inslee appointed Lynch to the position of EFSEC chair in 2013 when the council first took up the issue of a proposed oil terminal at the Port of Vancouver. Since then, the project has had several public hearings, a number of draft permits issued, and a monthlong quasi-judicial adjudication hearing that took place last summer.

Normally, the evaluation process is required to be completed within one year. But the recommendation deadline has been pushed back several times, most recently last week when the council voted to extend the deadline a seventh time.

The project, the longest under review by EFSEC, has been under consideration for more than four years.

When asked for comment on his resignation, Lynch declined. He said his only priority right now is to get a recommendation to Inslee while he’s still on the council.