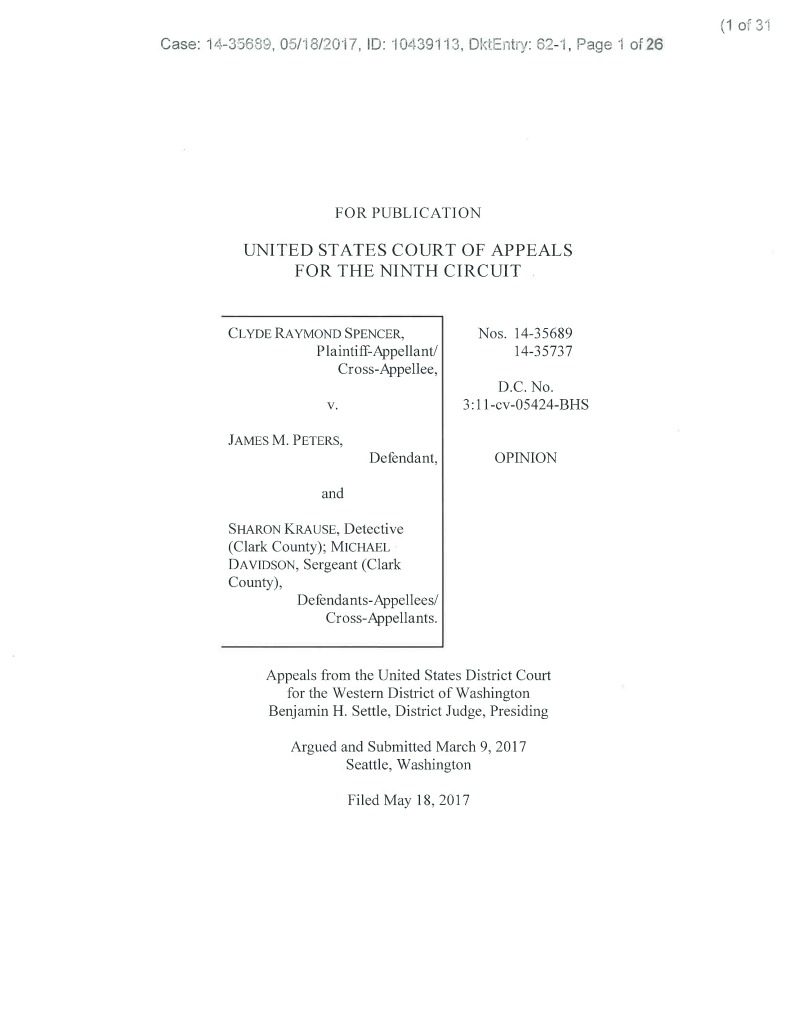 A U.S. Court of Appeals panel has reinstated the $9 million jury award to Clyde Ray Spencer, the former Vancouver police officer who spent nearly two decades in prison for a crime he didn’t commit.

Spencer’s high-profile attorney, Kathleen Zellner of Chicago, appealed the decision to the U.S. Court of Appeals for the 9th Circuit. And Thursday, that ruling came out in favor of Spencer, reinstating the $9 million jury verdict.

Spencer was wrongfully convicted in 1985 of sexually abusing his two children and a stepson. He was sentenced to two life terms plus 14 years. In 2004, his sentence was commuted by outgoing Gov. Gary Locke, who in a commutation order cited numerous troubling aspects of Spencer’s case.

The convictions were subsequently thrown out and the charges were dismissed.

The jury also found that Clark County sheriff’s Sgt. Mike Davidson, Krause’s supervisor, had an affair with Spencer’s wife and was liable in his supervisory capacity. At the time of his arrest, Spencer was a motorcycle officer with the Vancouver Police Department.

Clark County was dismissed as a defendant in the civil case because Spencer couldn’t prove municipal liability. But the county paid for the legal counsel of former employees Krause and Davidson, who were retired at the time of the trial.

In February 2014, the Clark County Commissioners unanimously voted to not pay the $9 million jury award. Then-Commissioners Tom Mielke, David Madore and Steve Stuart voted not to indemnify Krause and Davidson, meaning they would no longer protect them by paying the settlement. County prosecutors argued that since Krause was found to have fabricated evidence, she was outside the scope of her duties as a county employee.

Judge Settle vacated the jury award a few months later, and Spencer vowed to appeal, saying he was “extremely puzzled by the judge’s decision to ignore the jury verdict.”

The judge ruled in favor of Krause and Davidson on the grounds that Spencer did not introduce evidence showing Krause knew or should have known Spencer was innocent.

The appeals court, however, ruled that because Spencer provided direct evidence of fabrication by Krause, he didn’t have to prove that Krause knew or should have known he was innocent.

Attorney Jeffrey Freimund of Freimund Jackson & Tardif in Olympia said he was still digesting the decision and did not want to comment. He sent his client, Davidson — who now lives out of state — an email with a copy of the decision but said he had not heard from him as of late Thursday afternoon.