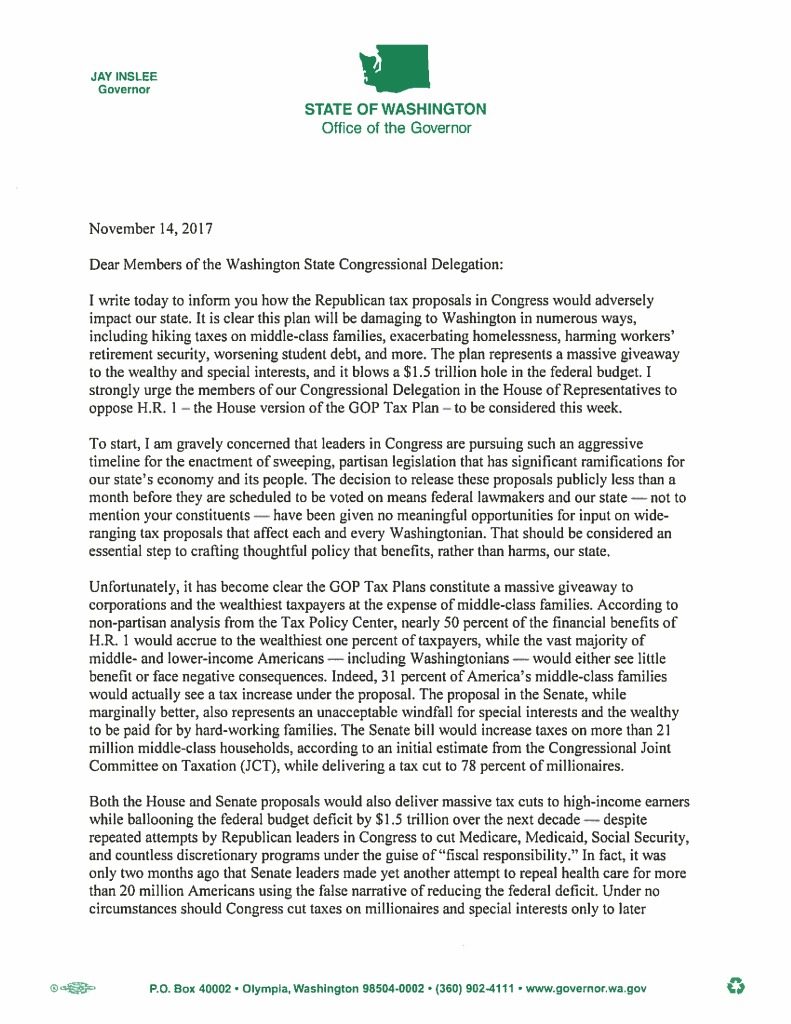 Gov. Jay Inslee is asking the Washington congressional delegation to reject Republican-proposed tax plans in the House and one in the Senate.

“The plan represents a massive giveaway to the wealthy and special interests, and it blows a $1.5 trillion hole in the federal budget,” Inslee wrote in a letter Tuesday to the state’s members of Congress.

Essentially, the plans cut taxes for the middle- and upper-class brackets, with the largest benefit seen for those making between $100,000 and $200,000 and more than $1 million annually, according to an analysis by the Joint Committee on Taxation.

He said approximately 1 million Washington residents use the state and local tax deduction to lower their federal tax bill.

“Eliminating this middle-class benefit would increase families’ federal taxes by hundreds of dollars annually, on average,” Inslee wrote. “It would also place significant pressure on our state and local governments to slash important services like education, health care and public safety, which are supported by sales tax revenues.”

The plans also propose condensing the tax code from seven personal income tax brackets to four. They would also double the standard deduction used by those who do not file an itemized deduction.

As of Tuesday, the Senate version of the GOP plan also would repeal the Affordable Care Act individual mandate. The repeal is marketed as middle-income tax relief and would save $338 million in revenue by eliminating federal subsidies.

Rep. Jaime Herrera-Beutler, R-Battle Ground, is encouraged by the plans, according to her spokesperson Angeline Riesterer, and intends to continue reviewing the package “to ensure the sum of all parts will ease the burden on hardworking residents in Southwest Washington.”

She’s critical, however, of Inslee’s statements against the plans.

“Given that Governor Inslee was out attacking the tax cut plan before it was even released, it’s unclear that he’s actually read it,” Riesterer said. “If he did, then he’s intentionally leaving out the thousands of dollars hardworking Southwest Washington families stand to keep or see added to their paychecks if these tax cuts are signed into law.”

Sen. Maria Cantwell, D-Wash., has sided with Inslee. She addressed the proposals Tuesday in front of the Senate Finance Committee Tuesday.

“Gouging middle class families to pay for the corporation (tax) breaks that you want to give is just wrong,” Cantwell said.

She brought up an analysis by the Joint Committee on Taxation that found 13.8 million Americans would actually see a tax increase if the Senate tax package is approved. More than 300,000 of those increased tax bills would occur in Washington.

“This proposal is nothing more than a massive giveaway to the wealthy at the expense of working families, and any representative from Washington state who supports this plan will have to explain to their constituents why they are putting party and ideology above our home state and our working families,” Murray said.

“I am deeply troubled by what the final GOP Tax Plan will mean for workers, families and communities across Washington State,” he wrote. “This partisan plan does not reflect our state’s values, and it threatens our state’s economy. I urge you to reject this unfair and imbalanced proposal, engage meaningfully with state leaders from both sides of the aisle, and commit to a bipartisan process that follows regular order.”

The U.S. House of Representatives is expected to vote on the bill next week, just two weeks after the plan was made public. A U.S. Senate vote on its version is slated for next week.