We appreciate the support from our subscribers in these difficult times. If you haven’t already, please consider a subscription. Click Here 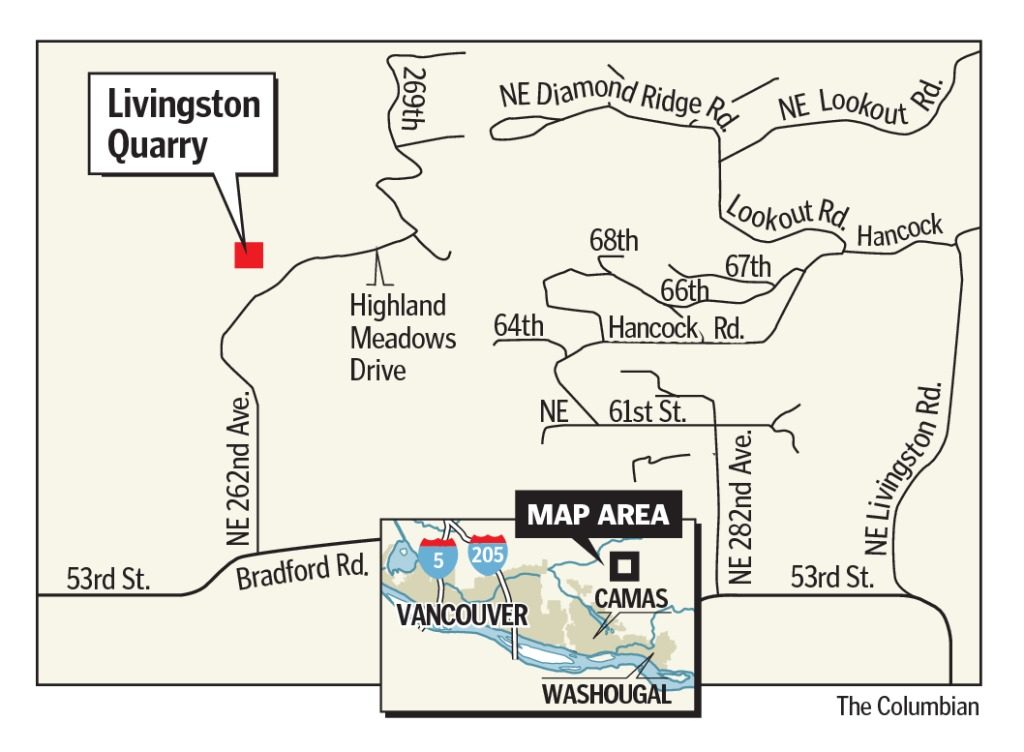 During midmorning on a dirt road miles outside of Vancouver, rush hour never seems to stop.

The sound of dump trucks huffing and snorting echoed through the trees on the hillside as a stream of the vehicles crawled up the road. A nearby sign announced their entry into “Livingston Quarry.” Just as soon as one truck drove into the quarry, another left carrying one or sometimes two loads of gravel.

Mark Martin, who lives nearby, and other neighbors say all that traffic, on otherwise serene road, shouldn’t be happening.

The company overseeing the quarry’s operations is making more trips than allowed by the terms of the conditional use permits that allow the extraction of rock, he said.

He and others in the area have long complained that such truck traffic makes the roads more hazardous.

“Clark County is once again looking the other way with violations,” said Martin.

But the matter has caught the county’s attention and it’s now seeking answers. Earlier this month, the Clark County Council requested that staff with the Prosecuting Attorney’s Office produce a legal opinion on the matter.

“The way the county is growing says it all,” said Council Chair Marc Boldt. He said that when the quarry was first mined decades ago people didn’t live nearby. But as the county has grown people have made homes there.

“So, we’ll have to get through this,” he added.

Operations at the quarry are governed by a set of related and sometimes confusing agreements.

Ballew said that since 1947 Clark County has had agreements with DNR to mine the quarry. She said that the most recent agreement was signed in 2008 and runs until the end of 2027.

“Kind of the way it was envisioned was it would function as one quarry,” said Ballew.

Dividing the quarry are two different mining permits for its two different portions. She said that the permit Tower Rock has for its part of the quarry allows mined rock to be processed for gravel on the adjacent land owned by DNR.

She said that the question that’s come up is the number of trips allowed by the conditional use permits for each property and what they can be used for. Specifically, it’s a question of whether the rock extracted from the Tower Rock side of the quarry can be transported using a trip allowed under the conditional use permit for the DNR side of the quarry.

Questions on the matter were referred to Kevin Tapani, who didn’t respond to a call for comment.

Martin has acquired documents through a public records request that he said suggests that truck trips to the quarry are being improperly combined and creating more traffic through the area.

He pointed to hearing examiner orders regarding the conditional use permits for both properties. In August 2009, a hearing examiner issued an order stating that the quarry’s production for the DNR side should not exceed an average of 70 loaded truck trips per day during normal operations and not to exceed 140 loaded truck trips during peak production.

The hearing examiner order for the other side of the quarry (which allows rock crushing) limits the number of loaded truck trips to 95 loaded truck trips per day (on the condition improvements were made to a nearby intersection).

Martin acquired a calendar through a public records request showing that more loads were completed during the first three months of 2018 than allowed under both permits. He said that the DNR side of the quarry is depleted and that trips allowed for that side of the quarry under its conditional use permit are being used for the other side of the quarry.

He described the situation as problematic.

“Conditional use permits run with the land,” he said. “You can’t pick and choose what parts of it you want to add to the quarry.”

Ballew didn’t have exact numbers on the amount of mineable material remaining on the DNR side of the quarry. However, she confirmed that it contains “very little” material to mine for “most intents and purposes.”

Boldt said that because not much rock is being mined on the DNR side of the quarry, the legal opinion will address whether the number of trips allowed by each conditional permit can be combined and used for either side.

He said he expects the opinion to be produced within a month and will help the county sort the issue out.