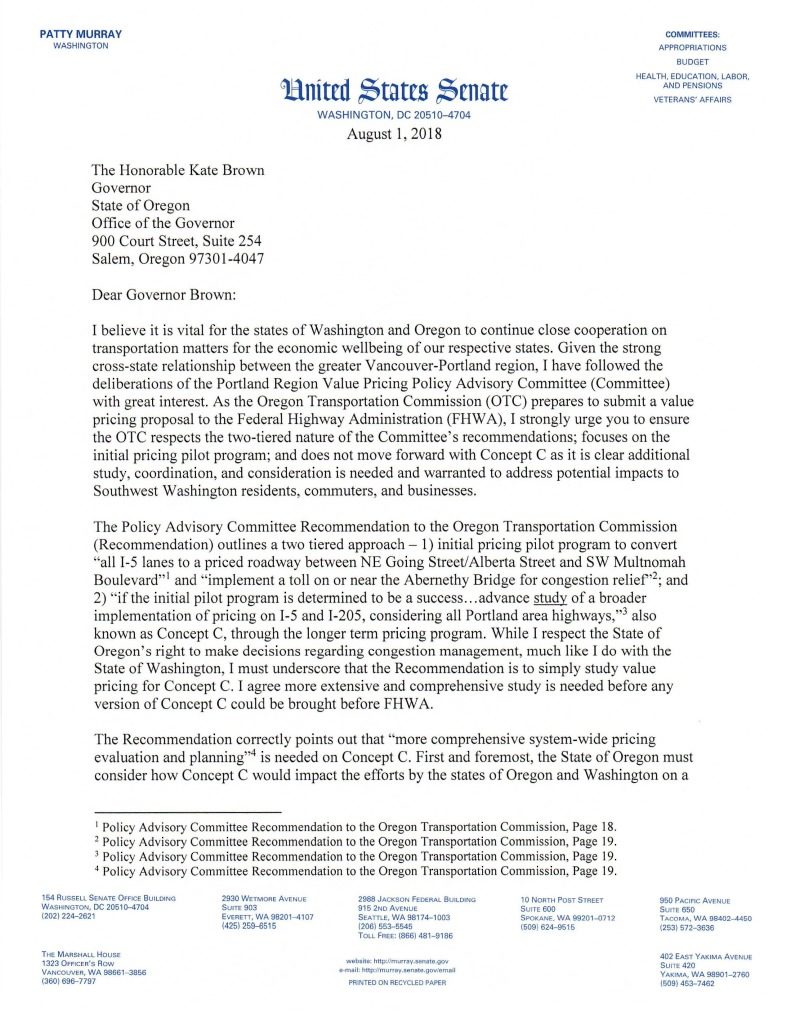 Oregon transportation officials confirmed Thursday that they will abide by a committee’s recommendation and not immediately pursue tolling on Interstates 5 and 205 from the Washington border.

But they will consider imposing tolls on all Portland-area freeways.

The news came in a letter Thursday to Sen. Patty Murray, who had written to Oregon Gov. Kate Brown asking her to ensure that the Oregon Transportation Commission respect a recommendation made by the Portland Region Value Pricing Advisory Committee.

Writing on Brown’s behalf, transportation officials affirmed that the transportation commission will follow through with the committee’s recommendation. It also disclosed that the commission plans to direct the Oregon Department of Transportation to conduct a feasibility analysis of adding congestion pricing to all freeways in the Portland metro area.

Transportation commission Chair Tammy Baney and Oregon Department of Transportation Director Matthew Garrett said the feasibility analysis will look at congestion pricing on Oregon state Highway 217, U.S. Highway 26, Interstate 405 and Interstate 84, in addition to the proposed tolling of I-5 and I-205.

“If the OTC elects to proceed with such a feasibility analysis, ODOT would then develop an approach for the OTC to consider later this year,” Baney and Garrett wrote.

The transportation commission is currently considering a recommendation for tolling just on Interstate 5 and Interstate 205 as directed by HB 2017.

Baney and Garrett said if the preliminary feasibility analysis advances, it will proceed separately from the two initial proposed tolling projects.

The news comes after Washington’s delegation told Oregon one by one to put the brakes on tolling. Prior to Murray’s letter, Rep. Jaime Herrera Beutler, R-Battle Ground, blasted Oregon for considering congestion pricing that would disproportionately impact Southwest Washington commuters. She was joined by the Vancouver City Council, and just last month, Gov. Jay Inslee said Portland’s recommendation to toll to the borders is “going nowhere.”  Sen. Maria Cantwell, D-Wash., is also planning to send a letter to Oregon.

The committee spent six months considering various tolling options on Interstate 5 and Interstate 205, ultimately recommending the transportation commission pursue Concept B. Concept B would toll all lanes on I-5 between Southwest Multnomah Boulevard and North Going Street. The pricing committee also recommended considering Concept E, which would add tolls on I-205 near the Abernathy Bridge and Stafford Road. 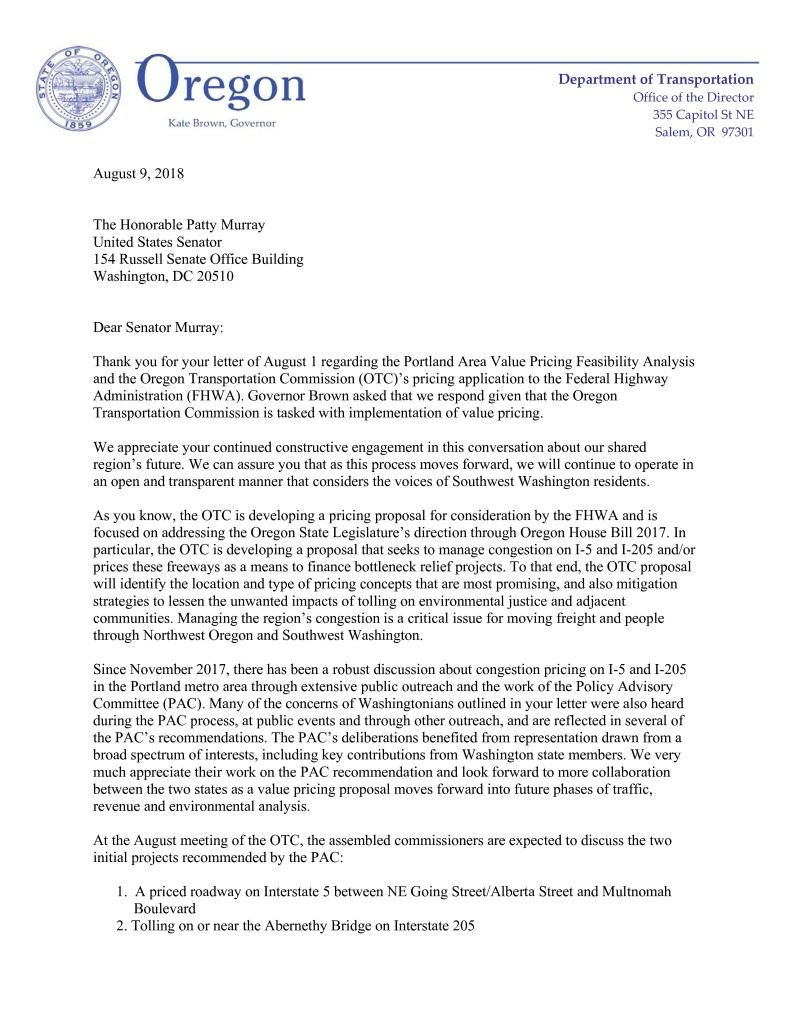 If the first phase of tolling goes smoothly, the committee recommended considering Concept C, which would toll all lanes on I-5 and I-205.

Last month, however, the Portland City Council told the transportation commission that it prefers skipping the phased implementation and moving forward with Concept C.

Murray told Brown the process must be done in an open and transparent manner, to which Baney and Garrett agreed.

“While I respect the State of Oregon’s right to make decisions regarding congestion management, much like I do with the State of Washington, I must underscore that the recommendation is to simply study value pricing for Concept C,” Murray wrote. “I agree more extensive and comprehensive study is needed before any version of Concept C should be brought before (the Federal Highway Administration).”

Murray also brought up the replacement of the Interstate 5 Bridge, stating that a discussion considering value pricing must take the bridge into consideration and “should occur through a larger, regional conversation.”