Southwest Washington officials were dismayed Wednesday to learn that the Portland City Council is pushing for immediate tolls on Interstate 5 and Interstate 205 in lieu of a proposal to phase in tolling on a few sections of the interstate.

The council’s position was outlined in a letter sent to the Oregon Transportation Commission in advance of a special public hearing Thursday as the commission considers a recommendation from the Portland Metro Area Value Pricing Policy Advisory Committee last month.

Clark County Councilor Eileen Quiring, who served on the 25-member advisory board, said she’s not surprised to learn about Portland’s renewed tolling platform, given Portland’s previously expressed views on tolling.

“I’m saddened to see this, but it’s just frustrating watching,” Quiring said, “because we just don’t have a very loud, effective voice.”

Vancouver Mayor Anne McEnerny-Ogle, who also served on the board, said she’s surprised by Portland’s letter in light of the agreement made by the advisory committee to test tolling on a smaller scale before implementing it systemwide. 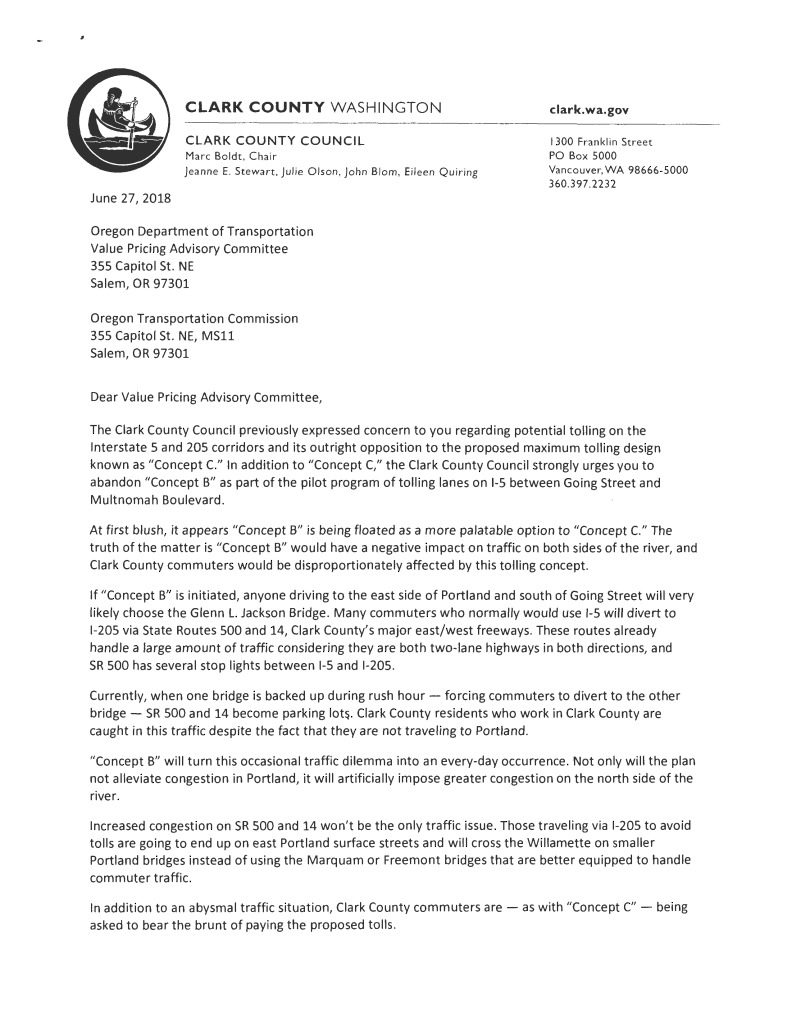 “We approved their pilot project because we wanted to see how they defined success,” McEnerny-Ogle said. “Being this is their first opportunity to implement tolling in the state of Oregon … we wanted to be a part of that discussion to evaluate it before they did a full implementation because … this is a bistate regional transportation system.”

The advisory committee recommendation has suggested tolling all lanes between Southwest Multnomah Boulevard and Northeast Going Street on I-5 — known as Concept B — as well as tolling near the Abernathy Bridge and Stafford Road on I-205. The recommendation was to then toll the bulk of I-5 and I-205, if the first phase goes smoothly.

“I felt we were part of the implementation but also part of the decision-making process,” she said. “If this is going to go forward like that, this removes us completely.”

Rep. Jaime Herrera Beutler, R-Battle Ground, has been outspoken against Oregon’s plans to toll since the guiding legislation was passed in 2017. 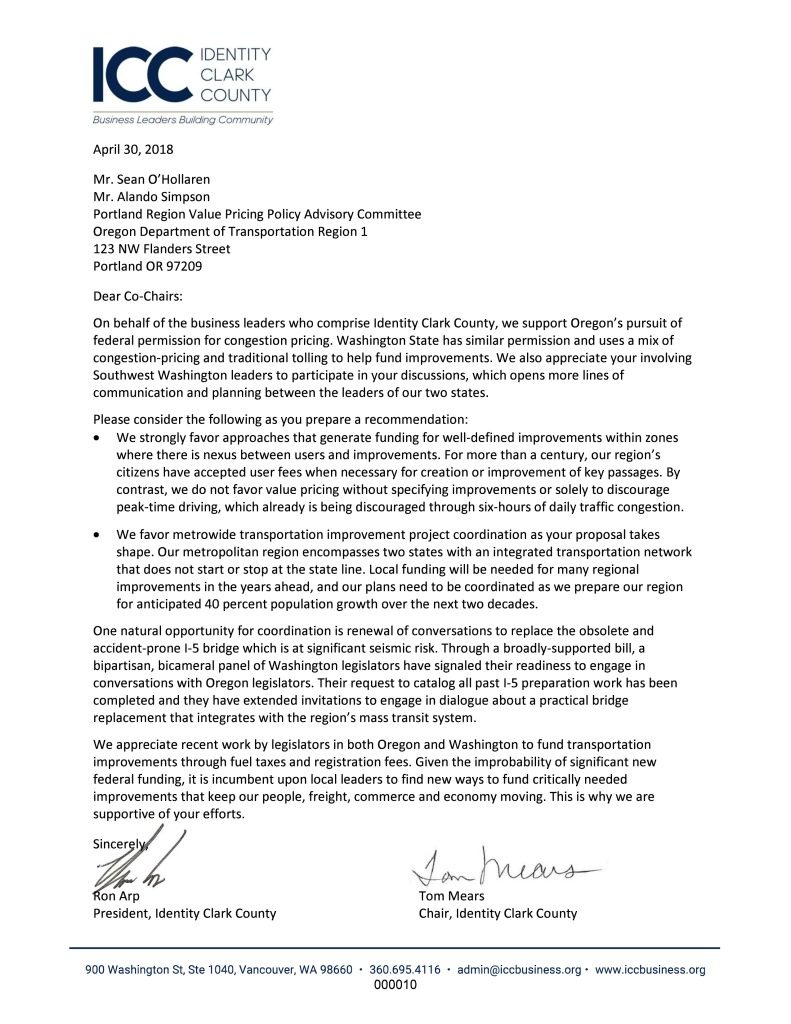 “This is a money grab, plain and simple,” Herrera Beutler said in reaction to Portland’s most recent letter. “I urge Gov. (Jay) Inslee and my colleagues in the Senate to join me in opposing this unfair scheme in the strongest possible terms before it’s too late.”

The final decision will be made by the OTC, which plans to make a recommendation to the Federal Highway Administration by Dec. 31. The FHA will have final approval of any tolling plans.

The Vancouver City Council, Clark County Council, C-Tran and RTC all sent letters to the commission expressing their concerns with the proposed plans and asking to ensure Washington is included in any planning discussions.

Vancouver’s council asked for any proposal to minimize impacts on Southwest Washington commuters. C-Tran asked Oregon to exempt transit from any tolling and consider sharing the revenue. RTC outlined parameters to make sure the board could provide feedback as planning moves forward.

“The truth of the matter is ‘Concept B’ would have a negative impact on traffic on both sides of the river, and Clark County commuters would be disproportionately affected by this tolling concept,” the letter reads. “As local elected officials, we understand and appreciate the importance of keeping infrastructure safe and transportation moving. That said, we do not believe that alleviating the congestion that takes place in Portland should be disproportionately paid for by Clark County commuters.”

Straying from the herd is business leadership organization Identity Clark County. The group sent a letter of its own to the committee in April supporting tolls.

“We strongly favor approaches that generate funding for well-defined improvements within zones where there is nexus between users and improvements,” the letter reads.

Identity Clark County said it does not support tolling without specified improvements or solely to discourage peak-time driving. The group also identified the I-5 Bridge replacement as an opportunity to coordinate a regional transportation plan.

“Given the improbability of significant new federal funding, it is incumbent upon local leaders to find new ways to fund critically needed improvements that keep our people, freight, commerce and economy moving,” the letter concludes. “This is why we are supportive of your efforts.”

Now that the advisory committee has made its recommendation to the OTC and disbanded, the OTC is hosting its first public hearing on the matter Thursday. Among several hours of scheduled public comment, former advisory committee members will share their final input on the proposal.

McEnerny-Ogle said she’s arriving at the meeting early to sign up for a speaking slot, and she will likely be joined by a few RTC board members. Quiring said she’s unsure if she will make it, but hopes the commission takes each agency’s letter to heart.

“I really wish there would be more of a cooperative attitude,” Quiring said. “We’ll see what happens at the OTC meeting. Maybe they will take that more into account.”

Tags
I-5 Bridge
Receive latest stories and local news in your email:
By signing up you are agreeing to our Privacy Policy and Terms of Service.