The homeless day center slated to open this fall in central Vancouver raised concerns and questions among residents of surrounding neighborhoods who weren’t sure what to expect.

Will people be allowed to camp? What about trash? How will the city make sure the day center lives up to certain standards?

A new document, called the good neighbor commitment, outlines the city’s commitment to addressing those concerns.

“It’s our commitment to the neighborhood of what we will do,” said Peggy Sheehan, community and economic development programs manager. She fielded a lot of questions during public forums about the day center. “It just seems like the right thing to do to let folks know what to expect.”

The good neighbor commitment was drafted by the city and representatives from the Maplewood and Rose Village neighborhood associations, the two groups that had appealed the city’s decision to use 2018 Grand Blvd., a former state Fish and Wildlife building, as a day center. (The appeal was later rejected by the hearings examiner and the city.)

“We just want to make sure there are some rules in place and there’s accountability,” said Cynthia Powers, chair of Maplewood.

She said her neighbors are wondering what’s going to happen if there are issues at the day center and how issues will be addressed in a timely manner. Neighbors are worried that an already troubled area will get worse.

“We’re told the police will patrol and that kind of stuff, but we don’t have enough police,” Powers said.

She said it’s great that people will be able to visit the day center and use its services, but neighbors are concerned about what will happen at night after it closes.

Some of the city’s commitments include:

• No camping will be allowed on site.

• A security company will monitor the site after hours.

• Police will have an office available inside the day center.

• Trash containers will be located inside and outside the building.

The good neighbor commitment has been presented to the Maplewood, Rose Village, Harney Heights, Central Park and Fourth Plain Village neighborhood associations. Sheehan is gathering feedback from the associations that will be presented to Vancouver City Council before the day center opens this fall. 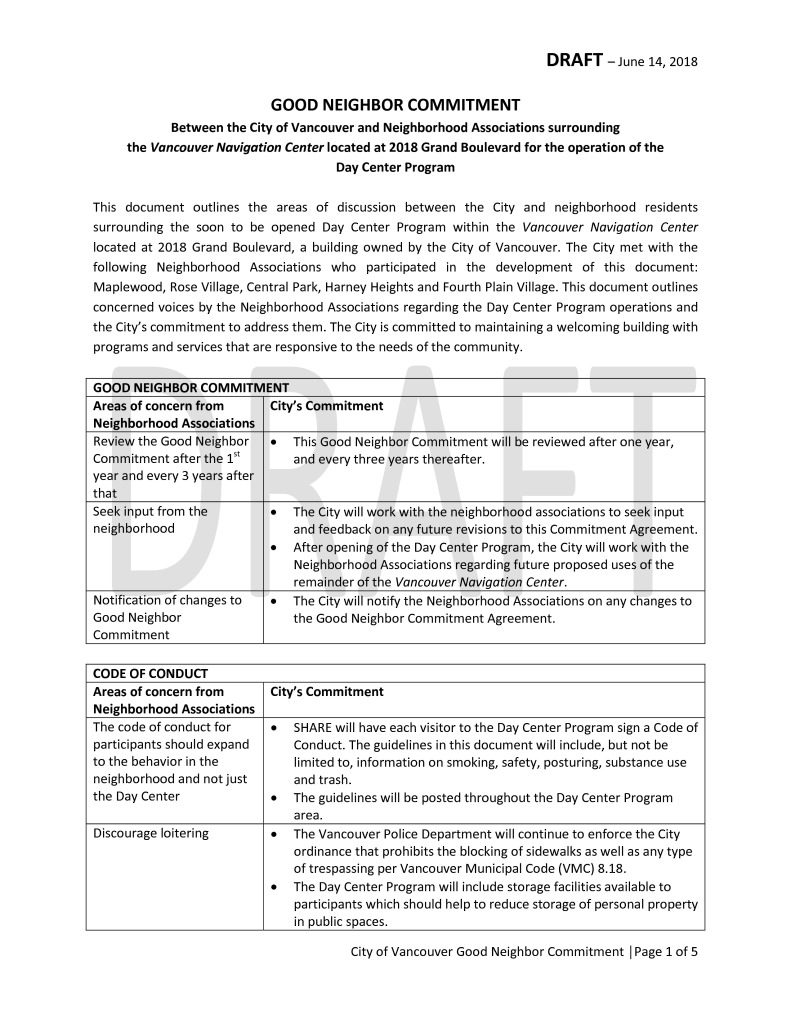 Jamie Spinelli, who lives in Central Park, said it seems like people want to make sure existing laws and ordinances are regularly enforced.

“I think that all the requests sound very basic,” she said.

Spinelli advocates for people experiencing homelessness through outreach work both at her job with Community Services Northwest and in her free time with the nonprofit Food With Friends. She volunteers time providing showers at the current day center at Friends of the Carpenter and doesn’t feel like the day center has had a major impact on the surrounding area. Some people have based their opinions and expectations for the future day center on what occurs around Share House, the men’s homeless shelter, rather than the current day center, Spinelli said.

Chris Prothero, chair of Harney Heights, said the good neighbor commitment was brought to their meeting last month and residents are “cautiously optimistic.”

“It was met with positivity but a little bit of skepticism on whether the city would come through on their end to the extent that the neighborhoods are hoping for,” he said.

He said people would like to see more specific commitments, such as the city committing to having a police officer at the day center for a certain amount of hours each week. That would create a more clear benchmark for accountability, Prothero said.

The Harney Heights neighborhood association formally supported the day center relocating to 2018 Grand Blvd., which was shared during public testimony.

“We really hope it becomes more of a community center than the stigmatic homeless day center” and includes other social services, Prothero said.

Last year the day center, which is operated by homeless service provider Share, assisted 952 people. Of those, 160 got help with employment and 102 were helped in finding housing.

Tags
Central Vancouver
Receive latest stories and local news in your email:
By signing up you are agreeing to our Privacy Policy and Terms of Service.