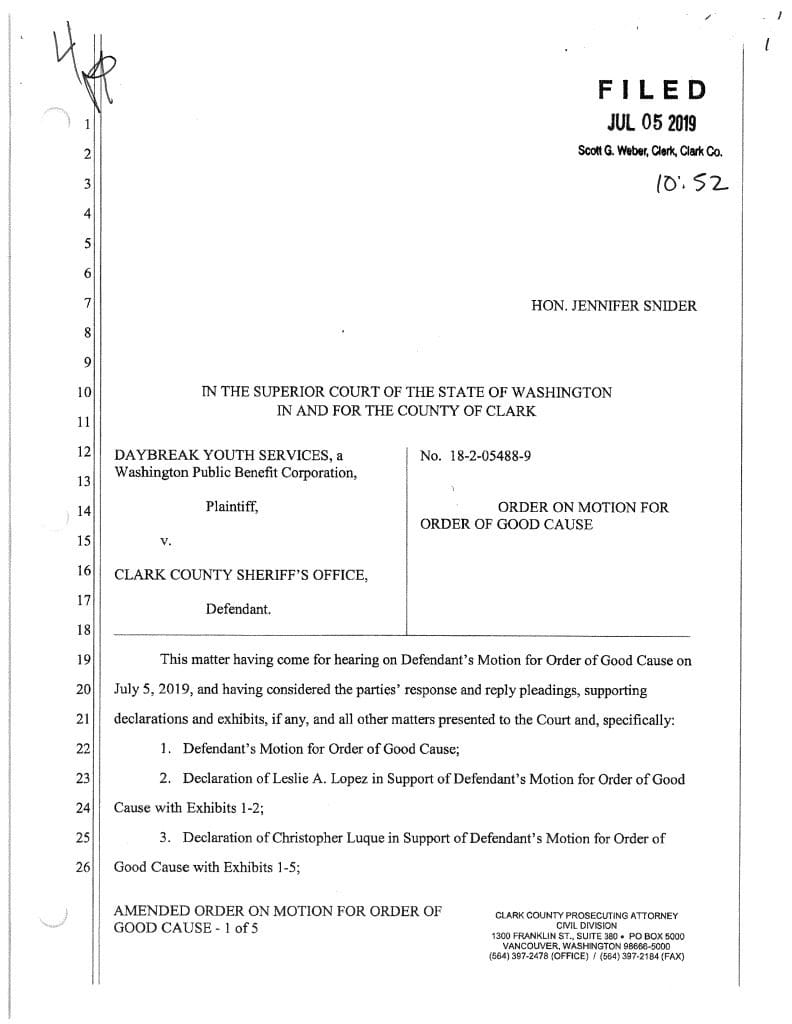 It’s the second time a local judge has determined the warrants were valid, according to state prosecutors.

Judge Jennifer Snider ruled the records obtained by the Clark County Sheriff’s Office could not have been secured through other methods; public interest and a need for disclosure in relation to a criminal investigation outweighs potential harm to patients and their treatment; and the records have been properly handled to protect confidential information.

The sheriff’s office started investigating alleged criminal conduct at the Brush Prairie youth outpatient and inpatient mental health and substance abuse treatment facility, 11910 N.E. 154th St., in June 2018. Among the allegations are instances of sexual contact, problems with client and staff safety, and what investigators saw as a pattern of inadequate reporting as required by law. Investigators served a series of search warrants Sept. 11 at the facility.

The investigation was turned over to the Clark County Prosecuting Attorney’s Office for consideration of charges earlier this year. The prosecutor’s office did not immediately have an update on the status of the review.

Daybreak has been contesting the legality of the search warrants since the beginning of the investigation. The Brush Prairie facility’s operational licenses were renewed and remain active. The state Department of Health’s revocation process of those licenses, prompted by the criminal investigation, and Daybreak’s appeal continue to move forward.

In response to Friday’s rulings, Daybreak CEO Tom Russell said in a prepared statement that “Daybreak is disappointed that the court failed to understand the legal and factual background of this case and has but no choice to appeal the order retrospectively finding good cause for the Clark County Sheriffs Office’s violation of the requirements of (federal law).

“Our main focus continues to be making sure we provide the best service and care possible for our youth who made the courageous decision to seek help and healing,” Russell said.

Daybreak previously filed a motion in Superior Court to halt investigators’ examination of the information shortly after it was seized and limit their search. Judge Robert Lewis told attorneys for Daybreak that deputies were acting within the scope of warrants issued by the court and denied their request for a temporary restraining order.

In June, Daybreak filed a complaint for injunctive relief in U.S. District Court in Tacoma. Citing federal law, Daybreak asked a judge to declare that materials seized in September by investigators was done so illegally. U.S. District Court Judge Benjamin Settle on June 19 denied a motion for a temporary restraining order, similar to the order argued in Superior Court. However, the federal case is still active. 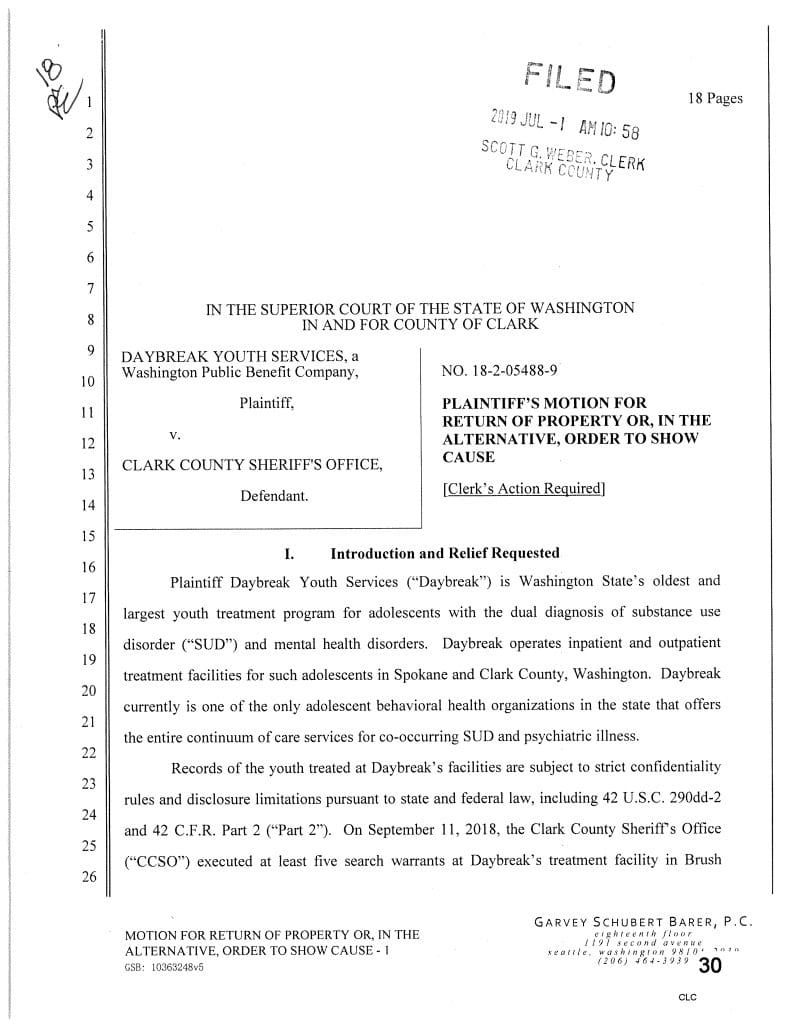 As with the federal case, the nonprofit agency argued in recent motions, locally, that the sheriff’s office violated 42 C.F.R. Part 2, which is meant to prevent the disclosure of identities of patients seeking substance use disorder treatment and facilities’ patient records.

Disclosure to police is allowed under certain circumstances, such as “extremely serious” crimes, but Daybreak attorney David H. Smith has said investigators cannot claim the allegations fit that criteria.

Smith argues the methods deputies used to obtain search warrants violated the federal law “in a myriad of ways,” including that the affidavits publicly disclosed the names and birthdates of minor patients, and detectives did not request a disclosure of portions of patient records, which would return the materials they desired.

In her order, Snider ruled the sheriff’s office must return or destroy copies of certain electronic data seized from Daybreak, because it is not necessary for further investigation.

Snider also ruled that no information obtained through the warrants may be used for investigation or prosecution of patients in connection with any alleged crimes. She did not stipulate the same action for Daybreak employees.

Instead, she said deputies are allowed to contact and interview current and former employees in relation to the criminal investigation, “without prevention or interference by Daybreak or its attorneys,” Snider wrote. The employees can decide whether they want to be interviewed.

From the perspective of the sheriff’s office, there is not much need for further interviews.

“Pending any new information, our investigations are complete and have been submitted to the prosecuting attorney’s office for review,” Undersheriff Mike Cooke said in an email.

In a separate order, Snider ruled the court will seal the original search warrants and supporting affidavits, and the sheriff’s office will refile redacted versions.

Smith said in a previous email to The Columbian there are key points about the investigation not being heard by the public. Among the points, Smith said the agency has no reason to believe that staff members engaged in sexual misconduct with patients. Additionally, he said, Daybreak’s patients have histories of trauma and behavioral disorders, and the incidents of fighting and sexual misconduct are often a symptom of underlying behavioral health needs.

Tags
Orchards, Sifton & Brush Prairie
Receive latest stories and local news in your email:
By signing up you are agreeing to our Privacy Policy and Terms of Service.