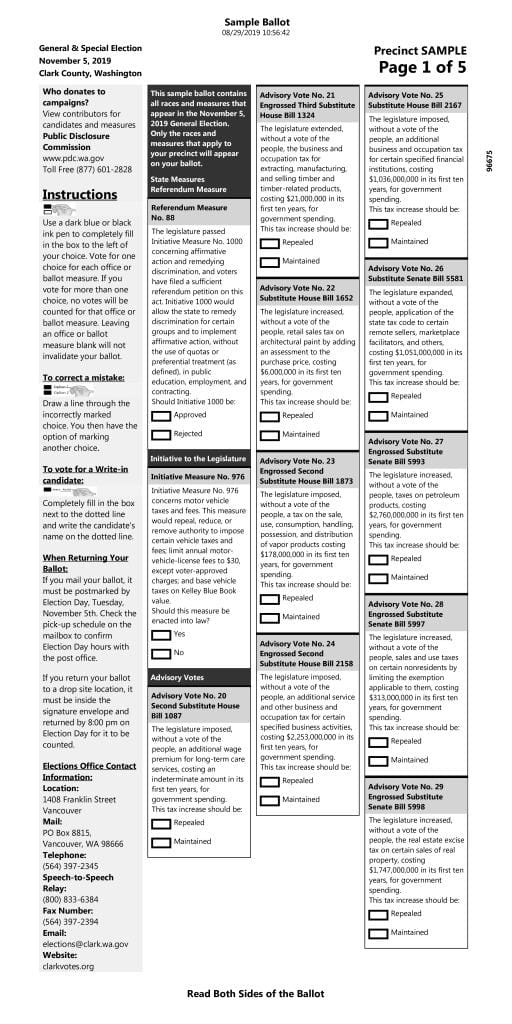 There’s something particularly off about the off-year election on Tuesday.

While there might not be big name races in this year’s election, many items on the ballot are bucking trends we’ve seen in recent years in Clark County.

In previous years, the proposed oil terminal brought a lot of attention and a lot of outside dollars to Vancouver for port races. This year, Dan Barnes and Jack Burkman are competing for a seat on the Port of Vancouver’s commission in a relatively quiet race.

Conversely, this year cash is flowing to a few school board races, which are typically small-money affairs. In the race for Position 1 on the Vancouver Public Schools board, 29-year incumbent Dale Rice and Kyle Sproul both upped their campaign finance filing status with the Public Disclosure Commission from mini filing to full filing since the August primary, allowing them to raise and spend more than $5,000.

Normally placid Camas has arguably the most controversial ballot measure this year: a bond for up to $78 million to build a new 78,000-square-foot community center with a leisure pool, competitive pool, gym and community rooms. The high price tag and how city leaders reached their decision to ask voters for funding upset many around the town. Three residents were so angry, they launched last-minute write-in campaigns to get some new leadership into Camas.

In north county, a few Second Amendment activists are running for office. They came to local politics partly from demonstrating against Initiative 1639, the gun-control measure passed by Washington voters last year. Shauna Walters and Josh VanGelder are running for separate seats on the Battle Ground City Council, and Michelle Dawson is running for an open seat on the Yacolt Town Council.

Here’s a look at some of the key races coming up on Tuesday:

Four Vancouver City Council seats are up for grabs.

The race for Position 6 is likely to be the closest, with two nonincumbents seeking the seat after clawing their way through a crowded primary.

Jeanne Stewart and Sarah Fox are both running for the seat currently held by Bill Turlay, who’s not seeking reelection. The two emerged from the August primary, pulling ahead of five other candidates in the race to earn about 22 percent of the vote apiece. Fox got more votes than Stewart, but just barely; she pulled ahead by 123 ballots.

Stewart has a long history in local politics. She served on the Vancouver City Council for three four-year terms and later was elected to the Clark County Council as a Republican in 2014. She lost her re-election bid to the county council last year, and launched a campaign to return to city council shortly after.

Fox is making her fourth bid for a city council seat in just two years — twice, she’s sought a city council appointment. Last year she ran for Councilor Laurie Lebowsky’s seat, but lost by about 3 percentage points. A U.S. Army veteran, Fox currently works as an urban planner for the city of Camas.

Tuesday’s election will take the temperature of Vancouver’s voters: do they want to return to a known leadership entity in the form of Stewart, or go for a new but persistent name in Fox?

Another notable matchup is the race for Position 5, between incumbent Ty Stober and his challenger, David Regan.

The two men are outspending everyone else running a city race, and collectively have spent more than $56,000 this election cycle on signs, mailers and other campaign expenses. Stober, especially, has reestablished his fundraising bonafides by out-raising everyone else seeking Vancouver office by more than triple; the incumbent had brought in around $75,000 as of Oct. 29.

Regan, a local bail bondsman, has been an active campaigner since declaring his candidacy in March, with an aggressive doorbelling strategy and appearances alongside Stober at neighborhood meetings and forums. This week, voters will decide whether Regan has done enough to overcome Stober’s incumbency edge.

Rounding out the Vancouver races are Position 2, which is being defended by incumbent Erik Paulsen against challenger Maureen McGoldrick.

Paulsen won his three-way primary in a landslide, earning nearly 65 percent of the vote to McGoldrick’s 20.5 percent. McGoldrick, a former attorney who participates in very little traditional campaigning, has unsuccessfully sought a spot on the council twice before, once in 2017, and again in 2018.

The Port of Vancouver commissioner race is a classic match between a seasoned veteran and a spirited newcomer.

Jack Burkman was elected to three four-year terms on the Vancouver City Council and served on several high-profile boards and commissioners, including 10 years on Clark College’s Board of Trustees.

Dan Barnes, whose only elective office has been a Republican precinct committee officer, is running a classic outsider campaign, promising to ask tougher questions and always remember he works for the public.

Both candidates are looking beyond the bitter fight over the rejected rail-to-marine oil terminal and have similar positions on redeveloping the Terminal 1 property west of the Interstate 5 Bridge and spurring job creation on other port-owned properties.

Burkman has more name familiarity, endorsements and campaign dollars than Barnes, who is countering by saying he will work to reduce the port’s property tax rate if elected.

The winner will succeed Jerry Oliver on the port’s three-person board of commissioners. Oliver opted not to run for a third six-year term.

Oliver has not made a public endorsement but is supporting Barnes. The other two sitting commissioners, Eric LaBrant and Don Orange, have endorsed Burkman.

Echoes of last year’s teacher strikes have defined this year’s school board races, resulting in more interest and more money in the Vancouver school district contest than usually shown in an off-year election.

Six candidates are competing for three slots on the Vancouver Public Schools Board of Directors. The candidates, which include several educators, are:

• Position No. 1: Dale Q. Rice, a wealth manager and 29-year incumbent of the school board, facing off against Kyle Sproul, a marketing and business strategist.

The Position No. 1 race in particular has been heated, with Sproul and Rice each spending thousands of dollars in their bid for the seat. Sproul has raised $14,598.94 between contributions and a personal loan, and spent $15,496.32, mostly on signs and mail campaigns. Rice has spent $14,332.20 of his own money, mostly on signs and advertising.

All other candidates for school board are mini-filing, a Public Disclosure Commission distinction that means they can only raise and spend up to $5,000.

It’s been a long campaign for Evergreen Public Schools board incumbent Rob Perkins and his opponent, Bethany Rivard. Rivard, a teacher at Fort Vancouver High School, announced her candidacy more than a year ago in the midst of ongoing teacher strikes.

The matchup for Evergreen Public Schools Board of Directors District No. 2 underscores the unusual number of educators running in school board races this year.

“I believe, as an educator and a part of the community, I can reach out to some of those groups who need more engagement,” Rivard told The Columbian’s Editorial Board in September.

It’s an issue prompting criticism of the Washington Education Association’s perceived influence in the upcoming election. Critics question whether teachers who are members of the teachers’ union can take an unbiased approach to issues affecting the district’s finances.

Educators like Rivard have said that criticism is just rhetoric that undermines their classroom experience and understanding of issues affecting children.

In the race for District No. 4, project manager Divya Jain is challenging Clark County deputy prosecutor Rachael Rogers. Jain, if elected, would be the only person of color on the board, and says she’s running to provide a voice for the nearly 44 percent of district students who identify as people of color. Rogers, the appointed incumbent, said she’s running to promote public engagement between the district and its families.

Victoria Bradford is also running to retain her District No. 3 seat, but is unopposed.

This November’s race for the Battle Ground City Council began as far back as April, when Patriot Prayer founder Joey Gibson and others tried to convince the council to take action against I-1639. They wanted the council to declare Battle Ground a sanctuary city against the measure, approved by voters statewide in November 2018. The councilors didn’t bite.

Yacolt councilors, however, did pass a resolution declaring Yacolt a sanctuary in June after public comments from Walters and the North County Sons and Daughters of Liberty, a group she started in April to combat I-1639, which concerns firearms. That activism has continued in the form of campaigning, as she is running for Position No. 3 on the council against Neil Butler. Councilor Steven Phelps is not running for re-election. In the three-way primary, Walters came out ahead, pulling in 49.26 percent of the vote compared with Butler’s 32.96 percent.

Philip Johnson is running for re-election at Position 7 against VanGelder, another local activist whose foray into politics came through protesting I-1639.

More recently, Rhiannon Parks announced herself as a write-in candidate for Position No. 2 against Shane Bowman. Parks was helping out Walters on the campaign trail when she decided to make a run for council herself.

In the only partisan race this year, Republican Clark County Councilor Gary Medvigy faces a challenge from Democrat Adrian Cortes for the council’s District 4 position. Medvigy emerged from the Aug. 6 primary election with 58.14 percent of the vote, compared with the 41.54 percent received by Cortes. The winner will serve a one-year unexpired term.

In separate interviews with The Columbian’s Editorial Board, Cortes spoke about the dangers of the county council approving a plan to open 2,200 acres of land north of Vancouver near the 179th Street/I-5 interchange for development. Medvigy spoke in his interview about his goal for no new taxes, while saying it would be irresponsible to promise that.

Only voters who live in that district, which includes northern Clark County, will vote in this race.

Tags
Battle Ground & HockinsonClark County GovernmentEvergreen Public SchoolsPort of VancouverVancouver City CouncilVancouver Public Schools
By signing up you are agreeing to our Privacy Policy and Terms of Service.