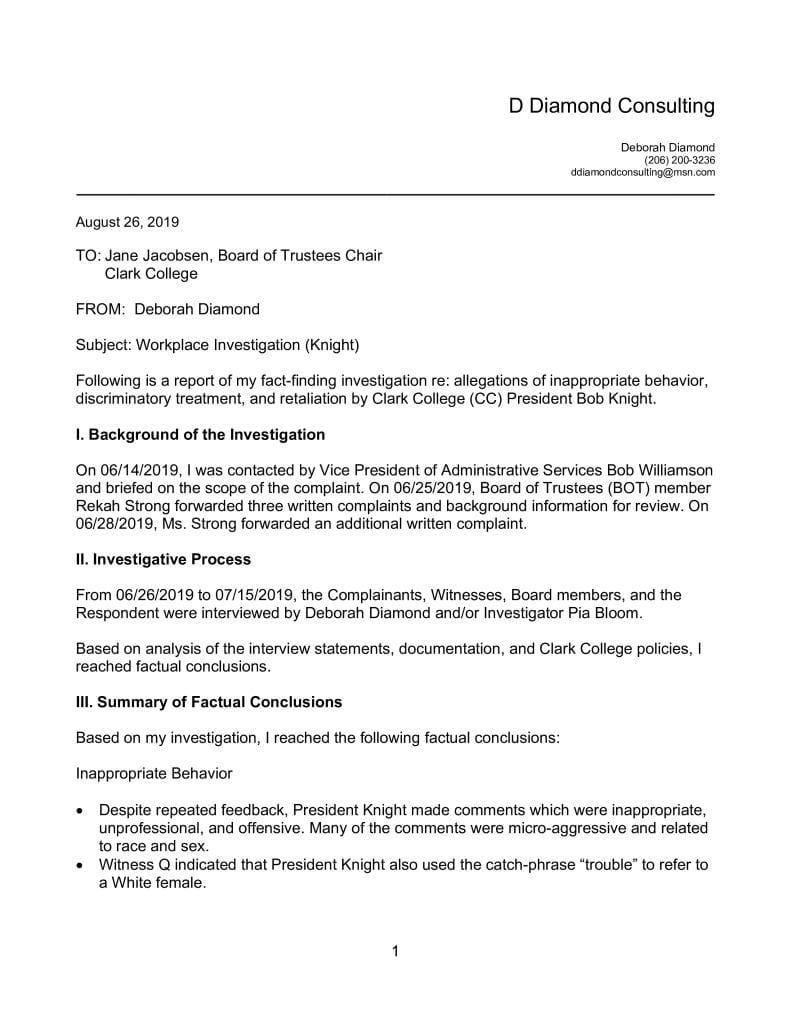 Former Clark College President Bob Knight engaged in inappropriate, discriminatory behavior against women, and particularly women of color, during his tenure at the Vancouver community college.

That’s according to an investigatory report provided to The Columbian on Friday in response to a public records request, which highlights details of Knight’s offensive comments, as well as his interference in the hiring process of a permanent vice president of Diversity, Equity and Inclusion.

The Clark College Board of Trustees on Oct. 29 determined four complaints that Knight violated the college’s non-discrimination and harassment policy were founded. Clark College would not comment further on the details of the now-public report because it is a personnel issue.

Knight, who retired in July, released a public statement through Portland public relations firm Lane Finn saying he disagreed with the trustees’ ruling.

“It was an honor and a privilege to serve the community as the president of Clark College for 13 years, and I consider my productive tenure at the college as the capstone to my career,” Knight wrote.

But, in a statement, Interim President Sandra Fowler-Hill said the college “acknowledges the seriousness of the claims and the findings made by a preponderance of the evidence as identified by the Board of Trustees.”

The 228-page report by D Diamond Consulting, a Seattle firm, detailed the complaints filed by the four unnamed individuals and the findings in each complaint. Clark College paid D Diamond $13,000 for the report.

The report also details occasions when Knight “tokenized” women of color he had recently hired, using their names to prove that he cared about diversity on campus.

“In essence, he was saying that he did not hire us because we were talented individuals in our field or the most qualified candidates, but hired us just because we are women of color,” one complainant told the investigator.

Multiple witnesses reported they had told Knight multiple times that his comments were inappropriate, but Knight did not change his behavior.

“He cultivates a facade of cluelessness and said he is just kidding, but he has repeatedly been made aware of the impact of his words and actions,” a witness told the investigator.

The report also details Knight’s behavior at a graduation ceremony for LGBTQ students. Knight asked a person he had hugged if she was “going to accuse me of one of those Me Too’s,” a reference to the global movement against sexual harassment first started by civil rights activist Tarana Burke.

“We both found this comment to be out of touch with Clark College’s values and mission, regardless of President Knight’s clearly humorous intentions,” an unnamed person wrote in an email to one of the complainants.

In his response to the investigator, Knight said he had called people “trouble” in an affectionate tone during his entire tenure, and said he did not recall the other specific comments he’d been accused of making.

“During my 13 years as president of Clark College, I have spoken publicly hundreds of times,” Knight told an investigator. “If I have said things that made people feel uncomfortable, I have apologized, learned from it and resolved to do better.”

The report also details Knight’s interference into the search for a permanent vice president, canceling the recruitment process due to perceived “inequities” in the process.

Though the report does not identify the department, additional public records show Knight unilaterally halted the hiring process for the vice president of Diversity, Equity and Inclusion. Knight sent an email at the end of May after months of searching that said none of the candidates identified by the consulting firm met the “minimum qualifications” for the position.

One of those applicants was the woman serving in that position in an interim role, identified in the report as Witness P. The report does not identify the woman. However, the only woman who fits that description is Rashida Willard, who served in the interim position for 17 months. The college announced Thursday that Willard was promoted to the position permanently.

The investigator found that, during her interim tenure, Willard was paid less than her white male peers who served in similar temporary roles. She was also required to give written notice to the college’s executive cabinet, a team of vice presidents and college directors, when she decided to apply for the position. Knight had not expected the same of white men in interim positions.

The investigator also found that Knight personally challenged Willard’s experience and pressured a recruitment firm to remove her from a list of finalists.

While there were procedural issues in the search process, the investigator found, Knight’s “primary intent” in canceling the search was, “more likely than not,” an attempt to stop Willard from being a finalist.

In her original complaint, Willard, identified as Witness P, wrote that she “consistently faced discrimination, tokenization and bias” serving on the executive cabinet.

“I fear for whomever comes into the position after me,” she wrote. “I worry about how black and brown people will be treated when they come into the institution.”

Clark College has been under public scrutiny for how it treats people of color for many months, since Oregon Public Broadcasting reported outstanding equity issues at the community college campus in 2018.

The report is the latest moment of reckoning for the Vancouver campus.

The Clark College Board of Trustees has tasked Fowler-Hill, who will serve in the position for a year, with a lengthy to-do list to address the problems. By the end of March 2020, she is supposed to:

• review and update the performance evaluation process for the college president and members of the college’s executive cabinet, a team of vice presidents and college directors;

• establish standard practices for setting salaries for staff serving in an interim position;

• and establish a process for complaints made against the college president, executive cabinet members or board of trustees.

The college also announced Friday that it had authorized the hiring of a director of compliance, a new human resources position who will oversee the college’s compliance with ethics and anti-discrimination laws.

Fowler-Hill said in her prepared statement that the college “is taking the lessons learned from this to make systemic and sustaining changes with support from leadership.”

“In respecting the dignity of this process, I hope we can focus on the changes that need to occur,” Fowler-Hill wrote.