Political voices on both sides of the Columbia River are striking a positive tone and avoiding past battles as they launch a second effort to replace the Interstate 5 Bridge.

Lurking beneath the veneer of tranquility are the same issues that polarized the region a decade ago: opposition to tolling, hostility toward light rail, support for a third Columbia River bridge, concerns about climate change, and a sneaking suspicion this $3 billion-plus megaproject will cost too much and deliver too little.

The size and complexity of such a massive project can lead to its downfall.

“Most megaprojects don’t succeed,” said Aaron Shenhar, an international expert on project management and CEO of The SPLWIN Group in Verona, N.J. “If anybody starts a megaproject today, they must realize that their chances for success are as good as the statistics.”

Officials are optimistic a new set of local and state political leaders, coupled with mounting frustration over daily traffic jams and the potential to substitute bus rapid transit for light rail, will make the project’s reboot successful.

Congestion and your pocketbook

Traffic jams on the two freeways into Portland cost commuters more than aggravation.

The Washington State Department of Transportation places a monetary value on time and gas wasted in congestion.

Those two figures cover only Washington congestion, not how much additional time and gas is wasted sitting in Oregon congestion.

“We can’t be pussyfooting around,” Vancouver Mayor Anne McEnerny-Ogle said. “Let’s get serious and get this done.”

Some in the business community perceived the Columbia River Crossing as a government project that naturally would get built, McEnerny-Ogle said, and stayed on the sidelines.

“It was a surprise to many that it didn’t happen, so we now have all hands on deck,” she said. “They are all jumping in to talk and to work and to educate their folks on why it’s important.”

McEnerny-Ogle, who led an apology tour to get Oregon re-engaged following the Washington Senate’s inaction six years ago, has worked to overcome reluctance from those who still feel burned by the Columbia River Crossing’s demise.

Some are reluctant to dissect past failures and discuss what was learned.

Kris Strickler, who last month was named Oregon transportation director pending Senate confirmation, worked on the Columbia River Crossing. In an internal Oregon Department of Transportation interview posted on YouTube, Strickler said there are aspects of that project he would handle differently. Instead of discussing lessons learned, he talked about the need for “jurisdictional and stakeholder input” to help define what didn’t go well.

“What we know is the congestion has gotten significantly worse, the economy is being hampered, the bridge is still there and we have a significant need to replace it,” he said. “So if you can focus on the knowns and be reflective at the same time, I think that’s a good recipe.”

Carley Francis, Washington State Department of Transportation’s southwest regional administrator, is another veteran of the Columbia River Crossing. A planner by profession, Francis worked on the failed project for more than six years and served as its spokeswoman, answering media questions and helping disseminate information to those dubious of the project’s merits.

Today, Francis is working behind the scenes to lay the foundation for a second project that will build on previous work. She has met with each member of Clark County’s legislative delegation to establish and maintain communication lines in hopes of avoiding a second legislative defeat.

Francis is focused more on developing a plan for how to move forward, instead of pinpointing what will be built in bridge, freeway and transit elements.

The I-5 Bridge’s two spans opened in 1917 and 1958. The bridge started reaching capacity during weekday peak hours nearly 30 years ago, within a decade of the December 1982 opening of the Interstate 205 Bridge. The second bridge led to massive growth in Clark County, where the population increased by 45 percent during the 1990s.

Since the Columbia River Crossing ended in 2013, Clark County has added another 53,000 residents. During those six years, Vancouver’s population grew by almost 3,500 residents a year. Ridgefield, one of the fastest growing cities in Washington, has seen its population skyrocket by 60 percent since 2013.

More growth often means more congestion. About 135,000 vehicles a day use the I-5 Bridge. According to the Southwest Washington Regional Transportation Council, I-5 near the bridge is congested for 11 hours on weekdays, from 5:45 to 9:45 a.m. north of the river and from 1 to 8 p.m. south of the river. Traffic crawls at only 11 mph during peak congestion.

The I-5 Bridge is a traffic chokepoint in the Portland region. INRIX, a Kirkland-based traffic analytics firm that issues an annual traffic scorecard, ranked Portland as having the nation’s 10th worst congestion that costs drivers $1,625 a year in wasted time.

The American Transportation Research Institute lists I-5 at the Columbia River as the nation’s 29th biggest truck bottleneck. According to statistics compiled by DKS Associates, a transportation engineering and planning firm, 65 percent of weekday truck traffic from the Port of Vancouver heads south on I-5.

State Sen. Annette Cleveland, D-Vancouver, said the I-5 Bridge prompted her to first run for the Legislature in 2012. Decades ago, she remembers driving to Portland while in high school and encountering a chain-reaction crash with fatalities on her return trip, a memory that remains vivid today.

Eight of the nine state lawmakers from the 17th, 18th and 49th legislative districts agree the top priority is replacing the I-5 Bridge, Cleveland said.

“What’s different is we are starting from a place of a shared goal,” she said. “We have consensus, and that is entirely different from the past.”

Cleveland said the group’s only holdout is state Rep. Vicki Kraft, R-Vancouver, adding that Kraft may still fall in with the rest of the delegation.

“None of us who have been working on this on this side of the river dispute there needs to be more bridges in the future,” Cleveland said.

The delegation also agrees that a new interstate bridge must have a transit component, Cleveland said, but it hasn’t locked onto connecting to Portland’s light-rail system or expanding C-Tran bus rapid transit service, which is operating on Fourth Plain Boulevard and could begin service on Mill Plain Boulevard in 2023.

Nearly a quarter century has passed since Clark County voters trounced a February 1995 plan to increase sales and motor vehicle excise taxes to help finance a light-rail line to Hazel Dell. Light rail remains a hot button issue for those who consider it emblematic of everything they don’t like about Portland and don’t want to see here.

Portland leaders aren’t saying, “No light rail, no bridge,” at least not publicly. In August, Portland’s mayor, Metro’s council president, a Multnomah County commissioner and the executive directors of TriMet and the Port of Portland signed a three-page letter to Oregon Gov. Kate Brown and Washington Gov. Jay Inslee outlining their support for a bridge replacement project.

New I-5 Bridge project: Here we go, again … again
Political voices on both sides of the Columbia River are striking a positive tone and avoiding past battles as they launch a second effort to…

Megaprojects over time, over budget?
Replacing the Interstate 5 Bridge and other megaprojects are inherently difficult because of their size and complexity. 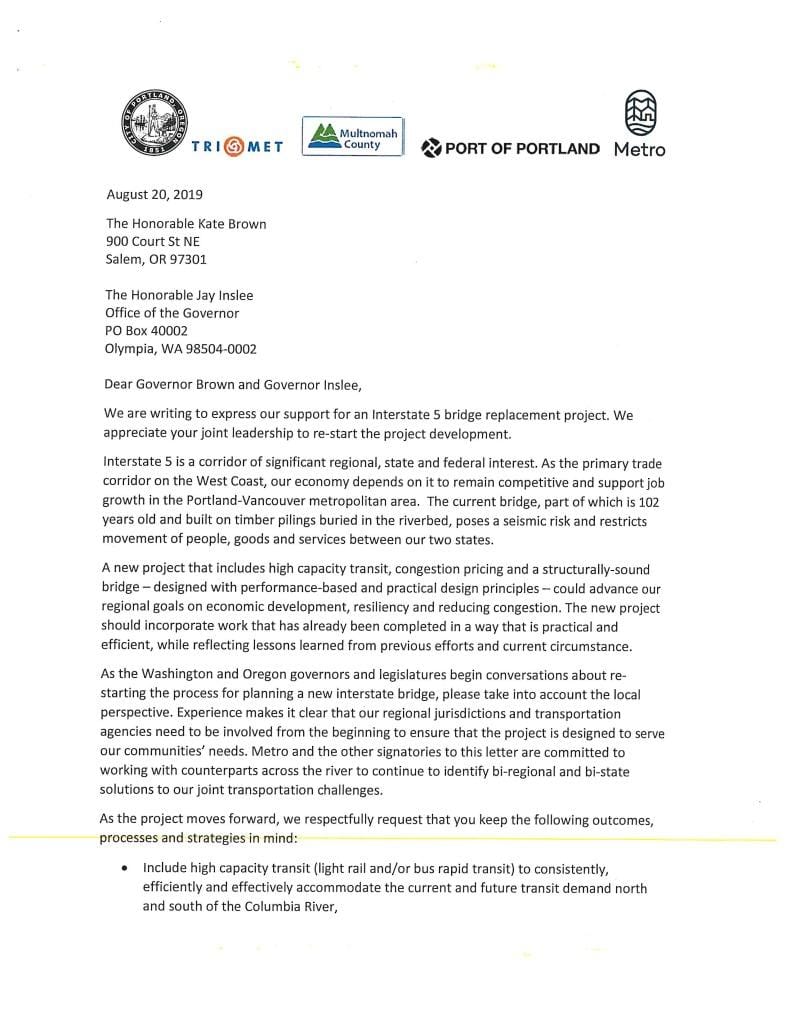 The carefully worded letter stakes out general positions and a “must have” framework for moving the project forward, including:

• facilities and connections for cyclists and pedestrians.

• features for autonomous vehicles and other emerging technologies.

“That jumped out at us,” she said. “With new leadership on both sides of the river, with new individuals, we need to take advantage of the new opportunities.”

Officials are charging forward, hoping to ride the current wave of positivity all the way to groundbreaking.

McEnerny-Ogle said she believes the community is gradually accepting that tolling will be part of any future project.

We'll be in touch if we look into your question.

Thanks for submitting your Clark Asks question. If we're able to investigate it further, we'll get in touch with you. Feel free to encourage your friends to ask questions, too!

“Everyone would like to have the federal government pay for this like they did on I-205,” she said. “Those days are long gone.”

“Every bridge and freeway under construction in the United States right now has tolling,” she added. “The government is not going to buy us a bridge. We are going to have that third leg on the stool.”

U.S. Rep. Peter DeFazio, D-Ore., is in a critical position to deliver federal money to the project as chairman of the House Transportation and Infrastructure Committee. McEnerny-Ogle said she has met with DeFazio to discuss the new bridge project.

“He wants to replace the bridge,” she said. “He wants to make this work. He knows the importance of this, not just for congestion and for commuters but for safety and economics.”

“This is a crucial project for families and commuters in Southwest Washington that will ease congestion throughout the area,” she said in a statement to The Columbian. “I’m glad our state leaders prioritized funding for the first steps in replacing the I-5 bridge in the state budget earlier this year, and as a voice for Washington state in the Senate, I’ll continue fighting in the other Washington to strengthen federal investments in our state’s infrastructure priorities and ensure residents on this side of the Columbia River have a seat at the table as this process moves forward.”

President Donald Trump came into office touting the importance of rebuilding the nation’s roads, bridges and airports, but every effort to launch “infrastructure week” gets quickly derailed by a presidential tweet storm on unrelated issues.

McEnerny-Ogle said her worst fear is “the federal government never does put money into infrastructure, that we are completely on our own.”

“I think that would be the deal killer,” she said.

Tags
Interstate 5 BridgeRoads & TransportationWest Vancouver
Receive latest stories and local news in your email:
By signing up you are agreeing to our Privacy Policy and Terms of Service.