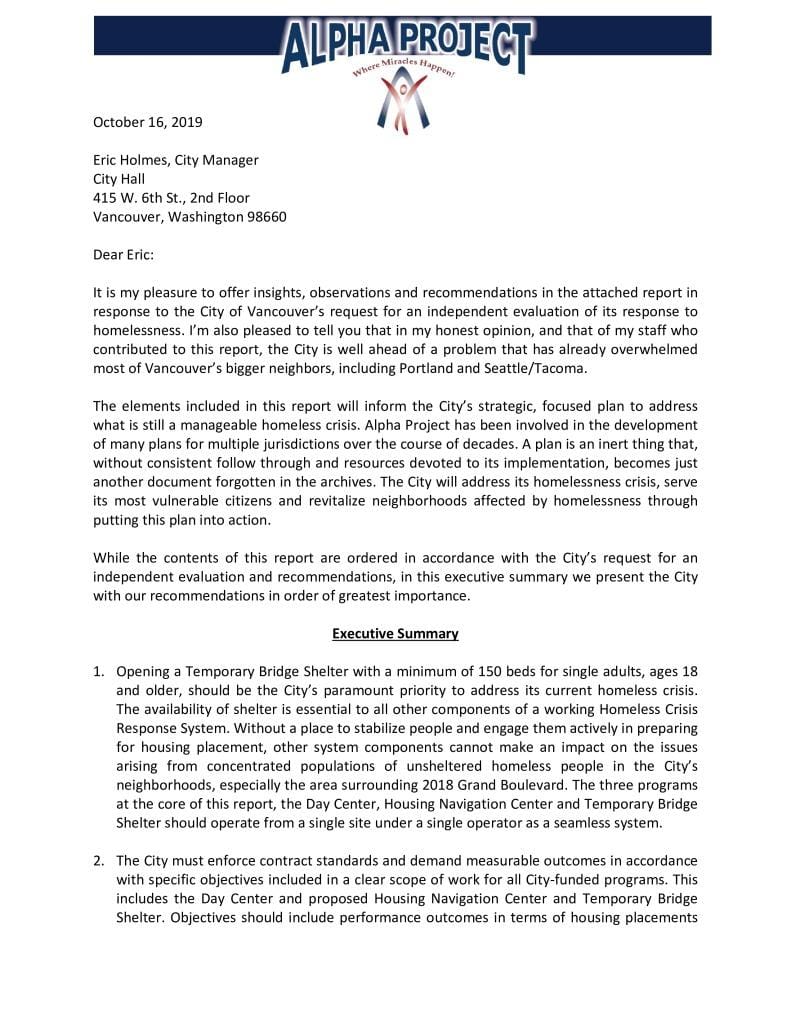 Opening a temporary bridge shelter at the Vancouver Navigation Center tops Alpha Project’s list of recommendations to improving the city’s response to homelessness, according to a report made available Friday.

The San Diego-based homelessness nonprofit believes a shelter, ideally requiring people to carry membership cards to gain access, could be fully operational within 90 days of choosing an operator.

The report was commissioned by the city and paid for by the Ed and Dollie Lynch Fund held at the Community Foundation for Southwest Washington. Jennifer Rhoads, the community foundation’s president, said Thursday that it had not yet received a contract from Alpha Project.

Homeless Resource Manager Jackie St. Louis said city staff are still reviewing the 44-page report, so it has not been scheduled for discussion by Vancouver City Council, which in July called for an independent third-party review of the contentious Vancouver Navigation Center.

The move came about as the city was poised to approve a major reorganization of Clark County’s homelessness response system, forming a Joint Executive Board on Homelessness. It’s been on hold pending this report.

The city is considering swerving on its homelessness strategy. The homeless service center in central Vancouver, nearing its first anniversary, has been a source of complaints and criticism from the city council and neighbors.

A seven-member delegation from Alpha Project visited Vancouver from Sept. 4 to Sept. 6.

In a prior interview with The Columbian, Alpha Project President Bob McElroy said his report was “going to piss people off.” His organization is best known for its 324-bed bridge shelter, a reinforced tent that was erected in response to a hepatitis A outbreak among San Diego’s homeless population. The shelter has attracted attention from all over the country and is touted as an alternative to pushing a “housing-first” philosophy.

In his media interview and subsequent report, McElroy said Vancouver is well ahead of neighboring Portland and the Seattle/Tacoma area.

“The city should proceed with its planned, urgent response to homelessness in part because the problem is, at this point, still solvable,” the report said.

Alpha Project’s chief priority for the city is opening a 150-bed bridge shelter at the same site as the current Vancouver Navigation Center, 2018 Grand Blvd. It further recommended that the shelter operate in conjunction with a housing navigation center and day center situated in other areas of the building.

“Without a place to stabilize people and engage them actively in preparing for housing placement, other system components cannot make an impact on the issues arising from concentrated populations of unsheltered homeless people in the city’s neighborhoods, especially the area surrounding” the Navigation Center, the report said.

The current Navigation Center has an on-site housing navigator and has discussed adding shelter space in the future.

It is unclear if the city has an operator for the proposed day center, housing navigation center and temporary bridge shelter “with the demonstrated capacity, experience and philosophy required to achieve the change desired in how the day center is operated and managed, as well as its impact on the neighborhood,” the report said. Homeless service nonprofit Share is currently operating the Navigation Center.

The report said the city could put the project out to bid to select an operator or create a nonprofit headed by community leaders “with a passion for the work required to transform the status quo response to homelessness. However it chooses to proceed, the city must demand a much different operational approach and connection to the community.”

More than 400 of Alpha Project’s San Diego shelter participants have transitioned to some form of housing or treatment programs. The nonprofit said it engages with a hard-to-serve, highly vulnerable population. Vancouver Mayor Anne McEnerny-Ogle, city councilors and City Manager Eric Holmes are among the many local officials who have toured the shelter. A second 150-bed facility is opening Friday in San Diego.

With “minimal retrofitting,” Alpha Project believes Vancouver could open a similar facility in three months’ time after selecting an operator. The shelter would be divided by gender and include safe spaces for youth, seniors, the disabled and gender nonconforming individuals and those in crisis.

The report emphasized that the goals outlined in Clark County’s Homeless Action Plan “are important and could be effective only to the extent that adequate shelter exists to make them so.” It noted that the city is one part of a much larger system already committed to addressing county-wide homelessness and that its goals may not always align with the broader system’s goals.

Alpha Project urged the city to enforce contract standards and demand measurable outcomes for all city-funded homeless programs. It also supported the city in its planned rollout of a Homeless Assistance Resource Team and the police department’s Homeless Outreach Team, which Alpha Project said require the existence of crisis stabilization beds and services. It also supports the Joint Executive Board’s creation so long that is doesn’t become “simply another layer of bureaucracy” and noted that St. Louis as homeless resource manager is a critical new addition to the homeless crisis response system and should be empowered to enforce city policy.

The report also says there are limits to focusing on permanent housing and the housing-first philosophy, which is the current federal and local standard.

“Not all people experiencing homelessness are capable of living independently without time to first stabilize and prepare for the transition from the street to permanent housing,” and “there are not enough affordable permanent housing units available in the city’s inventory to immediately house all people in need,” the report said.

Central Vancouver’s surrounding neighborhoods are unduly impacted by the Navigation Center, according to the report. It said participants “currently have no option but to leave the facility each afternoon and spill out into a neighborhood where they are not welcome and have no access to shelter. To change the current situation, the city will need to ensure that it selects an operator that is willing and committed to the desired change.” Such an operator would need to be committed to being a good neighbor and operating highly-visible programs that benefit the community, such as expanding litter control, graffiti removal and perimeter patrols. Homeless and formerly homeless people would help carry out these programs.

“In Alpha Project’s opinion, the current day center is poorly managed,” the report said. During its Sept. 4 site visit, “Alpha Project observed virtually no control over access to the facility, little client engagement, and an absence of any social modeling to shape and control client conduct. During the same visit, Alpha Project observed neighborhood impacts stemming from client conduct in the community and little effort to mitigate those issues or engage community interests in positive relationships.”

Changes such as issuing photo membership cards to all participants, controlling access to the facility through a single point of entry and modeling a code of conduct requiring appropriate behavior and participation in services would improve performance and mitigate neighborhood issues, the report said. “A day center membership card should be a privilege, not a right,” the report said.

It detailed physical and staff changes that could be made to better track who’s coming and going and to control behaviors happening on-site and in the adjoining neighborhood. “Misconduct observed in the neighborhood should result in the same consequences as violating the code of conduct for the facility,” the report said.

Repeatedly, the report said the city should set performances measurements and strict standards for accountability; outcomes would be reported monthly to the city.

The overall goal is to provide a safe place for adults “experiencing homelessness to receive bridge housing and appropriate services while preparing for permanent housing placement,” the report said.

When allocating a budget for a temporary bridge shelter, as well as a housing navigation center and day center, the city should consider several sources of funding such as government, private philanthropy and Vancouver Housing Authority, the report said.

In Our View: Vancouver Waterfront Gateway offers opportunity
EditorialsAugust 16, 2022
These areas of Washington are likely to get hotter -- but people keep moving there
Latest NewsAugust 15, 2022
Clark County Council weighs how to use $44.6M remaining from COVID stimulus
Clark County NewsAugust 13, 2022