As rich in tradition and culture as Kelso’s football program is, there’s never talk of a down season.

“There’s really not much opportunity for that,” head coach Steve Amrine said. “The expectations always are to play good, solid, competitive football and be in the hunt for a league title and get into the playoffs.

With the exception of Amrine’s first season at Kelso in 2013 (2-7 overall), the Hilanders are34-17 the past five seasons.

Kelso returns five starters on each side of the ball, and where the team’s strength is for 2019 lies in its skill-position players. 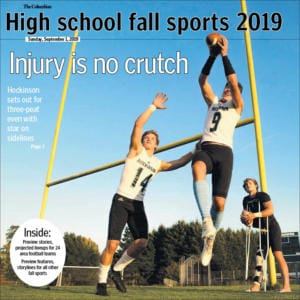 “We have enough guys who’ve played a lot of football to hold us together as everybody else learns.”

The duo combined for 33 touchdowns and nearly 2,000 yards of offense.

Amrine noted makes the duo special is their competitive nature.

“They play off each other,” he said, “and care about winning and being successful.”

Amrine projects the offensive line to average between 220 and 230 pounds, led by Seth Sutherby, who had 10 sacks in 2018 at linebacker, and second-team all-leaguer Cooper Lindgren.

New faces might emerge every year, but the tradition and culture message remains the same.

“It’s mattered here for a long time, and it will always matter,” Amrine said. “Coaches and players come and go, but the blue jerseys and gold helmets always play hard.”

— Hilanders have finished second in league to Mountain View past three seasons.