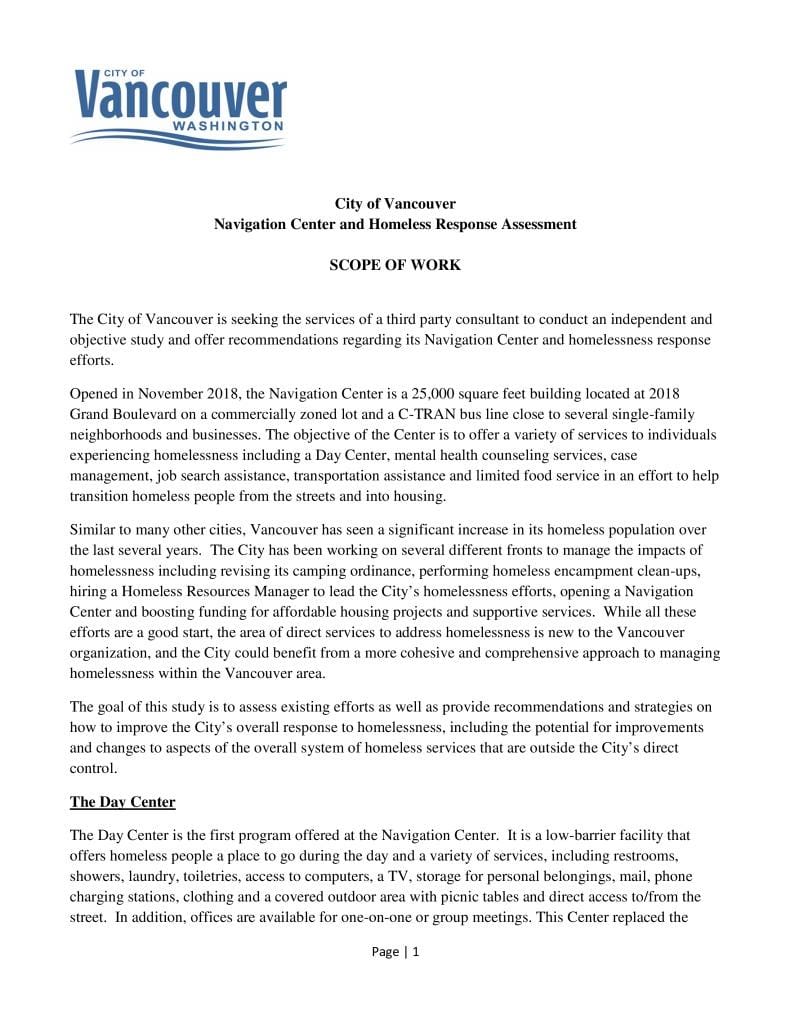 After two years of planning and discussions between local government officials and housing advocates, the Vancouver City Council was scheduled on Aug. 26 to take a vote on a major reorganization of Clark County’s homelessness response system, forming a Joint Executive Board on Homelessness.

But the vote was suddenly and quietly pulled from the council’s agenda. One reason was that the city had just hired Jackie St. Louis, Vancouver’s first-ever homeless resource manager, and wanted his input first.

Another reason for the delay was city officials were working behind the scenes with the Ed and Dollie Lynch Fund to hire Alpha Project, a San Diego-based homelessness nonprofit, to conduct a third-party review on the city’s approach to homelessness. The review included the Vancouver Navigation Center, a homeless services center that has been the subject of neighborhood complaints and criticism from the city council.

The decision to pull the vote was made quickly and involved decisions made outside of the city council’s normal public procedures. Although the city wanted the review, it was paid for with private philanthropy, which Andy Silver, a longtime local housing advocate and former executive director of the Council for the Homeless, described as a source of confusion. The move raised questions over just how transparent the city had been in calling for the review, and officials have been tight-lipped about its scope.

“The question is how wide is the assessment that Alpha Project is doing?” said Kate Budd, executive director of the Council for the Homeless — the county’s leading homelessness advocacy group. “Right now, I have no idea what their timeline is, nor have they requested any documents from us.”

A seven-member delegation from Alpha Project visited Vancouver from Sept. 4 to Sept. 6. During the group’s three-day visit, Alpha Project staff spent more time talking about what they do in San Diego than asking about Share’s operations, McWithey said.

“There were very few questions about the day center itself,” she said.

She acknowledged that Alpha Project could have been given preparatory materials from the city. However, McWithey said the scope of what Alpha Project was hired to do grew considerably and she questioned how much they could accomplish in a short trip.

The eventual report could provide a frank assessment and call into question the area’s long-standing approach to homelessness.

Vancouver is already changing the way it approaches homelessness.

City leaders hired St. Louis to fill the new homeless resource manager position about six weeks ago. The proposed Joint Executive Board on Homelessness, which is intended to strengthen coordination between the city and county to streamline the region’s homelessness response services, remains in the air.

The city council is also considering A Stronger Vancouver, a new package of taxes and services that would allocate money to combating homelessness.

These plans have become at least partially dependent on the outcome of the Alpha Project study, which was commissioned by informal consensus at a council work session.

Council Chair Eileen Quiring said in a text that the council is also holding back on approving the reorganization because it is waiting on the report commissioned by the Lynch Fund. Quiring did not respond to a follow-up about what the report would cover.

Clark County Councilor Temple Lentz, whose district includes west Vancouver, said the assessment will be useful for the county because it’s the primary funder for many social services. She also said that while both the county and the city have held off on approving the joint council, both governments should make sure the eventual agreement is as strong as possible.

City leaders have also stated in public forums that they’re reluctant to move forward with any material changes to the city’s response to homelessness before seeing the report.

“There just was a feeling that, it would be premature of us to commit,” said Councilor Erik Paulsen in an interview with The Columbian.

In the interview, Paulsen said it would be a “fair assessment” to say the city is swerving on its homelessness strategy.

“And I think it’s purposeful and deliberate,” he added. “This is a window of opportunity for us to make some changes, and that could be the difference between having a homeless issue, and letting it turn into a homeless crisis.”

The need for an outside review of the Navigation Center was raised during a contentious city council workshop in July. Vancouver Police Chief James McElvain, Community and Economic Development Director Chad Eiken and Share Deputy Director Amy Reynolds had presented a six-month review of its operations. But councilors said their report failed to address any real issues surrounding staff and security.

During the workshop, Paulsen suggested the council could seek money for a third-party review of the center from the Ed and Dollie Lynch Fund. The other councilors unanimously agreed. At the next meeting, councilors learned that city staff had used the Lynch Fund to contract with Alpha Project.

In a conversation with The Columbian last week, Paulsen said he’d previously had conversations with representatives from the Ed and Dollie Lynch Fund about the need for a review, but Alpha Project hadn’t been selected when he raised the idea before council.

Michael Lynch, who is the son of the late Ed and Dollie Lynch and adviser to his parents’ charitable fund, declined to talk on record with The Columbian. The fund is held at the Community Foundation for Southwest Washington; as of Thursday, the foundation had not received a contract from Alpha Project.

“In the weeks leading up to that review, I had reached out to some of the folks I had developed relationships with,” Paulsen said. “(It was) in one of those conversations that I became aware that Michael Lynch was willing to make an investment to help us do a deeper dive.”

Representatives from the Lynch fund and the city met and selected Alpha Project to conduct the assessment. A delegation from Vancouver had previously toured Alpha Project’s tent shelters in San Diego, so they were familiar with the nonprofit’s work.

What is Alpha Project?

Alpha Project has garnered attention from across the country, particularly for its 324-bed bridge shelter, a reinforced tent that was erected in response to a hepatitis A outbreak among San Diego’s homeless population. It has been visited by people from dozens of cities and a handful of countries, even U.S. Secretary of Housing and Urban Development Ben Carson.

Bob McElroy, president of Alpha Project, visited Vancouver prior to his visit earlier this month. Last year, he walked around various shelters and homeless sites with Michael Lynch.

The straight-talking McElroy said he’s less interested in what paper-pushers have to say. He’s more concerned with the relationships in Vancouver and getting feedback from people who are recipients of homeless services.

He said he was tasked with providing an assessment of how Vancouver is doing.

“They’re desperate to make that right and I get it,” he said.

He said his report, which he acknowledged is “going to piss people off,” will make some suggestions that Vancouver can accept or reject. He plans to submit the report in the next week or so. Vancouver is so close to offering people comprehensive services that start them on the track to recovery, McElroy said.

The city is “decades ahead” of Seattle and Portland, he said, describing the two cities as more reactive than proactive. Alpha Project is not about enabling people, he said, but giving them the option of getting help or dealing with the consequences on the street of not getting help.

It’s important for people to get out of their cubicles and talk to people at the Navigation Center, McElroy said.

“We have a different culture at Alpha,” McElroy said. Most employees, McElroy included, have “felt the pain of being disenfranchised,” whether they were formerly homeless, drug addicts, convicts or gang members.

He emphasized the importance of shelters, saying people need a place to go and social workers need a reliable place they can find people to offer them help.

A “housing first” model is the philosophy that people can go straight from the street to permanent housing without any kind of temporary shelter. It’s a model preferred by the National Alliance to End Homelessness, and locally preferred by Budd, as proponents believe it’s easier to combat the health, employment and addiction issues that can accompany homelessness if you put a roof over people’s heads first.

McElroy said he believes housing first is a piece of the puzzle, but that it doesn’t work for everyone. He said housing takes years to build.

As Vancouver develops its response to homelessness, it may move away from the housing first model and toward more temporary shelters based on advice from Alpha Project.

Paulsen said that he would want to see Vancouver survey a full range of options as the city further develops its homeless strategy and starts directing its Stronger Vancouver dollars into specific programs.

“We certainly wouldn’t want to add to a system that’s not operating well,” Paulsen said.

“Housing first, I think, is a really good conceptual framework for how to help people without a home,” he said. “(But) we’re making homeless people faster than we’re building housing. Maintaining a housing-first mentality means accepting a certain number of people living on the street while they wait for housing.”