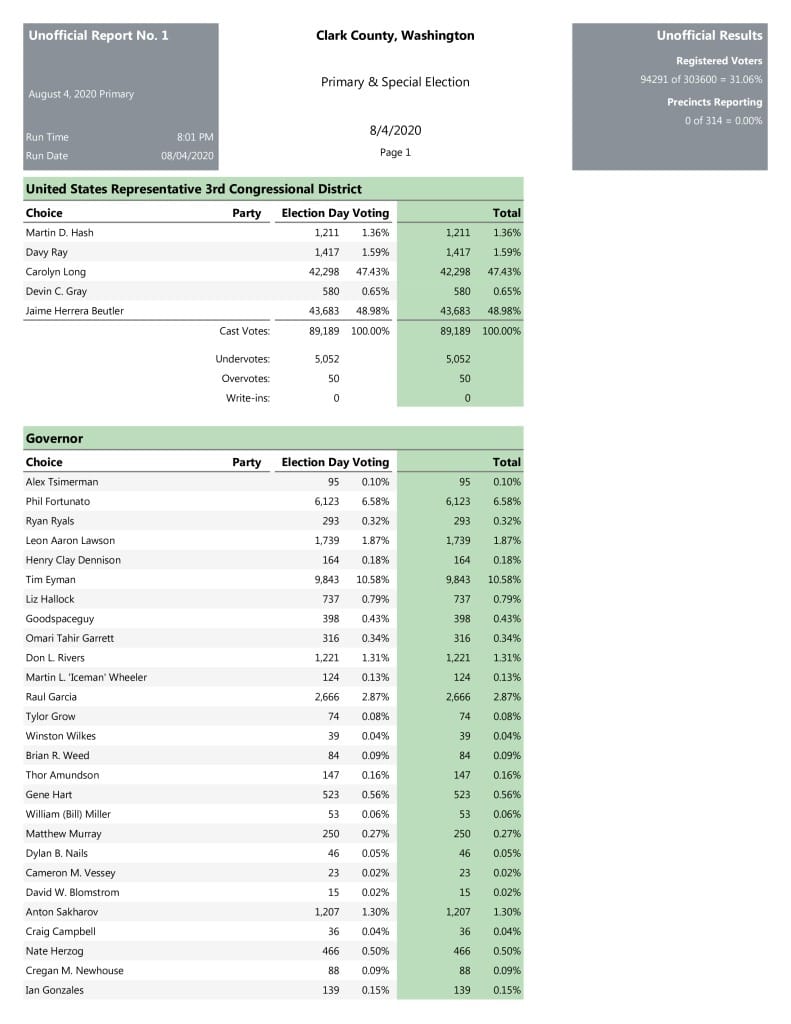 It was a good evening for most incumbents as first results from the primary election were released late Tuesday. Voters narrowed several races, showed their early preferences in races where both candidates advanced, and decided some fire district and school measures. Republicans, in particular, also chose dozens of precinct committee officers, to represent them in the divided Clark County party.

The top local race brought possibly the least drama as voters set up a widely expected rematch in the 3rd Congressional District race between incumbent Jaime Herrera Beutler, R-Battle Ground, and Democrat Carolyn Long, a faculty member at Washington State University Vancouver. Both easily outpaced three lesser-known opponents. In the district, which includes all or part of eight Southwest Washington counties, Herrera Beutler was polling 54.5 percent to 41.3 percent for Long. Long had only 47.4 percent in Clark County, which she narrowly won two years ago.

One of the most interesting races was taking place in east-central Vancouver, home to County Council District 3, where the power of incumbency was pitted against the power of political parties. In a three-way race, incumbent John Blom faced Republican Karen Bowerman and Democrat Jesse James, neither of whom has held local elective office.

According to first returns, voters are favoring the partisans, with Blom trailing. Bowerman had 43 percent, James had 34 percent and Blom had about 23 percent.

Blom had won his seat in 2016 as a Republican, but later split with the party, saying that local government offices should be nonpartisan. Bowerman, wife of the GOP county chairman, has sharply criticized Blom and said the county wastes money on “feel-good programs,” which she has repeatedly declined to identify. James, who describes himself as a liberal and a fan of U.S. Sen. Bernie Sanders, says he thinks county government spends its money responsibly.

In the 17th Legislative District, incumbent Republican Rep. Vicki Kraft captured a majority of the vote in a rematch against Democrat Tanisha Harris. Kraft has been vocal among a group of conservatives who have opposed the wearing of masks and closures of businesses in response to the coronavirus pandemic. The race will be decided in November.

Other returns from Tuesday night showed:

49th Legislative District: For Position 1, incumbent Democrat Sharon Wylie captured almost 59 percent of the votes in a race with independent Kelli Fiskum and perennial candidate Justin Forsman, who ran as a Republican. Forsman will get the rematch in November. In Position 2, incumbent Democrat Monica Stonier, who polled 61.71 percent, and Republican Park Llafet will advance to the general election. In the Senate race, incumbent Democrat Annette Cleveland topped police officer Rey Reynolds, 59.62 percent-40.38 percent. Both candidates advance to November.

Ridgefield school bond: A $40.465 million school bond appeared to be failing, with only 47.48 percent approval. This is the second time voters have turned down a bond to build new schools in the rapidly growing community.

As of Tuesday night, county elections staff had tabulated 94,291 votes. More results should be released Wednesday afternoon. That’s about a 31 percent turnout. Look for individual stories on the top races to be posted later this evening on www.columbian.com and in Wednesday’s print edition of The Columbian.

State races: Gov. Jay Inslee appears to be headed to a November showdown with small-town cop Loren Culp, the police chief of Republic. In the race for lieutenant governor, where there is no incumbent, Vancouver native Denny Heck, a former Democratic congressman from the Olympia area, led a crowded field.