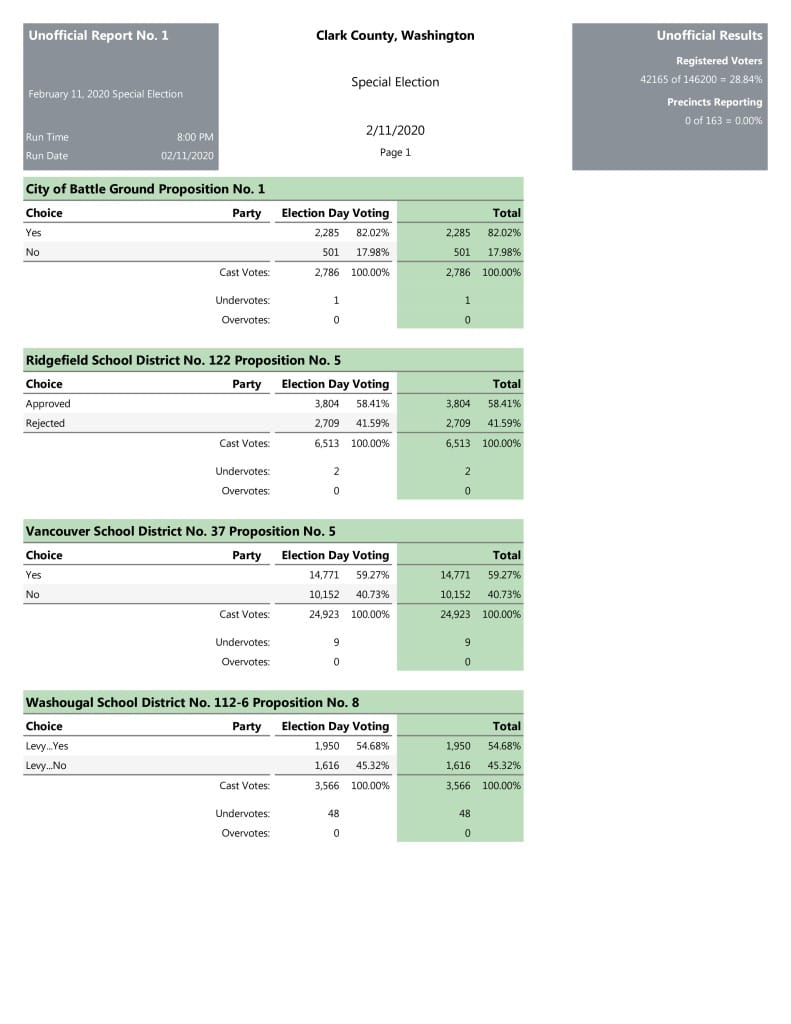 A proposal to annex the city of Battle Ground to Clark County Fire District 3 was leading by an overwhelming amount in Tuesday’s special election.

School levies were passing in Vancouver Public Schools and in the Washougal School District, but a levy was failing in Woodland. A bond measure in the Ridgefield School District was falling short of a required supermajority.

The proposed annexation was winning with 82.02 percent of the vote in Battle Ground and 74.89 percent of the vote in Fire District 3. Annexation will require Battle Ground residents to pay the same levy rate as district residents: $1.30 per $1,000 of assessed value, which would cost the owner of a $300,000 home an additional $390 per year. To offset part of the cost, the city plans to decrease its utility tax for water, sewer and storm water drainage by 46 percent. The city hopes to use property tax revenue freed up by annexation to bolster police services and complete maintenance and preservation projects for streets, sidewalks and parks.

The Vancouver, Washougal and Woodland school districts are all running operation levies, and Washougal is also asking for a technology levy to pay for student devices and other computers. And while district officials, particularly in Vancouver, acknowledge the taxation whiplash voters have experienced in recent years, they say the revenue is needed to backfill programs underfunded by the state.

The Vancouver levy was passing with 59.27 percent of the vote. The three-year supplemental levy to collect about $10 million in 2021, $10.4 million in 2022 and $10.9 million in 2023 to would cover teacher positions to maintain smaller class sizes, and hire nurses, counselors and other staff not funded by the state.

The Ridgefield bond was trailing with 58.41 percent of the vote. The bond, which needs a 60-percent supermajority to pass, would raise $107 million for school facilities. District officials say this bond is critical as they work to accommodate the additional 1,760 students expected to enter the district by 2023-2024.