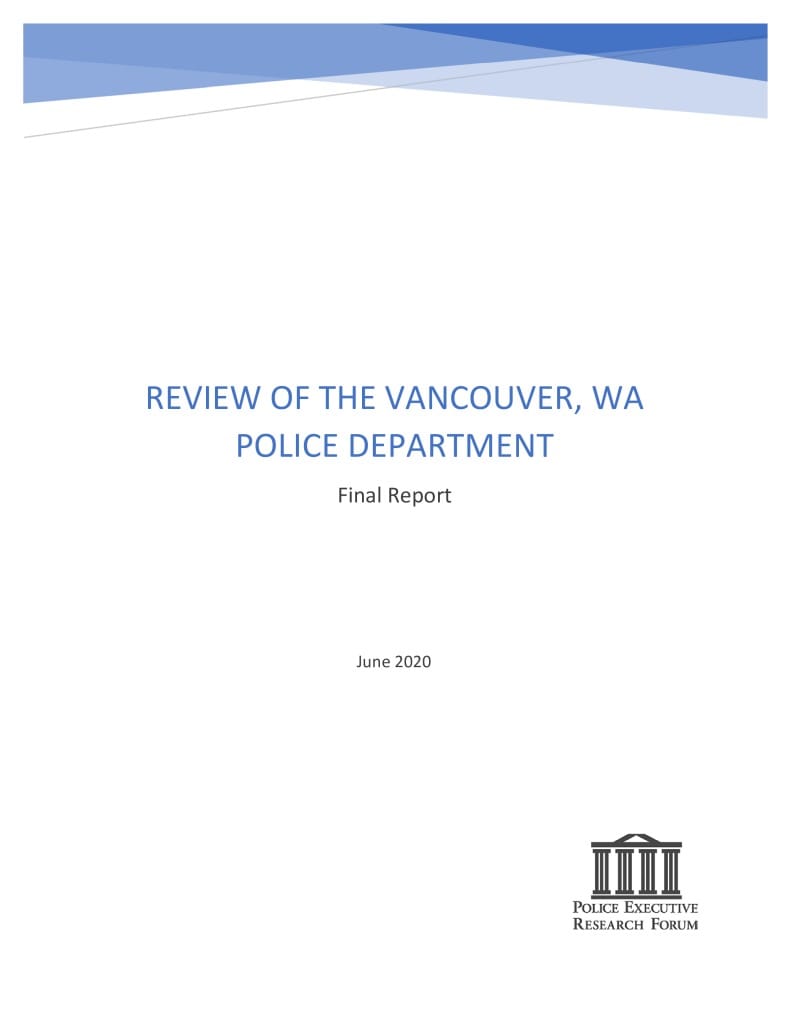 A consultant’s review of the Vancouver Police Department’s use-of-force policies has identified dozens of recommendations to reshape the department’s culture, including 10 changes that should be implemented immediately.

The Police Executive Research Forum — a nonprofit, national law enforcement membership organization — entered into a contract Aug. 1 with the city to conduct the review.

The city ordered the independent assessment following four Vancouver police shootings, three of which were fatal, last year. The study found that those shootings occurred during a three-year period in which the number of use-of-force incidents by Vancouver police increased by 65 percent.

Community tensions ran high following the shootings, which occurred between Feb. 5, 2019, and March 7, 2019. Two of the fatalities involved people of color and the third involved a homeless man previously diagnosed with schizophrenia. The shootings prompted rallies and gatherings demanding changes and an online petition calling for police body-worn cameras.

“The PERF report includes a comprehensive set of 84 recommendations that will serve as a roadmap to reform the (police department’s) culture, policies and practices around use of force,” the department said.

The recommendations identified for immediate action in the 91-page report include the following:

• Prohibition of any type of neck restraint, or shooting at or from a moving vehicle.

• Restricting the use of police K-9s to “serious criminal offenses.”

• Ensuring police sergeants respond immediately to difficult situations, such as calls involving people with mental illnesses, “in which a use of force might be necessary or when a well-managed response might result in compliance without use of force.”

• Training and requirements that lieutenants who conduct reviews of critical incidents consider the event in its entirety, which should include looking for ways to improve communications, tactics, policy, training and use of equipment.

• Ensuring use-of-force reports are reviewed by each level of the police department’s command, up to the assistant chief.

The final, immediate recommendation is meeting with the community to discuss the changes. Officials here and nationwide have been on the receiving end of an unprecedented call for policing reform, Vancouver City Manager Eric Holmes said.

“We have listened to the concerns from our residents, recognize the need for change and are committed to serving the public safety needs of all of our communities in a more just and equitable manner,” Holmes said in a statement.

“We want to improve equity, accountability and transparency, promote higher standards, and increase public trust and confidence,” he added.

Tolbert said police should take action as soon as possible on the immediate recommendations to improve for the community.

Southwest Washington League of United Latin American Citizens President Ed Hamilton Rosales said the organization’s council is reading the review and plans to discuss the particulars in a conference call this weekend. Rosales said he and the council want to better understand the numerous recommendations.

“We’re looking forward to help put the recommendations in place, and hopefully there will be a more effective plan for doing so moving forward,” Rosales said.

Between 2017 and 2019, the Vancouver Police Department’s number of use-of-force incidents increased by 65 percent, according to PERF’s findings. The report states that there doesn’t appear to be any policy or reporting changes that explain the increase. During the same time frame, the department had nine officer-involved shootings.

“PERF found that a relatively small number of officers were involved in a disproportionate number of force incidents,” the report reads.

In reviewing officers’ reports, PERF found that nearly half of subjects involved in use-of-force incidents were perceived to be under the influence of intoxicants. Nearly one-third of subjects had at least one “mental health indicator,” according to officers, but they didn’t consistently identify specific indicators.

Of the total subjects in the force incidents, 38.2 percent suffered injuries, PERF found. It recommended that the department start including more detailed data about the injuries.

The department has already started to improve its use-of-force reporting by adopting new protocols for data collection, according to PERF.

The police department said it will convene a community task force to help implement the recommendations laid out in the review. The group will help ensure transparency and accountability as the work continues, police said. It will also advise on establishing a body-worn camera program for the department, in time for the Vancouver City Council to consider it as part of the 2021-2022 biennial budget this fall.

The task force’s members will include representatives from the city council, the city manager’s office, the police department’s Diversity Advisory Team and “communities affected by police,” among others. The city reportedly has started reaching out to people to join the task force.

Vancouver Police Chief James McElvain said he wants to ensure the recommendations are put in place, which involves bringing new voices and perspectives to the table.

“We are embarking on a new era of American policing, one that is more responsive to what all communities expect from their police department,” he said in a statement.

Tags
Vancouver City CouncilVancouver Police Department
Receive latest stories and local news in your email:
By signing up you are agreeing to our Privacy Policy and Terms of Service.