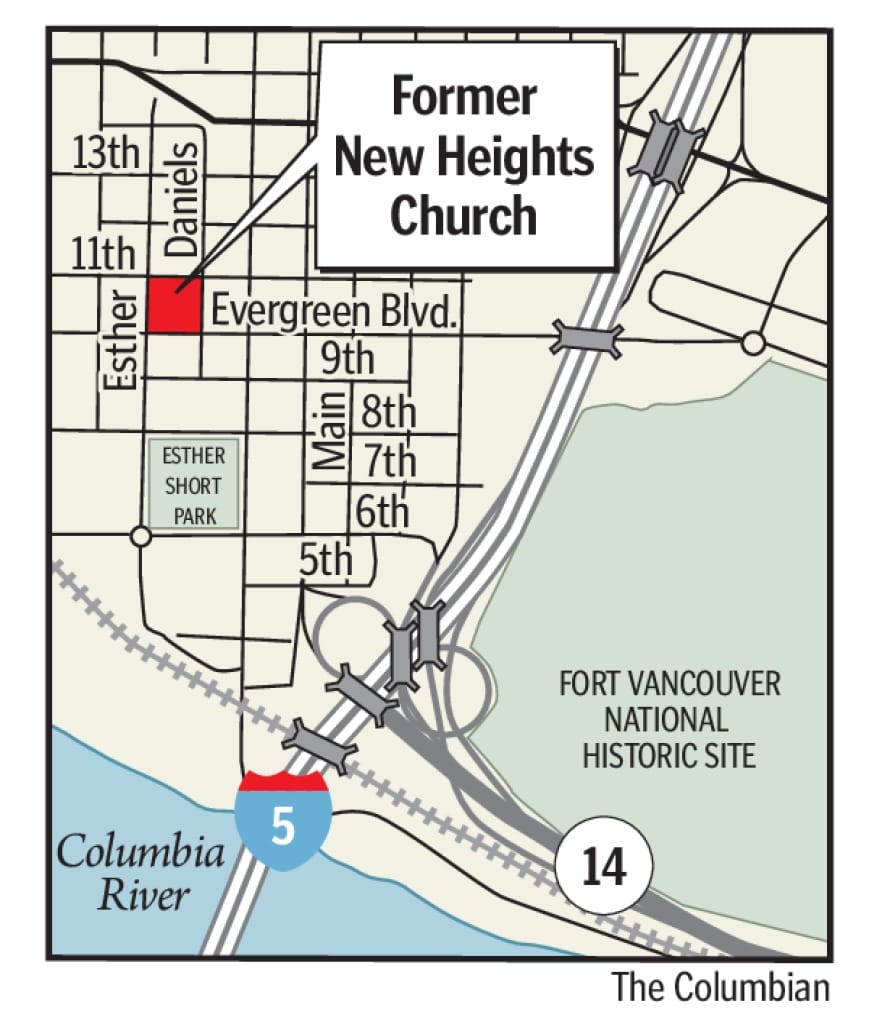 Demolition has begun on a 108-year-old downtown Vancouver church whose loose brick facade had become a hazard to passersby. The fate of the soon-to-be-leveled block is uncertain.

The former west annex of New Heights Church and the block it sits on was purchased earlier this year for $3.2 million by the estate of Ed and Dollie Lynch. The late couple were known for their philanthropy, which continues through a fund held at the Community Foundation for Southwest Washington.

Their son, Michael Lynch, said it would’ve taken millions to fix two aging buildings on the property bordered by Daniels, Esther and West 11th streets and West Evergreen Boulevard. The newer, secondary building was torn down earlier this month. The church was declared unsafe for occupation. Once its roof is removed, the building will collapse in on itself because the brick is not reinforced.

“They’re going for the least possible impact on landfills. That’s part of their whole goal is to reuse anything and everything they can,” he said.

First Presbyterian Church on Main Street will use old stained-glass windows for a display. The bricks — some of which had already fallen from the building — will be crushed and turned into asphalt. Lynch said a time capsule was buried underneath the foundation in 1908. He hopes the demolition crew can recover it intact, but after 112 years it could be broken.

Edgerly noted that countless people over the decades have sat in these pews, which are hand carved at each end.

“We want to be certain the products can be utilized in a way that’s meaningful for others,” he said.

In the meantime, the pews are being stored at WareHouse ’23, a riverside restaurant and event space that will permanently close at the end of the year.

First Presbyterian Church built the large brick church at 415 W. 11th St. in 1912 after another church on the site had burned to the ground, according to the Clark County Historical Museum. Overfiring the building’s bricks gave them a polychromatic finish.

The church was later owned by the city of Vancouver and used as a performance space called the Columbia Arts Center. The city sold the building in 2000 to entrepreneur Martin Hash, who sold it to New Heights in 2007. New Heights bought the block’s remaining parcels in 2015 from Children’s Center, which had outgrown the space and built a new facility in east Vancouver.

Demolishing the aging buildings on the block creates a blank slate, potentially for a nonprofit or some other purpose. While Lynch said he isn’t any closer to determining the future of the site, he said nonprofits had previously expressed interest in expanding to Vancouver. Due to the COVID-19 pandemic and economic downturn, they may be hesitant right now to make the move.