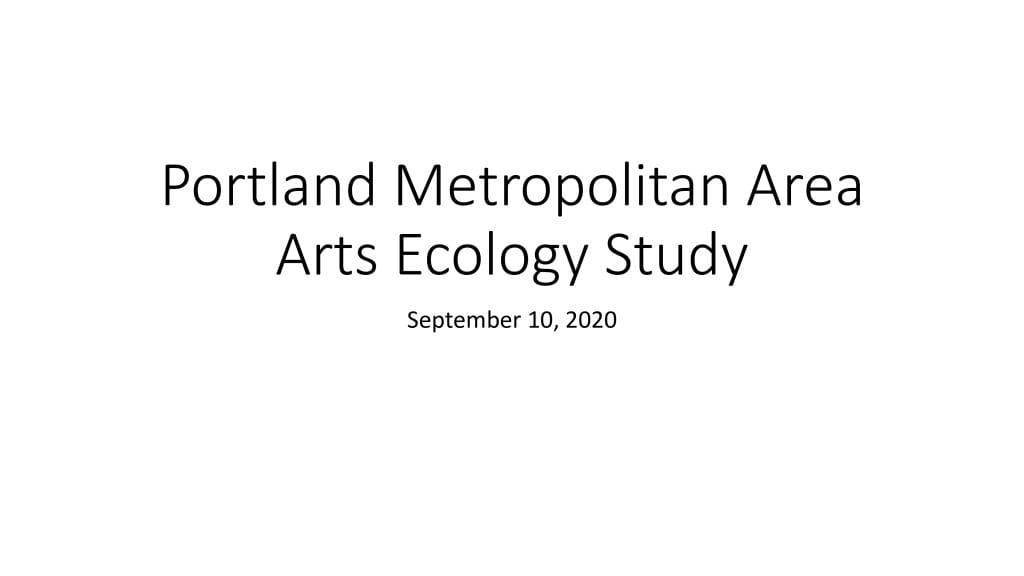 There’s never been a shake-up of the arts, all across America, like this year’s double-whammy of a global pandemic and a nationwide protest movement against institutional racism.

A new report on the Portland-Vancouver arts scene says this dramatic disruption — with arts organizations starving for ticket sales, cutting their already-meager payrolls and soul-searching about their commitments to social justice — is both a major challenge and a major opportunity.

Arts organizations should use this time to bolster their outreach for political and financial support, develop partnerships or merge with peer groups and get creative about affordable space, the report says. Crucially, they must also recommit to diversity, equity and addressing in-house race and bias issues.

“The jury is still out” about progress on that front, said report author Michael Kaiser, chairman of the DeVos Institute of Arts Management at the University of Maryland and a recognized turnaround expert for struggling arts organizations. Many have declared good intentions, but “measurable actions” to overcome bias and racism will take longer to assess, he said.

“The arts are a vehicle to bring people together,” said Steve Moore, the trust’s executive director. “The most challenging issues and the most inspirational pathways to solutions come to us through the arts.”

The report, which focuses on the entire Portland metro area, underlines what artists and arts fans already know too well: Portland real-estate prices are driving artists to the suburbs, and patrons don’t like fighting traffic back into Portland to attend events.

That should be a boon to Vancouver, but downtown space here is nearly as unaffordable as in Portland for most artists and arts organizations. The report recommends thinking in newly creative ways as groups hunt for space, like merging or seeking partnerships with public schools. (Some local performance groups have tried schools, they’ve told The Columbian, and found them surprisingly unaffordable and impractical.)

Philanthropic support for the arts tends to come from the same familiar corporate sponsors and aging donors, the report notes. There’s no better example than Vancouver’s Paul Christensen, a real estate magnate and the major individual supporter of the Vancouver Symphony Orchestra. Christensen recently gave the orchestra a COVID relief gift of $50,000. His deep pockets remain behind the long-standing, unrealized dream of a concert hall and multifaceted arts facility, the Southwest Washington Center for the Arts, on the waterfront here.

Another wealthy donor has already underwritten such a building in Beaverton, Ore., where ground broke last fall on the Patricia Reser Center for the Arts. It’s almost certainly too late now for an arts center on Vancouver’s own developing waterfront, according to Karen Madsen, chairwoman of Artstra, a Clark County arts advocacy group. Madsen said some arts groups are starting to shift their hopes to central Vancouver’s disused Tower Mall site, which is ripe for redevelopment.

Lots more support from local philanthropists, corporations and average folks is available in Southwest Washington, the report says, if arts groups only learn how to make an effective case for it.

“Donors didn’t stop giving because of the pandemic,” Kaiser said. “The money is hiding, in amounts both big and small.” What needs to happen is smart marketing at every level, he said, from special events to simple reminders that Clark County arts institutions still exist and are eager to enrich people’s lives.

“So many great things are happening in this area,” Moore said. “Clark County is ready. There just needs to be a concerted effort.”

There hasn’t been an elected champion of the arts in Southwest Washington since the late state Rep. Val Ogden, a Vancouver Democrat who spent six terms in the Legislature, Moore said. An elected arts champion won’t see the arts as a mere “add-on,” Moore said, but as integral to quality of life and to a booming economy.

Oregon ranks 26th in the nation in state spending on arts agencies, but Washington is far behind that, ranking 41st, the report notes.

“There just has to be more state buy-in and recognition that arts organizations are not just for entertainment, they’re economic engines,” Moore said. “They impact restaurants, employment, parking — all these surrounding economic impacts as well.”

When the pandemic struck, organizations that depend on earned income like ticket sales and concessions were in immediate trouble, Kaiser said. Organizations that have diverse funding streams have fared better.

“How the pandemic impacted the organization depends on where its revenue came from,” he said. “Donors didn’t stop giving.”

The pandemic has provided a major opportunity to move arts programming online, Kaiser said. Unfortunately, online programming is rarely much of a moneymaker.

“Most online programming has no revenue attached to it,” he said. “It’s been an opportunity to start thinking about how to use digital platforms but it hasn’t been a replacement for revenue.”

The rare exception is the Vancouver Symphony Orchestra, which recently streamed a live concert from Skyview High School featuring distanced, masked musicians and no audience in the seats. Reviews were excellent and the symphony was celebrated for safely taking an innovative, inspiring step forward. The price of admission — to watch at home — was fairly standard for a live classical concert: $30.

“The challenge is to do what the Vancouver Symphony is doing,” Kaiser said. “Innovative programming will attract a broader base of patrons and a broader base of donors. If Vancouver arts groups can do that, they’ll be successful and they’ll distinguish themselves from the work that’s happening across the river.”

Tags
Charities & NonprofitsClark CountyVancouver
Receive latest stories and local news in your email:
By signing up you are agreeing to our Privacy Policy and Terms of Service.