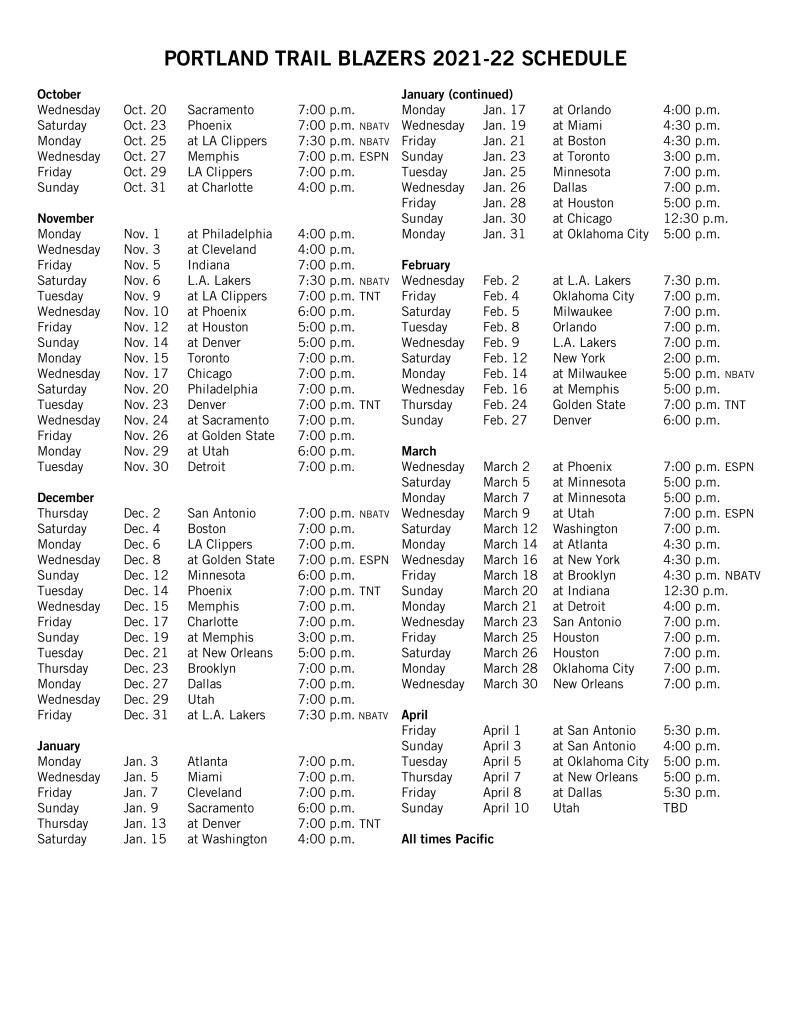 The full schedule for the NBA’s 75th anniversary season was released Friday, and the Portland Trail Blazers will start the 2021-22 season at Moda Center against Sacramento on Wednesday, Oct. 20.

The NBA season, which opens on Oct. 19, will be highlighted in part by what will be a yearlong tribute to some of the key moments in league history.

It’s back to a normal schedule for the NBA, with all teams playing 82 games after a 72-game slate last season because the calendar was compressed due to the coronavirus pandemic.

The NBA has prioritized player rest over the past several seasons, a trend that continues this year. Teams on average will travel about 43,000 miles, which would be a record low for a 30-team, 82-game season. Single-game road trips are down to about seven per team, a considerable drop from about 10 per team two seasons ago.

Portland’s opening week will continue at home against Phoenix on Oct. 23 before the team heads south for its first road game of the season at the L.A. Clippers on Oct. 25.

The Blazers will face each Eastern Conference opponent once at home and once on the road.

Among the top matchups at the Moda Center include:

Portland’s longest road trip of the season is a six-game, cross-country journey that starts in Denver on Jan. 13 with stops in Washington D.C. (Jan. 15), Orlando on Martin Luther King Jr. Day (Jan. 17), Miami (Jan. 19) and Boston (Jan. 21) before concluding at Toronto on Jan. 23.

The Raptors will play at their Toronto home after relocating to Tampa, Fla., last season because of Canadian border restrictions.

Four of the Trail Blazers first five games will be played at Moda Center, contributing to a home-heavy first half of the season, which features 25 of 41 contests in Portland.

The balance shifts in the second half of the season, despite two five-game stints at home from Feb. 4-12 and March 23-30 that mark the longest homestands of the season.

Portland will close out the regular season at home on Sunday, April 10 against Utah.

All 82 Trail Blazers games will be televised by ROOT Sports, or on national carriers. Portland is scheduled to have five games on TNT, four games on ESPN, and seven games on NBATV. All games will also be aired on flagship station Rip City Radio AM 620.

A breakdown of some of the season highlights: