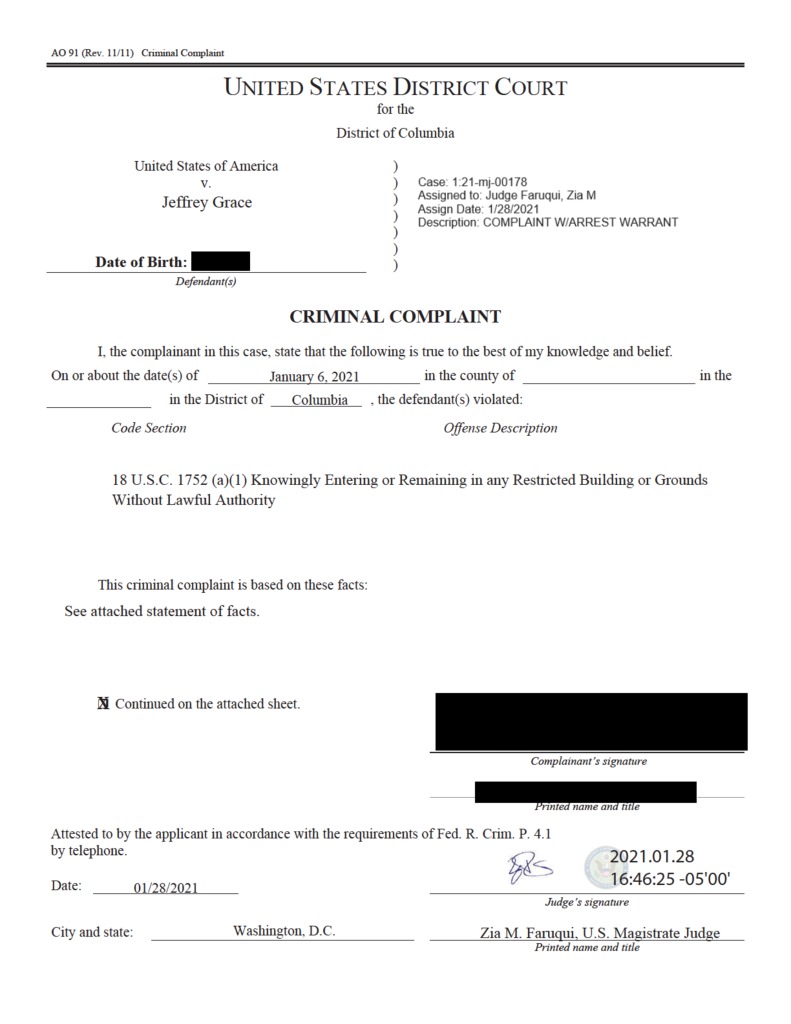 SEATTLE — A Southwest Washington man has been arrested and charged with entering the U.S. Capitol with a pro-Trump mob during the Jan. 6 deadly insurrection.

Jeffrey Grace of Battle Ground was arrested Thursday at his home and charged by complaint in Washington, D.C., with one count of unauthorized entering or remaining in any restricted building or grounds, according to charging documents.

Grace, 61, made an initial appearance in federal court in Portland on Thursday afternoon, The Seattle Times reported. He faces up to one year in prison, if convicted.

It was not clear Thursday whether Grace had a lawyer, and calls the newspaper made to phone numbers listed for Grace were not immediately returned.

According to an FBI affidavit, an informant called an FBI tip line on Jan. 19 after learning from a family member acquainted with Grace that he had been at the Capitol during the siege. Two days later, when FBI agents interviewed Grace outside of his home, he allegedly acknowledged traveling to Washington, D.C., with his son to sightsee and attend a rally in support of then-President Donald Trump on Jan. 6, the affidavit states.

Grace told the agents he got separated from his son after the rally, and walked with others to the Capitol and entered it through an open door, according to the affidavit. Once inside, Grace walked to the Rotunda, “picked up items that others had knocked over,” and “decided to leave after witnessing several people causing damage to Capitol property.”

Grace also allegedly took a metal pipe away from one man and “placed it behind a wooden object in the Rotunda,” the affidavit states. He later crawled out a broken window to leave the building, it states.

Grace allegedly identified himself to agents as the bald man in the background of “widely distributed photographs” of another man carrying House Speaker Nancy Pelosi’s lectern through the Rotunda. He told agents he wasn’t affiliated “with any group that advocated violence,” but he knew members of extremist groups, according to the affidavit.

Grace is the third resident of Washington state to be charged after thousands of pro-Trump supporters stormed the U.S. Capitol as Congress was meeting to certify Joe Biden’s presidential win.