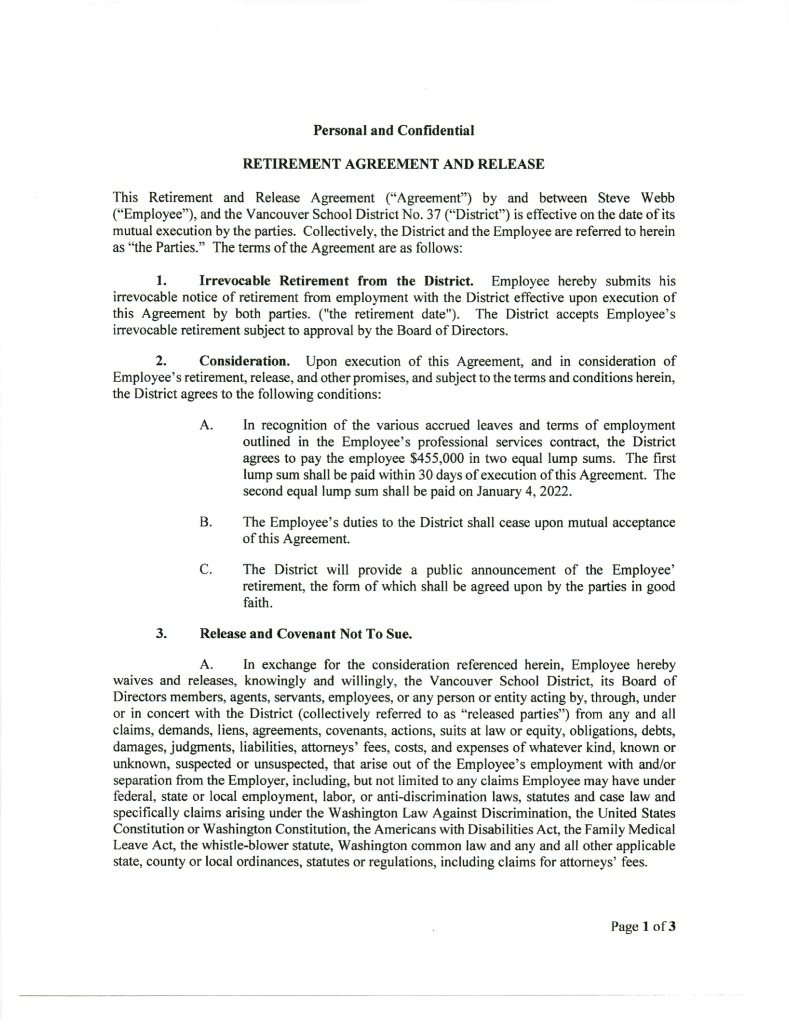 According to the “retirement agreement and release” obtained Friday by The Columbian through a public records request, the payment is split over two equal lump sums and represents various accrued leaves and terms of employment outlined in Webb’s professional services contract.

The first half is to be paid 30 days following the execution of the agreement, which was signed by both parties on Feb. 11. The second lump sum is set to be paid Jan. 4, 2022.

As part of the deal, the district and Webb agree to not disparage each other personally and professionally. They also agreed that neither side was admitting any liability in making the agreement.

Both parties also agreed to a public announcement of Webb’s retirement, which the district provided Feb. 11.

The settlement was negotiated by the district’s outside counsel and Webb’s counsel, according to the district.

Webb waives his right to sue or file grievances with the school district and agrees “not to communicate with or contact, directly or indirectly in any manner whatsoever, current or former employees of released parties for the purpose of encouraging, promoting, initiating or discussing any action whatsoever” against the district, according to the document.

Last week, the board placed Webb on administrative leave while the board engaged in ongoing negotiations regarding Webb’s contract, which was set to expire June 30, 2022. A search for his permanent replacement began late 2020.

Two days after placing Webb on administrative leave, the board and Webb agreed to part ways. Webb served as superintendent since 2008.

The district has not publicly disclosed the reason for Webb’s early retirement mid-school year. Board president Kyle Sproul has declined to comment about what led to Webb being placed on administrative leave.