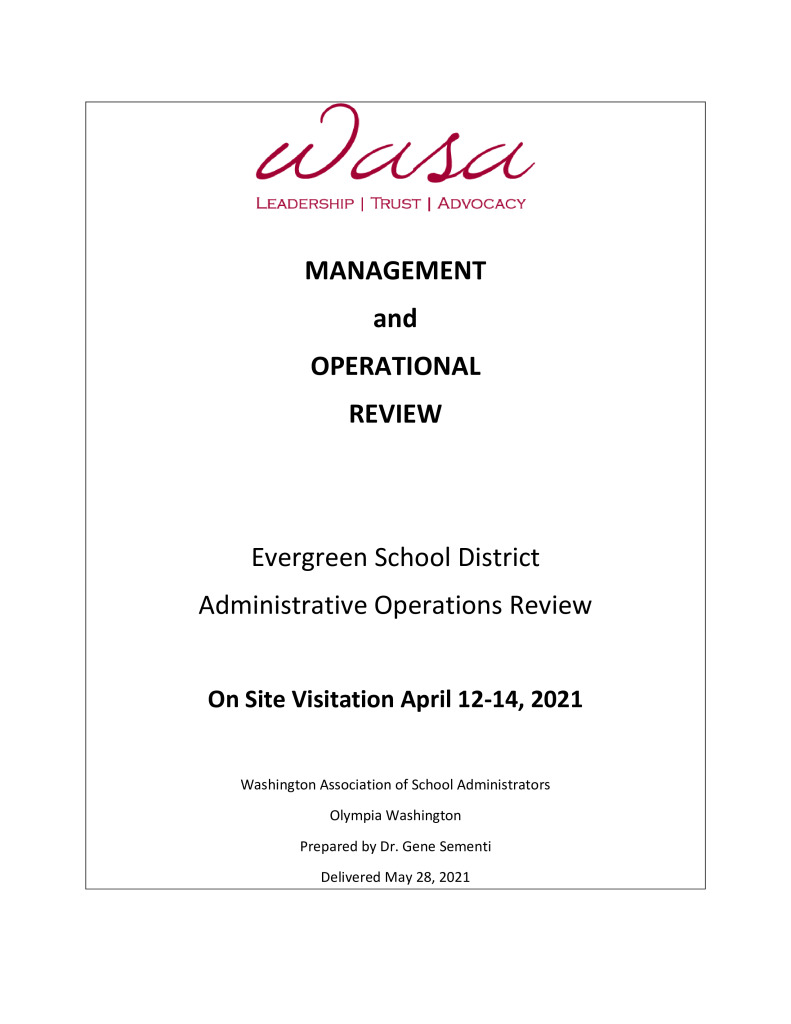 An independent review of Evergreen Public Schools’ senior-level leadership this spring described a lack of trust and a divide among staff, causing a “chilling effect on climate and culture” within the central office at Clark County’s largest school district.

The May 28 report was produced by a team at the Washington Association of School Administrators. The report was first obtained by The Columbian, then a subsequent copy was voluntarily handed over by the district.

The administrative operations and structure review was requested by the Evergreen school board, said Chair Victoria Bradford. No specific issue prompted the report, she said, but rather, discussions on how district leaders can best proceed together after a pandemic-riddled school year, particularly with new faces in district roles. Bradford said the findings weren’t a huge surprise, but also not a disappointment.

“It’s an opportunity for us to really move forward,” Bradford said Thursday, “and create the best system that we possibly can, but you need a very cohesive team to do that.

“We have all the people in place now, and it’s a matter of developing them to be working together for the best outcomes for our students and the community.”

A four-person outside team interviewed 27 district administrators between April 12 and 14 and examined district documents and other materials as part of its review. Multiple recommendations included in the review have already been implemented, according to the district, including job duty changes for Superintendent Mike Merlino.

District officials said this week that Merlino is away from the office and was unavailable for comment.

The 23-page report cited consistent themes emerging from staff interviews, including pride in the district’s responsiveness to COVID-19 developments and a student-centered focus of employees’ work.

However, the report also found trust issues were the main barrier facing the central district office. Interviews uncovered distrust among a “significant number” of senior leadership members, and in some cases, a “deepening and widening” division.

Several staffers also noted an absence of a clear vision and mission, and a lack of trust and systemic fear related to budget cuts and reorganization efforts as reasons why they didn’t feel part of a high-functioning leadership team.

“It is important to note that everyone had a small circle of trust,” the report stated, “but that trust began to break down the farther from the circle they got, particularly outside of their department.”

Furthermore, the report said, “this lack of systemic trust is having a chilling effect on climate and culture that is impeding the effectiveness of district office staff.”

The divide also reached top-level administration, according to the report. It noted a strained relationship between Merlino and Jenae Gomes, the district’s chief operations officer. Gomes oversees several chief, executive and senior directors.

“This relationship is critical to trust-building across the leadership team,” the report said.

The report made a host of recommendations to the district, and highlighted the chance for Evergreen to “wipe the slate clean and begin building teamwork and trust” once all departments finish relocating into the new district headquarters at 13413 N.E. Leroy Haagen Memorial Drive this summer.

As a result of the report, Merlino is now enrolled in the superintendent certification program through Washington State University. Merlino earned a bachelor’s degree in business administration from WSU, but holds no other degrees, certifications or credentials.

District spokeswoman Gail Spolar said Merlino will work with Jacobson as part of a yearlong CFO transition process starting Sept. 1 and will keep his CFO salary next school year while the transition is ongoing. Once the transition is complete in 2022, Merlino’s salary will drop to $259,940, which is his current pay for serving as superintendent.

Merlino has worked in public education since 1988 and been with Evergreen since 2000, first as its director of budget and operations, then chief financial officer and, before becoming superintendent, chief operating officer.

District officials said they will implement other recommendations from the outside report, including:

A June 10 email from Merlino and Bradford to district staff who received the report acknowledged the review’s findings and said leadership will “continue to utilize the report for planning and to continue in a positive direction in the future.” The email said the review was conducted to “provide recommendations on administrative operations, communication processes and protocols, and areas for growth.”

Tags
Evergreen Public Schools
Receive latest stories and local news in your email:
By signing up you are agreeing to our Privacy Policy and Terms of Service.