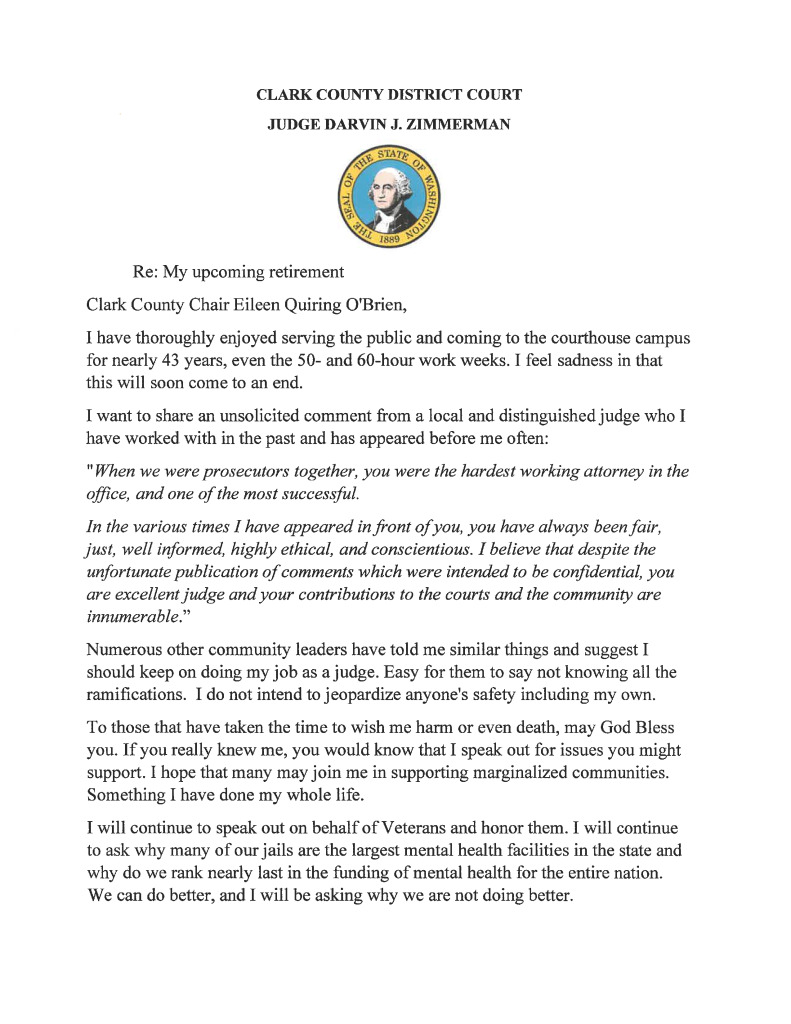 Clark County District Court Judge Darvin Zimmerman, caught on courtroom cameras disparaging a local Black man killed by sheriff’s deputies, has told county officials he will retire at a time to be determined.

Zimmerman, 70, announced his intention in a May 26 letter to Clark County Council Chair Eileen Quiring O’Brien, saying he did so “to give the county the courtesy of knowing there will be two District Court Judge positions to replace.” (Judge John P. Hagensen is retiring June 30.)

The letter included a complimentary quote Zimmerman said he received from an unidentified “local and distinguished” judge and said “numerous other community leaders” had been similarly complimentary and had suggested he should remain on the bench.

“Easy for them to say not knowing all the ramifications,” Zimmerman’s letter reads. “I do not intend to jeopardize anyone’s safety including my own.”

The letter suggested that Zimmerman had heard from people who wished him “harm or even death” after the video surfaced, but it did not offer details. Attorney Josephine Townsend, who’s representing Zimmerman, confirmed in an email Wednesday he has received threats, but she did not say whether they had been reported to law enforcement.

The Washington State Commission on Judicial Conduct met in April, but it was unknown if Zimmerman was among the topics of discussion. Investigations and initial proceedings are confidential, but Townsend told The Columbian that they had received a case number.

Zimmerman announced March 16 he was temporarily stepping away after self-reporting to the commission comments he made about Kevin Peterson Jr., who was fatally shot by Clark County sheriff’s deputies on Oct. 29. The judge’s son is a deputy who was on the drug task force trying to arrest Peterson.

He made the comments in a casual conversation with a court commissioner that took place in an otherwise empty courtroom, but they were broadcast over social media because the cameras and microphones were still live after a previous court session.

His comments prompted condemnation from the District Court bench. Superior Court judges removed his authority to perform any functions of that court, and prosecutors said they would seek to remove him from all of their criminal cases. Several parties called for his resignation.

Zimmerman had previously indicated through his attorney he would let the commission’s investigation run its course before making a decision about retirement or resignation. He was first elected in 1986; his current four-year term expires at the end of 2022. According to the county website, monthly pay for District Court judges is $15,843, or $190,116 annually.

Reiko Callner, executive director of the Judicial Conduct Commission, said the state’s constitution does not permit her agency to disclose whether it’s received any complaints about Zimmerman, if he’s under investigation or if an investigation has been dismissed.

Speaking generally, Callner said in a phone interview Wednesday that the commission does not lose jurisdiction when a judge retires, but it may affect how the case is resolved.

Typically, a finding of judicial misconduct would require the judge to undergo remedial training to correct their performance. But if the judge retired or resigned, it would not be needed, Callner explained. If the misconduct is minor in nature and the judge has retired, the commission could decide not to pursue the case.

“It really depends on the totality of the circumstances of the case,” she said.

Any agreement, finding or charge in a case is made public, but pending or dismissed cases are kept confidential. The commission’s next meeting is June 25.

Peterson’s parents call Zimmerman’s remarks ‘slap in the face’
Kevin Peterson Jr.’s father condemned a Clark County judge Thursday for making disparaging remarks about his son but declined to say whether the judge should…

Zimmerman’s letter said that he has used his time off not to vacation but to work on “numerous community projects and scheduling some major medical procedures.”

“After consultation with the medical professionals, I will be giving an official date of retirement,” the letter said. Neither he nor his attorney elaborated on the medical concerns.

“Judge Zimmerman has a great love for his community. … He wants to continue to help his community address veteran issues and homelessness,” Townsend said in her email. “He accepts responsibility for his comments, and he looks forward to resolving the case with the commission. The commission has requested that he not give interviews or discuss the case in detail, and he is abiding by that request.”