PORTLAND — President Joe Biden opened a two-day visit to the Pacific Northwest by focusing on improvements planned for the runway and roof of the airport where he landed Thursday rather than any of the region’s traditional, natural attractions.

Portland International Airport lies on a tectonic plate fault line but is working on a series of modernizations, including a new, earthquake-resistant runway capable of accommodating jets coming and going even after a major natural disaster. The design is modeled after the runway of the Sendai airport in Japan, which Biden said he’d visited and which survived the 2011 earthquake and tsunami in that country.

The trip is Biden’s first as president to this part of the country and comes as he has increased travel across the U.S. to tout the $1 trillion, bipartisan infrastructure bill his administration backed and Congress approved last fall. Just since last week, Biden has been to Iowa, North Carolina and New Hampshire, and will travel to Seattle after the Oregon stop.

The president has been trying to promote the idea that he’s successfully advanced key policy goals — including providing badly needed funding for long-neglected public works projects around the country — despite Republicans in Congress opposing many of the White House’s priorities at every turn. The GOP counters that Biden has done little to tackle many of the nation’s most pressing issues, failing to control inflation that has climbed to its highest levels in more than 40 years or slow crime rates that are on the rise in some parts of the country.

“We’ve fallen behind. We haven’t invested in ourselves,” Biden said in a speech during which he noted that the public works package includes $25 billion to modernize airports across America. “It bothers the heck out of me that there’s this belief that we can’t do big things anymore. We can.”

Biden in the Northwest 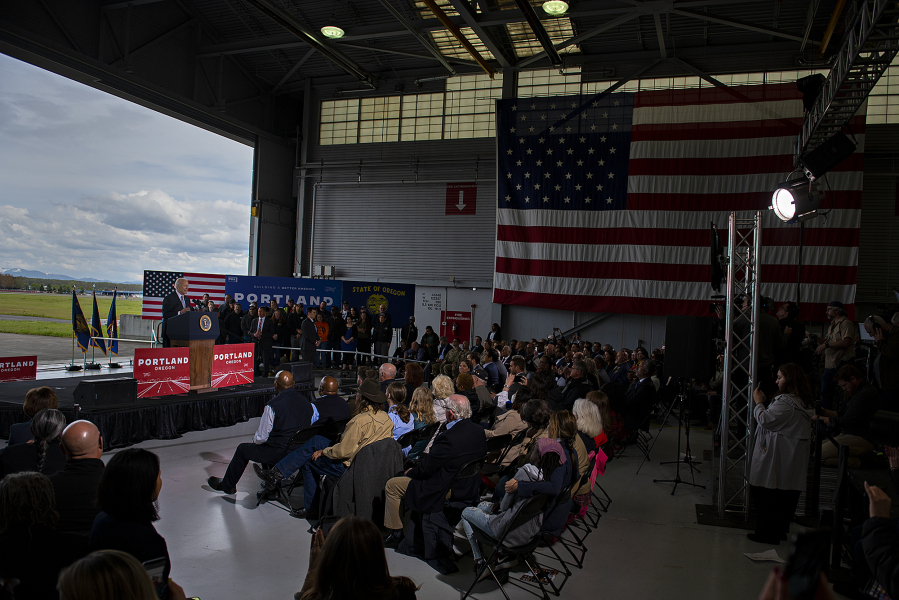 Biden touts local benefits of infrastructure plan during Portland stop
As reports swarmed the past week about President Joe Biden’s trip to Portland, residents in both Washington and Oregon were pondering what would… 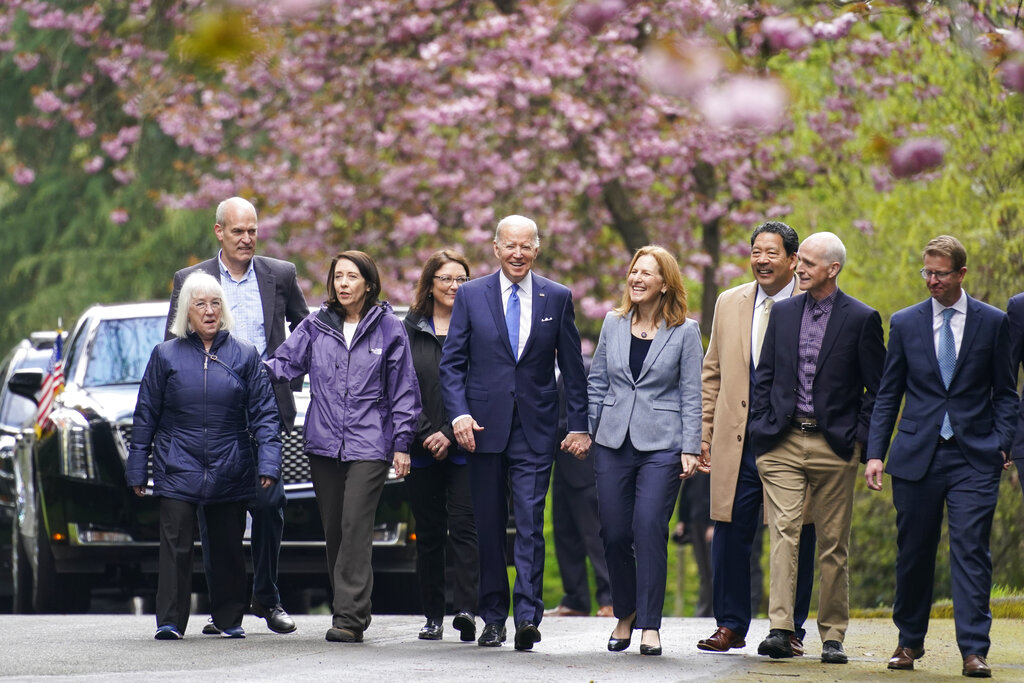 In Seattle, Biden signs order to protect old-growth forests from fire
President Joe Biden is taking steps to restore national forests that have been devastated by wildfires, drought and blight, using an Earth…

He added: “America invented modern aviation, but a lot of our airports are far behind our competitors.”

Portland’s airport is flanked by mountains and hills, yet, before his remarks, Biden was more attentive to the workers as they explained how the improvements would increase resiliency and energy efficiency. Officials are spending $2 billion on the airport revamp, including upgrades to the complex’s roof whose new sections will be primarily made of wood.

The roof is being disassembled into 20 sections and then pieced back together over the terminal, which Democratic Oregon Sen. Jeff Merkley called “an incredible investment in mass timber.”

The White House says about 19.8 million passengers traveled through Portland’s airport in 2019, and that air cargo has increased more than 19% since 2019 as online commerce has grown amid the coronavirus pandemic.

Among those on-hand was Oregon Democratic Rep. Peter DeFazio, who said, “I’ve been fighting my entire career for investments that will rebuild our nation’s crumbling infrastructure.” He said the U.S. continues to face systemic challenges, including “an economy that rewards wealth instead of work.”

Defazio and U.S. Rep. Earl Blumenauer spoke about traffic, transportation and infrastructure before the president took the podium. Blumenauer brought the Interstate 5 Bridge replacement project into the discussion on the day organizers announced light rail would be the mass transit option for the new bridge.

Biden planned to attend two Democratic Party fundraisers Thursday evening before visiting Seattle on Friday. There, he’ll mark Earth Day by speaking about a need to bolster the nation’s resilience in the face of threats like wildfire, and a need to rapidly deploy clean energy, the White House said.

Biden called the infrastructure law “a once-in-a-generation opportunity to build on these actions and accelerate our nation’s ability to confront the environmental and climate challenges we face.”

“For the future of our planet, for our health, and for our children and grandchildren, we must act now,” the president said in a statement.

Biden called the infrastructure law “a once-in-a-generation opportunity to build on these actions and accelerate our nation’s ability to confront the environmental and climate challenges we face.”

“For the future of our planet, for our health, and for our children and grandchildren, we must act now,” the president said in a statement.

Biden will mark Earth Day on Friday in Seattle, where he’ll be joined by Washington Gov. Jay Inslee, a fellow Democrat with a national reputation for climate action.