In December 2019, John Bial sat in a coffee shop in Portland’s South Waterfront trying to grasp what the representatives from Oregon Health & Science University sitting across from him were saying. He almost couldn’t believe it.

A few months prior, Bial had quit his job at Yecuris Corp. in Tigard, Ore., to get back to his true interest of entrepreneurship. Now he was hearing about a technology that could answer what he thought was the biggest unsolved issue in medicine: gene therapy using viruses as a vehicle to deliver treatment to targeted tissues. It’s bleeding-edge biotechnology with the potential to revolutionize the treatment of some diseases.

The representatives from OHSU’s technology transfer team captured Bial’s attention. All previous gene therapy using virus cells had proven less effective because viruses affect virtually all the body’s cells instead of just the ones that need treatment.

This new technology, developed by Dr. Hiroyuki Nakai at OHSU, could target specific types of tissue — a potentially massive breakthrough.

So in early 2020, months before the coronavirus pandemic threw the world into uncertainty but also elevated interest in biotech, Bial joined with Nakai and Charlie Kang to found Capsigen Inc., a Vancouver-based company focused on developing this new technology.

Engineers microorganisms called E. coli to produce proteins for pharmaceutical companies that use them to efficiently manufacture drugs, including insulin.

White-coated lab technicians were busy creating “libraries” of non-parthenogenic (harmless) viruses called AAV capsids. The viruses are being created as shells to hold genetic therapy tools. The company’s goal is to guide the evolution of the viruses so they will target a specific tissue to treat a specific disease, such as Alzheimer’s.

“Our growth has been kind of explosive,” said Bial, 45.

The company now has 12 employees, with the goal of doubling that number by the end of the year. The employees are highly skilled in the biotech field and come from much larger markets to Vancouver’s growing biotech scene.

“We need many more people,” Bial said. “We’re taking our time building it. This is the nice thing: making sure we get the best and brightest.”

While founders Bial, Kang and Nakai plan on keeping investors at bay until the privately held company’s products are ready to go to trial, they’re still making moves that are leading to its growth.

Last May, the company entered into a strategic research collaboration with Massachusetts-based Biogen, a force in the global biotech industry, to take some of Capsigen’s future drugs to trial and market.

“It was a public validation of the technology,” Bial said. “I think it says something about the approach and how special it is.”

Capsigen received $15 million up-front for the collaboration, with the potential of receiving up to $42 million more once the company hits certain research milestones and up to an additional $1.25 billion in development and commercial payments “should the collaboration programs achieve certain developmental milestones and sales thresholds,” the two companies said in a statement announcing the deal.

Capsigen is also eligible to receive royalties on future net sales of products that incorporate capsids resulting from the collaboration, the statement said.

While the field of gene therapy numbers over 150 companies, with seemingly a new player every week, Capsigen’s focus on engineering the viruses makes it one of six companies that Bial knows of doing so, he said.

Kang, who lives in Colorado, recalls the trio of founders traveling to Boston in early 2020 to talk about Capsigen’s technology to industry peers.

“It was the first time we three met in person,” Kang said. “We had meetings. Dr. Nakai would show some information. We met with very experienced people. You could see their eyes open up. They said, ‘How’d you do that?’ At that point, I knew there was something interesting.”

Bial, who’s worked with many companies in the biotech industry, met Kang about 20 years ago and Nakai about 10 years ago, when the two were working on research for growing human livers in mice.

Nakai was born in Kyoto, Japan, and became a hematology and oncology physician while attending school there. His path to gene therapy was unexpected, he said.

“I didn’t know anything about gene therapy, but I had a mentor who was so impressed by a talk about AAV gene therapy,” Nakai said. “He said, ‘Why not just jump into gene therapy?’ He was so excited. It inspired me a lot. I was excited about the technology.”

Nakai moved to the United States in 1996 to work in gene therapy for Avigen Inc. He eventually moved to OHSU because of its access to the Oregon National Primate Research Center and the chance to work with Dr. Markus Grompe, who since 2004 has been the director of the Oregon Stem Cell Center at OHSU.

Nakai’s work at OHSU reached a point where it was being patented and sold to companies, including Capsigen. It’s common for research institutions like OHSU to have a technology-transfer team that sells patents and partners with entrepreneurs to get products to market.

The team of owner-founders and Capsigen’s employees are what Bial calls his “dream team.”

Bial was born on Washington’s Kitsap Peninsula and was in high school when a thought struck him that would alter his course in life to study science, initially in chemistry.

“I wanted to know why things were the way they were,” Bial said. “There was no other area of science that could answer that question. I remember being maybe a freshman in high school wondering why you didn’t fall through floors, and why something was gray and something else was white — really basic questions. I think the fundamental linking science is chemistry, so if I learned chemistry and understood it, I should be able to answer all of those questions.”

He attended the University of Washington for his undergraduate degree, graduating in 1998. That year, he joined a startup in Eugene, Ore., called Molecular Probes Inc., where he said he saw the grit and improvisation needed to make a startup work.

“I got some of the entrepreneurial bug there,” he said. “We just had to make things work sometimes.”

Some winter mornings, he’d come into work and go into the chemical hood, and his water bath would be frozen over because the heating didn’t work.

“Somehow, it didn’t bother me,” he said, “because you’re kind of in it with everyone else.”

In 2003, the company was bought out by a giant biotech company called Invitrogen, part of Thermo Fisher Scientific Inc. Bial began work in the company’s mergers and acquisitions department, stitching together the small biotech startups around the world that Invitrogen bought. 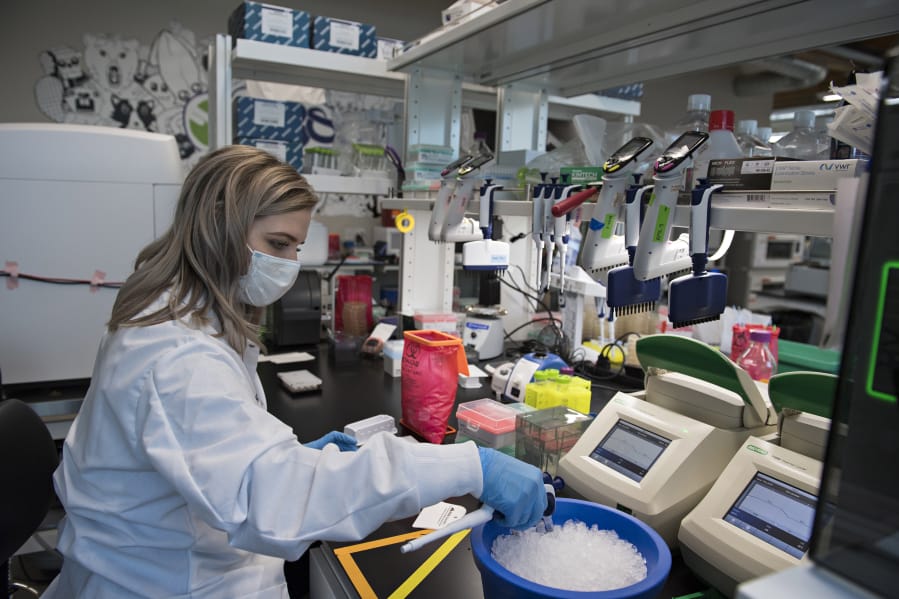 Clark County, Washington bullish on biotech industry
Vancouver’s medical biotech companies — Absci, CytoDyn and a new player, Capsigen — are on the leading edge of a global revolution aimed at developing…

“They’d made about 30 or 40 acquisitions,” Bial said. “There were scientists all around the world, and we were bringing them together.”

But the higher Bial rose in the corporation, the further he got from the science.

Bial quit Invitrogen to become CEO of a company he co-founded called Yecuris Corp., which used OHSU technology to grow liver cells in mice. During that time, Bial met Nakai.

Bial founded two other startups — Surface Tools and Hepafarm — but he said he soon realized that any successful startup reaches a point where things become all processes and it loses the luster of entrepreneurship, where the workers have to make things up as they go.

In 2019, he decided he was “interested more in clinical stuff” and quit his job to find his next project. He floundered for months until a colleague asked him one question: What’s the largest unsolved problem in biotech?

“I instantly knew what I needed to do,” he said. “Then the trial was how could I find it.”

A few months later, sitting in the coffee shop at Portland’s South Waterfront, he heard about Nakai’s work at OHSU.

“Serendipity,” he said. “I don’t have another way to describe it.”

Capsigen, a play on the word capsid, was incorporated in March 2020, but it took the founders a while to decide where to set up headquarters.

Vancouver stuck out for many reasons.

“Vancouver is a city that’s poised itself for growth,” Bial said. “It’s invested in helping business. We wanted it downtown so it was commutable for employees working in Portland. It gave us good proximity to OHSU.

“Looking at what was happening in Portland with the instability (there), the community was much more fractured,” he said.

With only a dozen employees but a high financial backing in an industry that seems to be on top of the world, Capsigen is aiming for a major role in medicine, Bial said.

The idea of its technology is simple: It uses harmless viruses that are engineered to carry a therapeutic gene to a cell that needs it to heal.

“It’s a one-time treatment,” Nakai said. That’s compared to current treatments for some diseases that require medication for the remainder of the patient’s life.

While some of the first-generation gene therapies (which don’t target certain cells but instead spread to all cells) have caused concerns in the medical field, Capsigen’s technology that targets specific cells has a much greater potential, Bial said.

“We have a platform which has incredibly broad applications and the ability to address real problems people are seeing today,” Kang said.

Other companies and researchers across the world are aiming to accomplish the same thing, said Dr. Miguel Sena-Esteves, associate professor at the University of Massachusetts Chan Medical School.

“It’s a hypercompetitive space,” he said. “Is it new? Not necessarily. Will it be successful? Absolutely. No question.”

Sena-Esteves said that he believes that eventually, many companies aiming to target specific tissues with AAV capsids will find success, but their medicines will be slightly different from one another.

Nakai’s reputation as a leader in the field gives legitimacy to Capsigen’s efforts, according to Sena-Esteves. He said Nakai could have something up his sleeve to give Capsigen a competitive advantage.

Part of Capsigen’s work is creating libraries of billions of AAV capsids and guiding their evolution to achieve their goal of delivering the therapeutic genes. Depending on the pace of research, the first of Capsigen’s gene therapy drugs could make it to trials in three to five years.

“This is the future of medicine,” Bial said. “This will completely transform the way we treat patients. It will treat untreatable diseases today. Can you imagine a diabetic getting their insulin restored so they never have to get shots?”