OLYMPIA— In many places across Washington, the opioid epidemic is far from over.

City leaders have committed sizable sums of tax dollars and resources to the seemingly endless challenge of assisting those in the throes of addiction.

They’ve teamed social workers with cops to steer people away from jail and into treatment and recovery services. They’ve deployed professionals to assist parents in helping loved ones struggling with addiction. It’s not easy, inexpensive or likely to end soon.

Now cities and counties are poised to get financial help from the nation’s three largest distributors of prescription opioids, firms that many hold responsible for fueling the epidemic.

Under a proposed settlement, McKesson Corp., Cardinal Health Inc. and AmerisourceBergen Drug Corp. will pay $518 million to Washington in the next 17 years for use by cities, counties and the state in combating the effects of opioid use disorder.

The first allotments could arrive in December.

“I see this as the opioid companies paying for what we’ve been paying for,” Arlington Mayor Barbara Tolbert said. “I can’t fault that.”

Washington Attorney General Bob Ferguson announced the “resolution in principle” with the three firms on May 3. It ended a six-month trial on allegations by the state that the firms helped fuel the epidemic by shipping huge amounts of oxycodone, fentanyl, hydrocodone and other prescription opioids into the state, even when they knew — or should have known — they might wind up with drug dealers or those already addicted.

The companies rejected the accusations. They said they merely supplied opioids that had been prescribed by doctors, and it wasn’t their role to second-guess the prescriptions or interfere in doctor-patient relationships. And the deal finds no wrongdoing on their part.

Before then, other conditions must be met.

One requires the 37 cities, counties and school districts that sued those drug distributors on their own to dismiss their cases and agree to the settlement terms. If even one municipality doesn’t agree, it could scuttle the deal. The deadline to act is Sept. 23.

“There are still quite a few details the city needs to know before deciding how to move forward,” city of Everett spokesman Julio Cortes said. 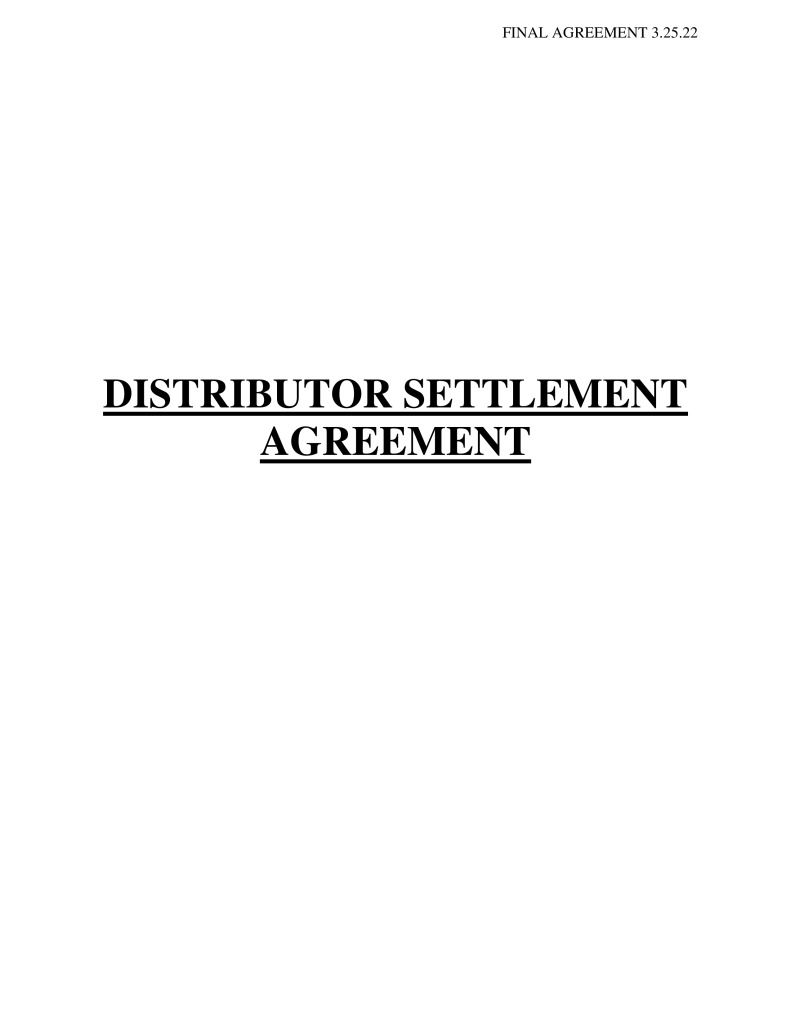 Jason Cummings, chief civil deputy prosecutor for Snohomish County, said he is waiting for more information, such as how the money will be allocated, before advising the County Council on how to proceed.

“We want the council to be fully informed of what they are signing off on,” he said. “I think the amount of money the distributors are willing to put on the table speaks volumes to the issues of law and responsibility.”

Another condition of the settlement concerns roughly 90 jurisdictions with populations greater than 10,000 that did not sue. At least 90 percent of them must agree to the terms, too. Anything less could mess things up.

“I do not anticipate any problems getting them to sign,” Ferguson said.

The vast majority from the three distributors, $476.2 million, will be split between the state and local governments and is intended for addiction treatment, prevention services, opioid education and other programs to address the societal impacts of the opioid epidemic. The remainder of money is for attorneys’ fees and includes $10.9 million for legal expenses incurred by the entities that sued.

The exact split of dollars between the state and local governments will be covered under a separate agreement that could be finalized in the near future. 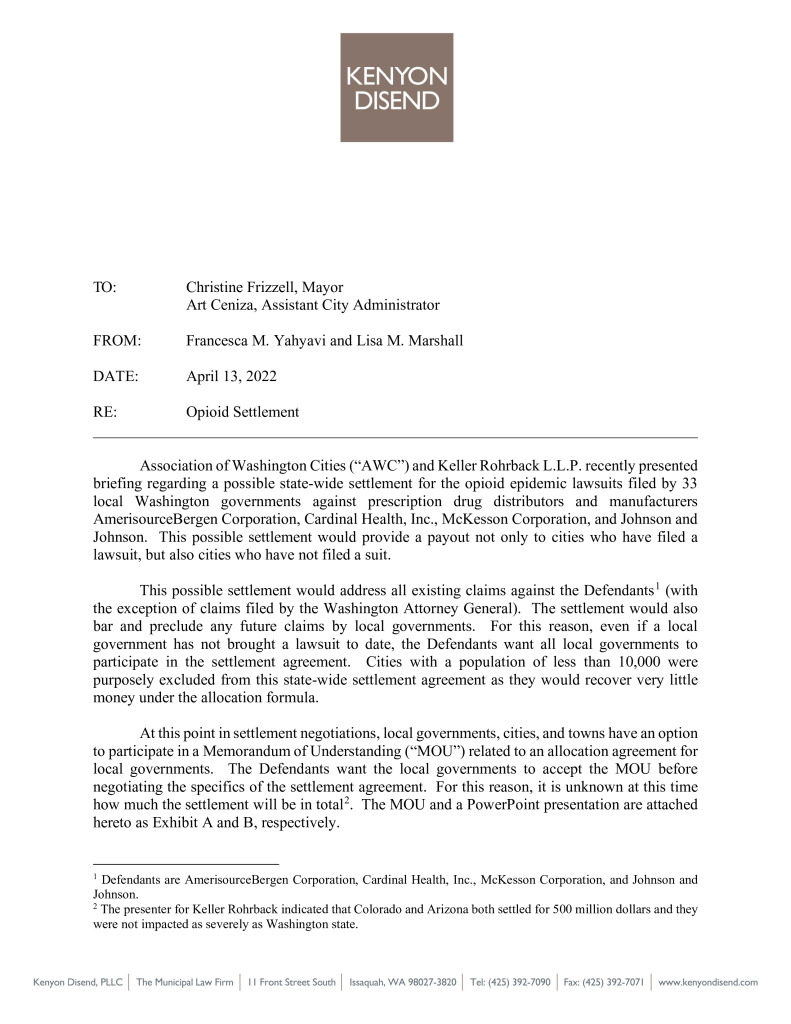 Negotiations are underway between the state and Keller Rohrback, a Seattle law firm that represents 33 local jurisdictions that sued distributors.

Well before Washington reached a deal with opioid distributors, attorneys at Keller Rohrback drafted a detailed blueprint for how to divvy up dollars among local governments, in anticipation of a settlement.

Arlington, Snohomish and Lynnwood are among the cities to have signed on to what is known as the One Washington Memorandum of Understanding.

It lays out a formula for allocating settlement funds calculated on three factors: the amount of opioids shipped to a county, the number of opioid deaths in that county and the number of people who suffer opioid use disorder in the county. Such data does not exist for cities. Under the memorandum of understanding, federal data on opioid-related expenditures is used to determine shares for cities.

Snohomish County, for example, would receive around 6.9 percent, while King County, not surprisingly, would receive the single largest slice, 13.97 percent. Among cities, Tacoma’s share is 3.28 percent, Everett’s is 1.92 percent and Arlington’s is 0.26 percent.

The memorandum of understanding also calls for establishing opioid abatement councils to oversee spending of the settlement funds.

A spokeswoman for Ferguson said two conversations are occurring.

“Essentially, the state is in talks with the locals as to the state/local split. Separately, the locals are in talks with each other as to how to share the local dollars amongst themselves,” said Brionna Aho of the Attorney General’s Office. “The agreement (with local governments) is not finalized, but the state’s view is that the local governments can decide among themselves how to split the funds as provided for in the (memorandum).”

Ferguson originally filed his suit against McKesson, Cardinal Health and AmerisourceBergen in March 2019.

By then, Snohomish County and Everett, among other local governments, had already launched legal actions of their own against that trio, and other makers and sellers of opioids, joining a long list of local and state governments across the country seeking damages for the toll that OxyContin and similar drugs have taken on society.

As the number of claims morphed into the hundreds, the trio of firms sought to negotiate a means to resolve them all at once.

The result was a 571-page global settlement announced July 21, 2021, in which the three prescription drug distributors agreed to pay out $21 billion over 18 years. It also laid out specifics as to how the dollars could be spent, a move sought by the firms to ensure cities and states didn’t spend the dough on other programs.

More than 40 states accepted the deal. Washington — which stood to receive $430 million to fight opioid use disorder — was not one of them.

“The settlement is, to be blunt, not nearly good enough for Washington,” Ferguson said at the time. “It stretches woefully insufficient funds into small payments over nearly 20 years, to be shared among more than 300 Washington jurisdictions. We are looking forward to walking into a Washington state courtroom to hold these companies accountable for their conduct.”

The trial on his lawsuit began in November. By March, there were signs it was not heading in a good direction for the state.

After the proposed settlement with the state was reached May 3, Ferguson said going to trial always carries a degree of risk. You don’t want to lose, he said, nor do you want to win and end up with less than you might have had. They continually examine the risk, he said.

“We forced these companies to stand trial for their conduct,” he said. “And the state will end up with $46 million more to fight opioid use disorder than it would have from the original national settlement.”