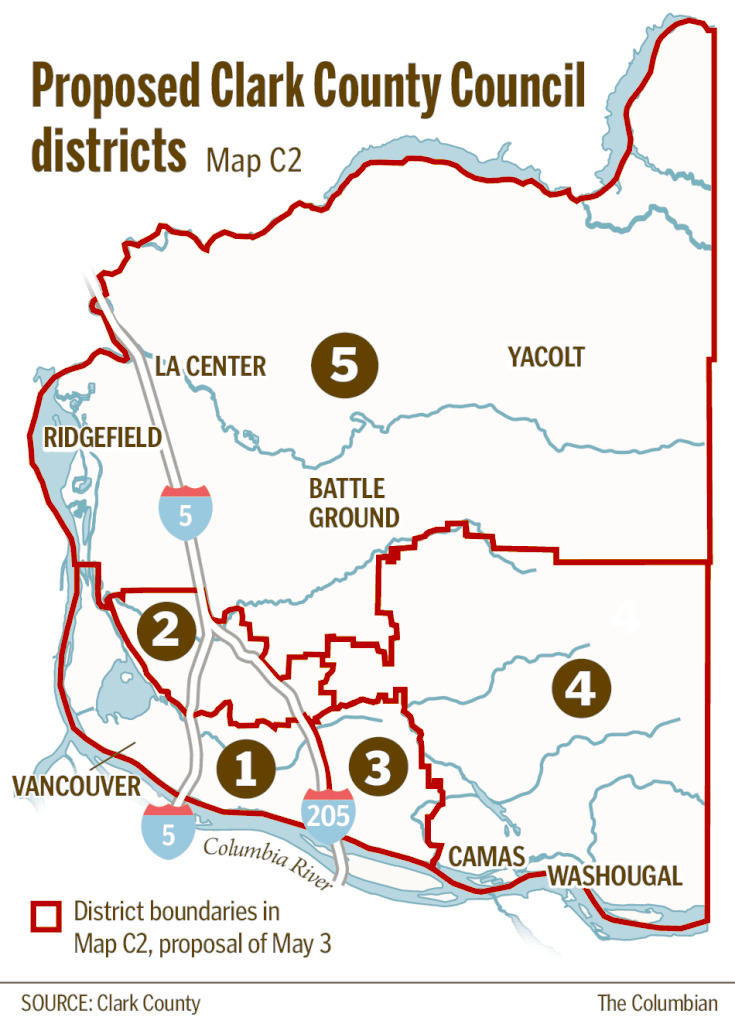 Clark County finally has a new district boundary map — and a lawsuit seeking to have it thrown out.

The council’s vote came despite urging by residents offering public testimony to reject the map and instead vote for the 04-19-2022 map previously considered by the council.

“I’ve been watching this process in horror for months now,” Battle Ground resident Jackie Lane said during the hearing. “This map before you is the furthest from the map voters approved in November.”

Jason Aurand warned that the council could face a legal challenge if it voted to approve C2.

Ellie Hutton, speaking for the League of Women Voters, said the organization was “disheartened” by the council’s support of the C2 map.

“To introduce a new map at this point is an insult to the public and to our Elections Office. Doing so goes against all of the principles and rules of redistricting,” Hutton said, reading a letter from League president Nancy Halvorson.

Hutton said the 04-19-2022 map best met the will of voters while also complying with state requirements.

Despite the dozens of written and verbal comments offered before and during the public hearing in support of the 04-19-2022 map, Rylander stood behind his decision to support C2.

“Regarding Map C2’s adoption: First, it was created by the redistricting committee. I understand it went through a process and there was a preferred map, i.e. B2, that came forward, but this originated with that committee who was tasked with coming up with map choices,” Rylander said.

During a May 4 council meeting, Rylander said he had spent part of the week reviewing the various map iterations with Geographic Information Services staff member Paul Newman and had him update Alternative C to bring it current with precinct and legislative requirements.

According to Newman, both Alternative C and map C2 keep Bowerman in District 3 and both would move Olson into District 5. By comparison, both the 04-19-2022 map and B2 map previously considered by the council would have moved Bowerman into District 4.

As Rylander was discussing his reasons for supporting the C2 map, angry voices could be heard coming from the audience, briefly interrupting the council meeting. Bowerman noted that further interruptions could lead to the meeting being canceled or the sheriff’s office being brought in to maintain order.

While the redistricting committee did create Alternative C, Lentz noted that it did not support or approve the map. She said many materials come out of committee meetings, but if they don’t move forward, that generally implies they’ve been rejected. She also refuted Rylander’s claims that the council had not interfered in creating the C2 map.

Tags
Clark CountyClark County Government
Receive latest stories and local news in your email:
By signing up you are agreeing to our Privacy Policy and Terms of Service.