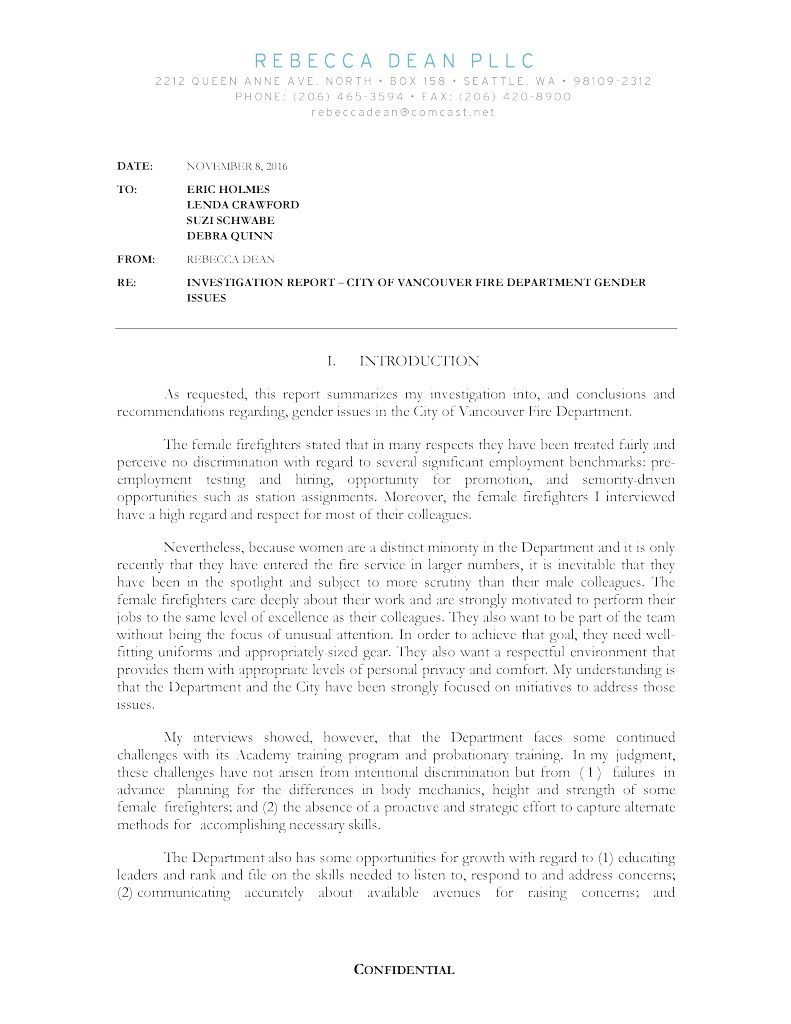 Women firefighters in Vancouver faced greater scrutiny because of their gender and were criticized when they raised concerns about adult magazines left in the workplace and a lack of privacy in the restrooms, according to an investigation obtained by The Columbian.

The report highlighted the difficulty the women faced when trying to speak freely about their work environment. The report also states that the Vancouver Fire Department values “cohesion and conformity.”

Vancouver Fire Chief Joe Molina said the department is committed to looking at its culture and making changes.

In June, the city of Vancouver hired a Seattle-based investigator to look into the department after a female firefighter was using a women’s restroom in Station 10 and her male boss walked in on her. When confronted, the division chief, Drew Tracy, admitted entering the women’s restroom, according to emails obtained by The Columbian. His response allegedly was that “the door was not locked.” The female who raised concerns initially was told, “so you’re going to go there” when she pointed out that she didn’t have a private restroom to use.

The city hired Seattle-based investigator Rebecca Dean, at a cost of $21,882, to take a deeper look into the department’s treatment of women. There are only five women who are emergency responders out of 182 firefighters total.

The investigation revealed more issues within the department, including women being singled out for struggling to learn new techniques and women feeling unwelcome in what was described as a “frat-like” environment.

The Columbian obtained Dean’s investigation through a public records request. The report highlighted the following concerns.

• Uniform and equipment issues: One of the primary and most immediate concerns of the women were the heavy, ill-fitting uniforms and the department’s physical facilities. Women reported needing to wake up early or wait until after their shift to use showers. Although the department was slow to act to initially, after the city and the union representatives intervened, some progress was made. Because of the progress, Dean did not delve deeper into these issues in the report.

But their relationships are distinct from the ones the male colleagues enjoy, who often bond outside of work in a more social setting. When one female firefighter socialized with an unmarried male colleague, their co-workers created a bet to see how long it would be before they slept together.

A normal shift for a firefighter often lasts 24 hours. Because they often stay overnight in the station, some firefighters watch shows on Cinemax, HBO, or Showtime with explicit nudity and sexual language. One female firefighter reported her male colleagues would turn a program off when she walked in to watch it, which she felt created resentment toward her.

Adult magazines also were found in the women’s bathroom and elsewhere. When a female firefighter reported the magazines to a supervisor, in what she believed was a confidential conversation, word soon spread with the reaction being that she had “made a big deal” out of the magazines.

In another instance, a captain approached one of the women to ensure she knew it was because of her that they had to change bathrooms at Station 5.

As Dean points out, “such comments left the female firefighters feeling that they should apologize to their colleagues for raising legitimate concerns.”

• Problems at Station 5: The investigation paints Station 5 as one of the more driven and also insular stations. It’s the largest station and receives the most calls. When one of the female firefighters was assigned to the station, she reported feeling unwelcome. She was frequently assigned to a fill a vacancy at Station 5 and once she arrived, the captain on duty would allegedly tell her to “wait a minute” and reassign her to another station, making her leave.

The same firefighter reportedly asked the captain how she could fit in better. She was told, according to the report, that she was a guest at the station and she should do more chores, including cleaning up after meals. She was told this despite there being a male firefighter who was junior to her on the same shift. The captain denied having the conversation.

During the summer of 2015, the same firefighter said the crew at Station 5 would give her incorrect information about the day’s plan, such as what time they planned to would work out or when they would be training. As a result, she frequently missed the group events. The captain said this was not deliberate misinformation but rather due to a frequent change in schedules throughout the day because the station is busy.

A particular captain, however, opposed the changes and took aim at the female firefighters. The captain allegedly asked the crew how they liked the “new women’s ladder throw.” The captain denied this and said he called it the “Nancy throw.” Olson noted that the ladder throw change wasn’t due to any women raising concerns, but rather because of safety issues.

In another case, a female firefighter had trouble with the ladder throws. About three weeks into her probationary period, she was practicing the 35-foot ladder throw. She was told to repeat the exercise 10 times, past the point of exhaustion. She couldn’t bring the ladder down safely, it fell and she injured herself. Chief Molina said that the demand to repeat the throw until fatigue set in was not standard training and should not have been done.

Next year, the Vancouver Fire Department will be 150 years old.

“It’s a great department,” Molina said. “It’s good at what it does. It serves the community well. But we clearly haven’t been attentive to everyone.”

Molina said the department is reviewing its training policies and although city employees watch a training video on sexual harassment every two years, Molina said it needs to be catered for his first responders.  Since firefighters live at the station it’s a different environment compared to those who work in a cubicle at city hall.

“It is first and foremost a workplace,” Molina said. “They live there. They eat there. They sleep there. They get a little lackadaisical … With a predominantly male work force, it’s easier to have more frat-house behavior, but it’s not acceptable.”

“We have to look at how we teach folks to do things and say, ‘Is there an inherent bias?’ … If we can do it safely and another way, why wouldn’t that be acceptable?” Molina said.

Molina said conversations about the report are ongoing but people could be reprimanded.

“It’s time for us to take the culture to the next evolution and make the (next) 150 years even better,” he said. “It’s about being professional and making sure everyone holds others accountable.”