Initial results will be announced about 8:30pm.

More about this election

Not sure which district you're in? Find out here. 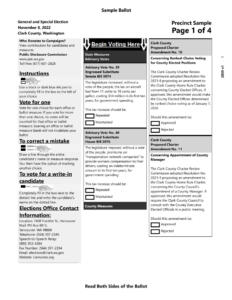 More on this election's races

For more than two decades, Greg Kimsey has served with integrity, honor and transparency as Clark County auditor. The Columbian’s Editorial Board strongly recommends that…

For more than a decade, Paul Harris has represented the 17th Legislative District in a thoughtful and pragmatic manner. The Columbian’s Editorial Board recommends that…

Voters who believe in the rule of law are fortunate to have one worthy candidate on the ballot for Clark County sheriff. The Columbian’s Editorial…

Seize control of your government: Vote

American voters are a strange lot. For almost two years, we’ve argued incessantly about the 2022 midterms, in which alleged political misdeeds from 2020 will…

Three Seattle-based corporations, including The Seattle Times, have asked Tiffany Smiley, the Republican challenger for U.S. Senate, to stop using their copyrighted material in campaign ads, spurring a fiery response from Smiley's campaign, which filed a complaint with the Federal Election Commission. Read story

The three women who want to be Oregon’s next governor clashed Tuesday over gun control, abortions and other hot-button issues at an in-person debate, just six weeks before election day. Read story

There are little nooks in Washington that are easy to overlook to those who live outside of them. Read story