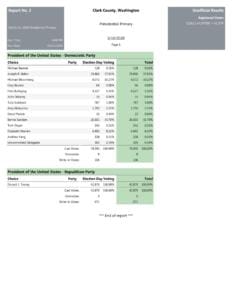 Day three of filing week at the Clark County Elections Office included an oddity: The number of candidates listed as having filed for public office, a figure that would usually grow throughout the week, dropped by half. Read story

Campaign signs may have started cropping up months ago, and fundraising events even earlier than that. But the 2020 election will formally kick off in earnest Monday, when candidates can start filing to appear on the Aug. 6 primary election ballot. Read story

When Carolyn Long launched a bid for Congress in 2018, her message revolved largely around showing up. Read story

WASHINGTON  — Sen. Bernie Sanders, who saw his once strong lead in the Democratic primary evaporate as the party’s establishment lined swiftly up behind rival Joe Biden, ended his presidential bid on Wednesday, an acknowledgment that the former vice president is too far ahead for him to have any reasonable hope of catching up. Read story

How will we vote? Outbreak revives debate on mail-in ballots

OLYMPIA — As the coronavirus pandemic knocks primary election after primary election off schedule, Democrats argue the outbreak shows the country needs to move toward one of their longtime goals — widespread voting by mail — to protect the November election. Read story