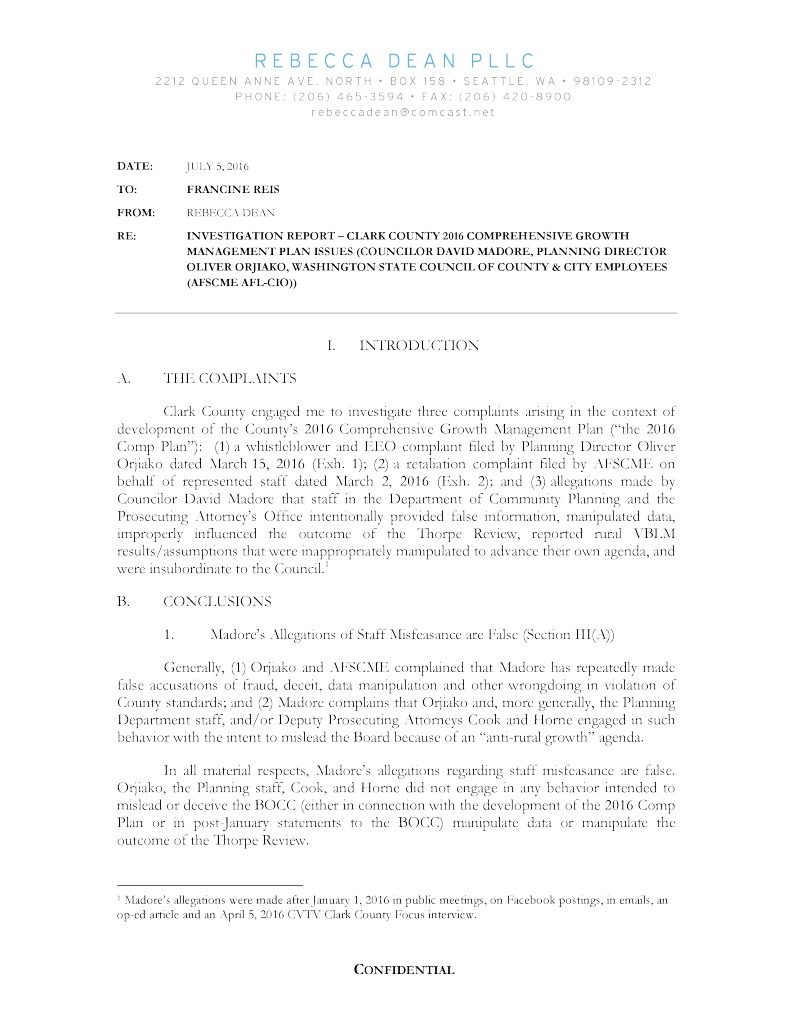 Clark County Councilor David Madore’s repeated and ongoing accusations of wrongdoing by the county planning director, planning staff and county prosecutors are false, according to the results of a nearly four-month investigation released Wednesday afternoon.

Rebecca Dean, a Seattle attorney, has been investigating questions and attacks Madore and County Planning Director Oliver Orjiako have leveled against each other over Clark County’s Comprehensive Growth Management Plan update since March. The investigation cost $54,936.97, according to a county news release. Dean charged $240 an hour.

Madore has accused county staff of insubordination and lying about the impact of his proposed zoning map, Alternative 4, and a later version, Alternative 4B. Madore’s proposal, which was rejected by the council earlier this year, would have allowed for the creation of thousands of lots in rural Clark County.

But in a 40-page summary of the 400-page investigation, Dean reports that Madore’s accusations that Orjiako and Deputy Prosecutors Chris Cook and Chris Horne lied to the county council in order to pursue an “anti-rural growth agenda” are “in all material respects,” false. Madore’s allegations that county staff interfered with the work of R.W. Thorpe and Associates — a planning consultant Madore hand-selected to review his policies — are also false, Dean said.

“Orjiako, the Planning staff, Cook and Horne did not engage in any behavior intended to mislead or deceive the (Clark County council), … manipulate data or manipulate the outcome of the Thorpe Review,” Dean concluded.

The report also affirms allegations made in a whistle-blower complaint by Orjiako and a complaint by public-sector union AFSCME that Madore interfered with community planning’s work.

“Madore attempted to directly micro-manage the Planning staff’s work on the 2016 Comp Plan and attempted to pressure Orjiako not to exercise independent professional judgment and criticize Alternative 4B and Madore’s methods,” Dean reported.

The report did not find, however, that Madore’s attacks were done to get back at Orjiako for protesting Alternative 4, nor at the union for complaining about him in November. It also does not find enough evidence that Madore attacked Orjiako because of the Nigerian-United States dual citizen’s race or national origin.

“No evidence of misrepresentation, no use of secret or ‘covert software’, and no ‘insubordination’; only evidence of a deliberate effort to conduct myself with honestly and with integrity,” Orjiako said. “The report certainly shows that I did nothing wrong or dishonest, and that Councilor Madore did indeed make many false statements about me and my staff.”

Prosecutor Tony Golik did not wish to comment, saying he needed more time to read and digest the report, which was released late in the afternoon. Madore, as is habit for the Republican councilor, did not return a request for comment from The Columbian.

It was unclear Wednesday what the consequences might be of the report, though Clark County Chair Marc Boldt, no party preference, said it’s “going to have to be a thing that we discuss for sure.”

“I’m just glad to see the results about Chris (Horne), Chris (Cook) and Oliver (Orjiako),” Boldt said. “I think we’re going to have to seriously think of the ramifications of what it has done to the employees and go from there.”

More than half of the 40-page summary is dedicated to explaining, then rebutting, more than a dozen allegations Madore has made for nearly a year against county planning staff and county prosecutors.

In all, 11 of Madore’s allegations were found to be false and another to be partially false.

Chief among them is Madore’s ongoing accusations that county staff used “covert” software in order to exaggerate the number of lots created by Alternative 4 or Alternative 4B.

Interviews with Geographic Information Services Manager Bob Pool and GIS Coordinator Ken Pearrow indicate the county did calculate the number of lots that could be created in the rural area, as it always has.

There’s also no reason to believe the software the county used was somehow secretive or held from public view.

“It is possible that no one outside GIS was familiar with the specific mapping tools, scripting languages or programs, but it is difficult to see why that would constitute some kind of deception — or why it would matter,” Dean wrote.

The report also details how Madore worked closely with Clark County Citizens United, a rural landowners special interest group, to develop the alternative. Madore had GIS software installed on his personal computer, according to the report, allowing him to create his own land-use alternative.

According to interviews with Pool, Madore would instruct staff to remove individual properties with no explanation from the list of properties likely to develop if Alternative 4 went through. Pool described it as a “bad process” that bypassed the Clark County council entirely.

The findings could blow a hole in one of the biggest arguments by CCCU: that county staff used erroneous formulas to exaggerate the impact of subdivisions in rural Clark County as part of an anti-growth agenda.

There’s no evidence that staff had an “anti-rural growth agenda,” as CCCU and Madore have accused them, Dean reported. The only agenda staff had, she wrote, was to follow the requirements of the Growth Management Act, minimize any legal harm the county may face and to adhere to their “professional performance and ethical standards.”

“In short, Madore has cast his personal political view of the Growth Management Act and how it has been implemented in Clark County in the form of an unwarranted and highly personal attack of Orjiako and Cook,” she wrote.

CCCU President Susan Rasmussen has not responded to a request about whether the organization will appeal the growth plan, and there are no appeals from anyone over the growth plan update listed on the Growth Management Hearings Board’s website.

Allegations by Orjiako and the union that Madore had retaliated against them because of complaints they made proved difficult to verify.

There is overwhelming evidence that Madore was reacting to the failure of his zoning proposal rather than to Orjiako’s nationality or race, or to the union’s November complaint that Madore was doing work that should have been done by union employees, Dean reported.

There is “limited evidence” of race-based hostility on Madore’s part. Specifically, she cited Madore’s posting of a “race card” meme depicting a king of spades card with President Barack Obama’s face superimposed on the face of the king.

“When truth and logic fail, play the race card,” reads the meme Madore posted in response to Orjiako’s allegations of racism by the councilor.

Dean reported she was “troubled” by the graphic, which Madore defended by saying he posted it as a “citizen reporter.”

Madore went on in that interview, defending his use of an image with Obama’s face on it because “Obama has ‘done more to cause racial divide in this country than anyone else.’ ”

Orjiako’s attorney, Greg Ferguson, said it is “astounding” that Madore responded to accusations of racism by posting a derogatory comment and image on his Facebook page.

“Racial animus is often proven by precisely that type of pigheadedness,” Ferguson said.

Dean also confirmed that Madore expressed frustration with Orjiako’s formal way of speaking, but noted that does not “equate to irritation with his accent.”

Jose Alvarez, a planner and shop steward, said “he had no other documents or information that would suggest that Madore was motivated to retaliate by AFSCME’s complaint” apart from the timing.

“Given the overwhelming evidence of Madore’s other motives, proximity in time considered alone is unpersuasive,” Dean wrote.

Orjiako is also in the midst of a lawsuit with Clark County that alleges Madore has been allowed to withhold public documents in connection to his whistle-blower complaint. Ferguson said a settlement offer to the county was rejected last week.

Ferguson said he plans to ask a judge for an order permitting direct access to Madore’s cellphone carrier to retrieve records from his device.