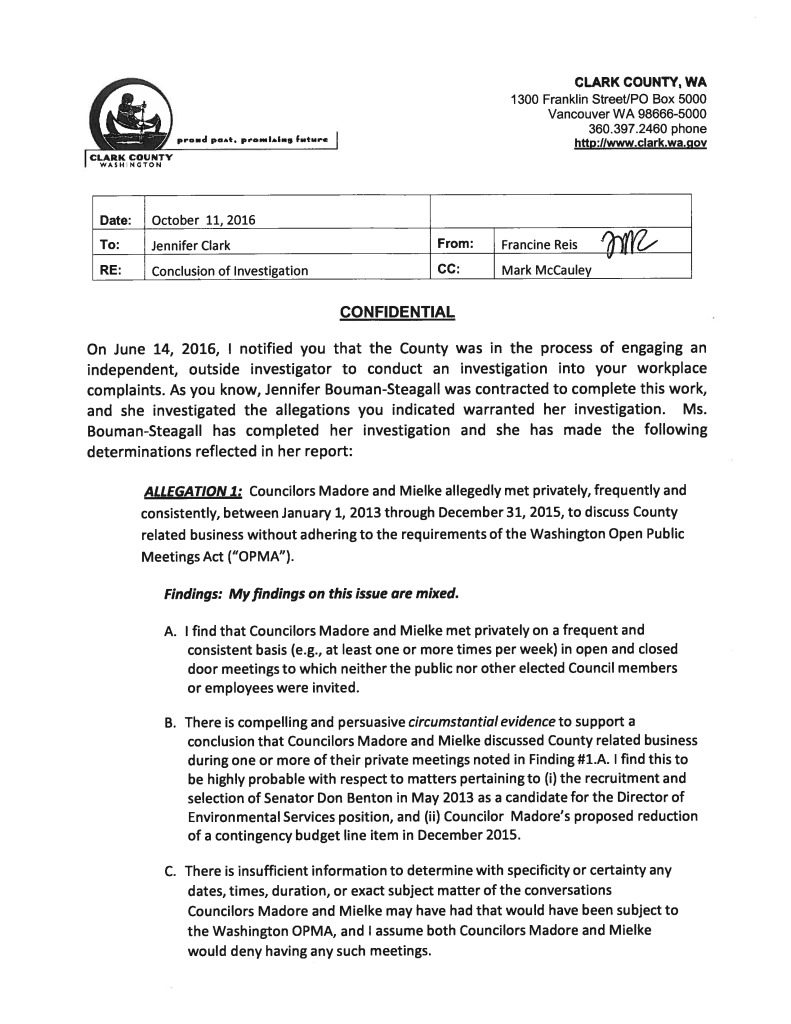 An independent investigator found that Clark County Councilors Tom Mielke and David Madore met “privately on a frequent and consistent basis” from 2013 through 2015 — prior to the council expanding from a three-member board to a five-member board.

The report responds to a whistleblower complaint by Jennifer Clark, an administrative staffer in the Clark County councilors’ office. Clark provided a copy of the report to The Columbian.

Clark alleged in her May complaint that Madore and Mielke met privately to discuss county business in violation of the Washington Open Public Meetings Act, and that Madore had destroyed a slew of public documents after his private assistant, Anna Miller, retired.

“Councilor Madore prides himself on transparency however conducts himself in a different matter,” Clark said. “You are what you do, not what you say you will do. As a taxpayer and a Clark County employee, nine weeks can’t come any sooner. We can’t afford to have this man in office anymore.”

According to the report, Madore and Mielke met privately at least once a week “in open and closed door meetings,” where neither the public nor other councilors were invited, Bouman-Steagall found.

She added that there is “compelling and persuasive circumstantial evidence” that Madore and Mielke discussed the controversial hiring of Sen. Don Benton, R-Vancouver, to lead the now-defunct Environmental Services Department. Benton has since been laid off, having lost that job when County Manager Mark McCauley dissolved the department earlier this year.

At that meeting, Madore and Mielke voted to reduce the amount of money the Community Planning Department received in contingency funds for the Comprehensive Growth Management Plan update. Madore and Mielke can be seen talking during a break in the hearing, and after returning to open session, Mielke turned to Madore.

“I think we have an agreement,” Mielke said, pointing to Madore. “Do you want to speak up here?”

From there, Madore motioned to give Community Planning $65,000 rather than the requested $300,000. Republican Councilor Jeanne Stewart pressed her fellow councilors on where that number came from, and eventually voted against the proposal.

Where Bouman-Steagall’s report gets squishy, however, is on the timeline of when Madore and Mielke may have had meetings that violated the Open Public Meetings Act.

“I assume both Councilors Madore and Mielke would deny having any such meetings,” she wrote.

The attorney’s findings in Clark’s allegations regarding public records were more inconclusive. Clark reported seeing Madore throwing away a number of folders and documents into two large recycling bins, and provided work orders showing the councilor ordered the bins delivered to his office.

While Bouman-Steagall found Madore recycled a “significant number of documents” after Miller left, it’s unclear whether any of the material he threw out were public records that needed to be kept.

She also noted that there isn’t enough information to determine what documents existed before November and what was recycled, making it difficult to say whether documents should have been kept under the Public Records Act.

Madore and Mielke did not return requests for comment.