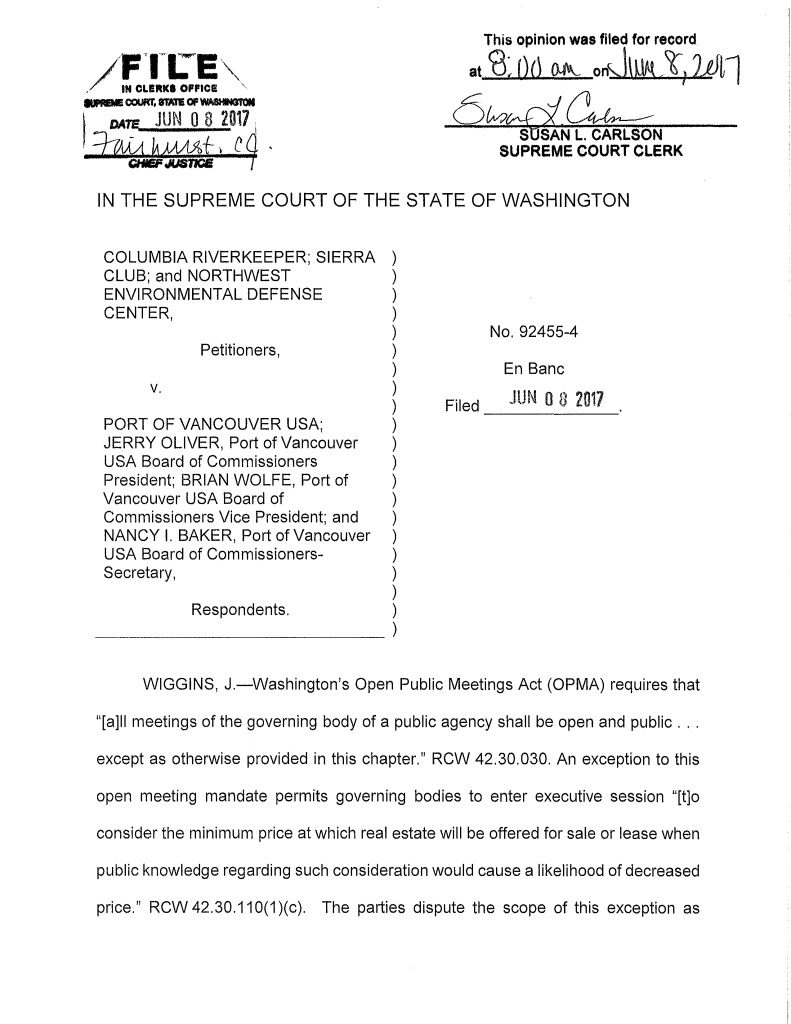 The Washington State Supreme Court found the Port of Vancouver discussed too much behind closed doors when it considered a lease for the proposed Vancouver Energy oil terminal in 2013.

The court’s Thursday ruling overturns Clark County Superior Court Judge David Gregerson’s ruling from 2015 and suggests the port violated the state Open Public Meeting Act. The court didn’t rule on the validity of the lease. The case will now be sent back to the lower court to be reheard.

“This is a huge win,” said Brett VandenHeuvel, executive director of Columbia Riverkeeper, one of the three conservation groups that brought the suit. “We now have a precedent that ports can’t block the public in critical discussions about public safety and environmental impacts.”

The decision is just the latest chapter in an ongoing saga between the Port of Vancouver and those that oppose its lease with Tesoro Corp. and Savage Cos., now operating jointly as Vancouver Energy.

Columbia Riverkeeper, the Sierra Club and Northwest Environmental Defense Center asked the court to clarify what is and isn’t fair game for discussion under what’s commonly called a “minimum price” exemption in the state Open Public Meetings Act.

That exemption allows government bodies to meet in executive session “to consider the minimum price at which real estate will be offered for sale or lease when public knowledge regarding such consideration would cause a likelihood of decreased price.”

The state’s top court ruled that a government body may discuss a minimum price figure for the sale or lease of property in executive session; but the factors that set the property’s value must be considered in an open meeting.

The conservation groups asked the Supreme Court to clarify the exemption’s scope after Gregerson ruled largely in favor of the port. In his 2015 decision, Gregerson ruled five of the port’s seven executive sessions were properly held when they discussed the minimum price of the lease they’d offer Tesoro-Savage.

During the Supreme Court hearing, the port argued for a broad interpretation of the exemption. It also claimed that it didn’t violate open meetings law because factors including safety, job creation and environmental impacts all could influence the lease price and it’s the port’s responsibility to get the highest possible value.

According to the decision, the port feared discussing key details in public would open the project up to “poaching” by other rival ports. In the document, Commissioner Jerry Oliver is quoted as saying that keeping information from the public is justifiable because the public includes the competition.

“The region’s ports, we are assured, are ‘cutthroat competitors,’ ” he’s quoted within the document. He added that the port and its commissioners “try to be transparent … sometimes we feel that it is necessary to restrict the flow of information to protect either our tenant or ourselves from competitive influences.”

Columbia Riverkeeper argued for a narrow interpretation of the exemption, limiting discussions to “the least amount to be accepted for a lease” or, as a middle ground, “some discussion of the reasons supporting a particular price” so long as it focused on setting the minimum price.

The court ruled protections in the public meetings law must be broadly interpreted and its exemptions interpreted narrowly.

“We are not permitted to frustrate these goals of transparency and popular sovereignty by approving expansive discussion in executive session of matters squarely in the public interest,” wrote Justice Charles Wiggins. “Here, the Tesoro-Savage lease involved topics that were clearly matters of substantial public concern, including environmental risks, public safety hazards, and local economic impacts.”

Eric D. Johnson, executive director of the Washington Public Ports Association, said the ruling offers important guidance for government bodies on what can and can’t be discussed behind closed doors.

The Columbian's three-day series was the result of a months-long examination of more than 1,700 public documents; testimony and remarks delivered during public meetings; and interviews with open-government experts, Port of Vancouver officials, and others.

The public documents analyzed include more than 300 pages of depositions taken of port commissioners as part of an ongoing lawsuit that accuses the port of violating the state's open public meetings law in deciding the oil terminal lease.

The initial lawsuit, filed in October 2013, cited information contained in a July 31 story by The Columbian that first revealed apparent breaches by the port of the open public meetings law. For the series, the newspaper obtained other documents through public disclosure requests. Those records include port emails, commission agenda materials and an internal report.

Day 2: Sealing the oil terminal deal behind the scenes.

“It’s a big deal to the extent that it’s the first case that’s given us guidance on that particular (exemption) in the Open Public Meetings Act,” he said. “I don’t know if it’s going to be a dramatic change in practice, but we’re all going to have to be careful that we understand it and follow it.”

In response to the ruling, port spokeswoman Abbi Russell wrote in an email, “We expected the (state) Supreme Court to offer further definition of ‘minimum price,’ which is helpful for all municipalities to ensure we continue carrying out our missions with transparency. The court remanded the case to the trial court and we’re continuing to review the opinion to determine next steps.”

If built, the Vancouver Energy terminal would receive oil shipped by 1.5-mile-long unit trains from North Dakota and transfer it into marine vessels bound for refineries along the West Coast. The terminal would be capable of transferring an average of 360,000 barrels of oil per day.

Currently, the project is working its way through an evaluation by the Washington state Energy Site Evaluation Council. Gov. Jay Inslee has the final say on the terminal’s approval.