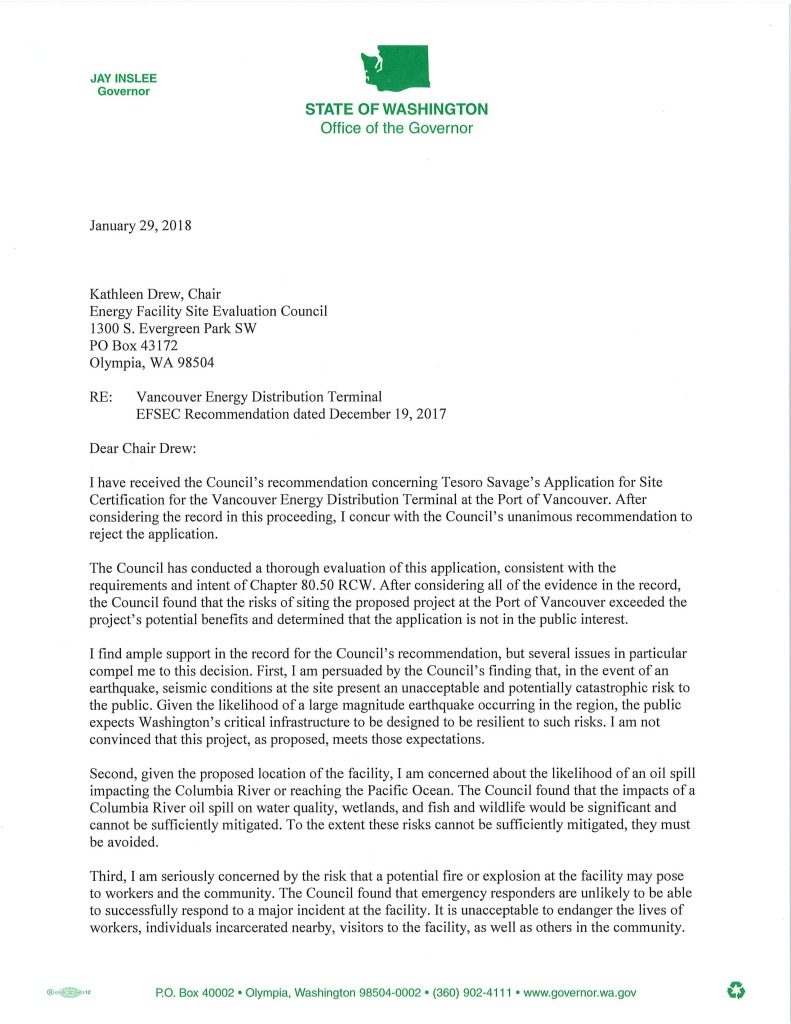 Fossil fuel opponents rallied through a rainy afternoon on the porch of the Slocum House in Esther Short Park on Monday, celebrating Gov. Jay Inslee’s decision to reject Vancouver Energy’s proposal to build the nation’s largest crude-by-rail oil terminal at the Port of Vancouver.

The rally was set up just hours after Inslee sent a letter to the Washington Energy Facility Site Evaluation Council containing his decision to reject the proposed terminal.

“We did our due diligence in reviewing the facility and the (EFSEC) record. We found it extremely thorough,” Inslee told The Columbian. “It examined in detail and great depth the issues we faced. … (This decision) is not one that required original research.”

In his letter to EFSEC explaining his decision, Inslee described the application as “unprecedented both in its scale and the scope of issues it raised.” He said that he was persuaded by the panel’s reasoning and agreed with its recommendation to deny the project.

“Our mission continues to be providing economic benefit to our community through leadership, stewardship and partnership in marine, industrial and waterfront development,” she said. “We appreciate the governor’s recognition of our important role in regional trade, and we will continue to fulfill that role.”

In November, EFSEC unanimously recommended that Inslee reject the terminal, citing five significant and unavoidable impacts should the terminal be constructed.

In his letter, Inslee said he found “ample support” in the project’s evaluation record to support EFSEC’s decision, but three issues in particular stood out. Inslee wrote that he was convinced by the council’s finding that the site chosen for the terminal presented an “unacceptable and potentially catastrophic risk to the public” if the region were to be struck by an earthquake.

“Given the likelihood of a large magnitude earthquake occurring in the region, the public expects Washington’s critical infrastructure to be designed to be resilient to such risks. I am not convinced that this project, as proposed, meets those expectations,” he wrote.

Inslee also said he was concerned about the likelihood of an oil spill harming the environment, wildlife and water quality of the Columbia River or reaching the Pacific Ocean. In its evaluation, EFSEC found that the ecological impacts of an oil spill could not be fully mitigated. Inslee’s letter said risks that cannot be sufficiently mitigated must then be avoided.

Lastly, he was “seriously concerned” by the risks a fire or explosion at the facility would pose for employees and Vancouver at large. He cited EFSEC’s findings that emergency responders would likely not be able to contain a major incident at that facility. Inslee said it was “unacceptable to endanger the lives of workers … as well as others in the community.”

“The Council has thoroughly examined these and other issues and determined that it is not possible to adequately mitigate the risks, or eliminate the adverse impacts of the facility, to an acceptable level,” Inslee wrote. “When weighing all of the factors considered against the need for and potential benefits of the facility at this location, I believe the record reflects substantial evidence that the project does not meet the broad public interest standard necessary for the Council to recommend site certification.”

After striking down the project, the governor sought to strike an optimistic tone about Washington ports’ role in future economic development.

“While this process has demonstrated that this particular project is wrong for this particular proposed location, I am confident that our ports will continue to play an important role in regional trade, and providing opportunities for jobs in clean energy,” he wrote.

The companies behind the terminal, Andeavor — formerly Tesoro Corp. — and Savage Cos. have proposed a $210 million rail-to-marine oil terminal at the Port of Vancouver. The terminal could transfer an average of 360,000 barrels of oil per day from mile-long crude oil unit trains into marine vessels in the Columbia River bound for refineries along the West Coast.

“The future is bright in the county for new high-tech business and amenities,” Inslee said. Some in the business community “were very concerned this would retard economic growth.”

Inslee wouldn’t name which local business leaders expressed that concern, but he added, “I think it makes sense to look at growth as a whole, not just one sector. … I think you’ll find an image of a community is important.”

While the news is bad for Vancouver Energy, it’s good news for the people backing The Waterfront Vancouver. Expected to cost $1.5 billion, the project plans to build upscale restaurants, offices and thousands of apartments less than 2 miles from where the terminal was proposed.

“It’s sure nice to have that whole chapter behind us,” said Barry Cain, whose company, Gramor Development, is leading the redevelopment. “Now we can all move on together and make downtown Vancouver everything it can and should be.”

To people watching the process closely, the terminal’s odds seemed to grow longer by the day. After four years of evaluation, in November EFSEC unanimously recommended Inslee deny the project. At the first meeting of the year, the Port of Vancouver Board of Commissioners set March 31 as the final date for Vancouver Energy to have all necessary state and federal permits for operation in place.

Under state law, Inslee had the option to approve the project outright, approve it with conditions or reject it outright. Many of those eyeing the process also expected Inslee to stick to his pro-environmental philosophy and reject the project.  Still, environmental groups were jubilant at the news of his decision.

“We’re thrilled,” said Brett VandenHeuvel, executive director of Columbia Riverkeeper. “This decision could have gone either way, but (EFSEC’s) recommendation to deny was so emphatic and thoroughly researched and broad-based that the governor made the right decision.”

Eric de Place, program director of the Sightline Institute, an environmental think tank in Seattle, said that when the terminal was first proposed in 2013, he thought it could be approved; even a couple of years later, oddsmakers in the oil and gas industry thought it was still viable.

From his perspective, Inslee’s rejection of the Vancouver Energy project speaks volumes about the fate of fossil fuel infrastructure projects proposed in the Pacific Northwest.

“To me, this is not about this oil train terminal, it’s about all the terminals proposed in Washington,” he said. “All the projects that proposed new terminals were all rejected. This is a sign … that the Northwest is extremely hostile to the fossil fuel industry. They can’t (build) here no matter how much money they have.”

Troy Brynelson contributed to this report.