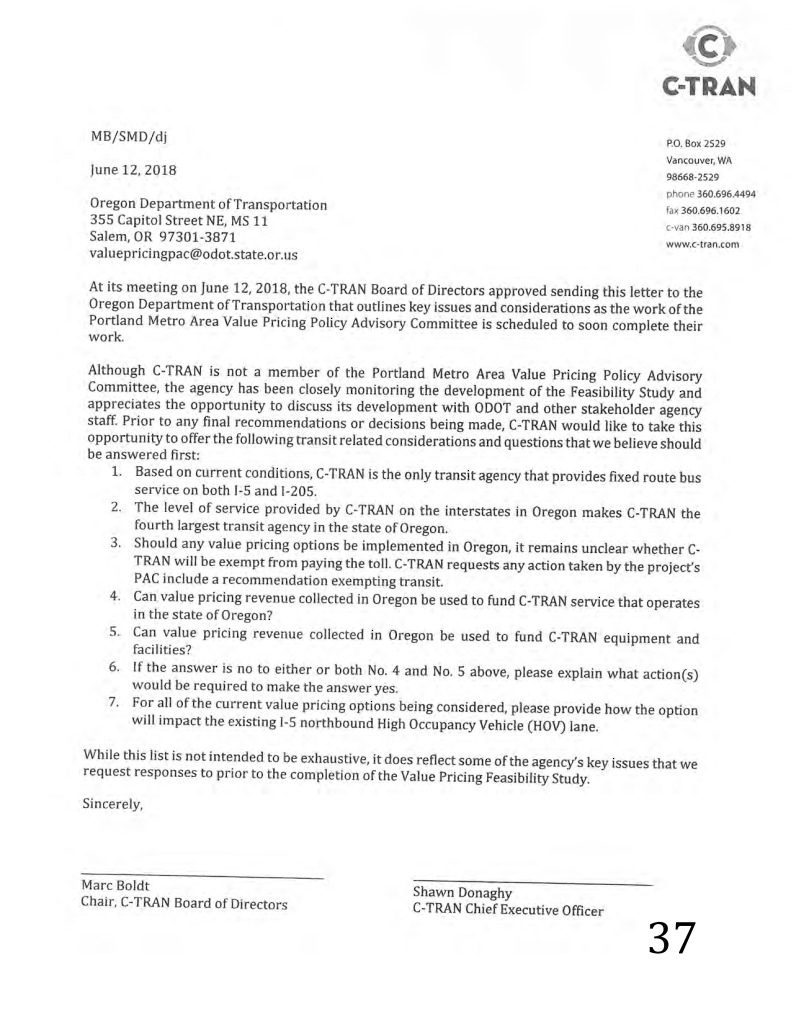 As Oregon studies using tolls — aka congestion pricing — on Interstates 5 and 205 to manage traffic into Portland, C-Tran is asking officials to consider giving public transit a break, or maybe even cut it in on the revenue.

C-Tran’s Board of Directors approved a letter Tuesday night that will be sent to the Oregon Department of Transportation. It raises seven points that C-Tran believes should be considered before the Portland Metro Area Value Pricing Policy Advisory Committee finishes its feasibility study on tolling the freeways around Portland.

Among them, C-Tran wants to know if it would be exempted from paying any toll that’s implemented.

If Oregon does establish tolls, C-Tran requests that the committee exempt transit. C-Tran also wants to know if the tolling revenue that Oregon collects can fund C-Tran services that operate in the state or if it can help pay for its equipment and facilities in Vancouver.

If not, C-Tran wants to know what it would take to make that possible.

The agency also wants to know how the existing High Occupancy Vehicle lane on northbound I-5 will be affected in all the value pricing options Oregon is considering.

The letter explains that the list of seven points is not meant to be exhaustive, but reflects “some of the agency’s key issues” C-Tran wants addressed before the Value Pricing Feasibility Study is finished. According to the letter, C-Tran is the fourth-largest transit agency in Oregon when service into Portland is considered.

C-Tran is the only transit agency that offers bus service into Portland on both I-5 and I-205.

On June 6, the Southwest Washington Regional Transportation Council also listed their concerns in a letter to the Oregon Transportation Commission. The board wants input in future tolling discussions and argues that the revenue should support bistate projects. The Vancouver City Council sent a similar letter in May.

The Pricing Advisory Committee’s final meeting is June 25. The group will make a recommendation on tolling to the Oregon Transportation Commission as required by the Oregon Legislature.

Dream of high speed rail in the Northwest may finally be on the horizon
Latest NewsNovember 22, 2021
Amtrak service along Point Defiance bypass to resume 4 years after deadly derailment
Latest NewsNovember 10, 2021
Projects would invest billions on Lake Roosevelt for needed renewable-energy storage, but hurdles are high
Latest NewsOctober 31, 2021