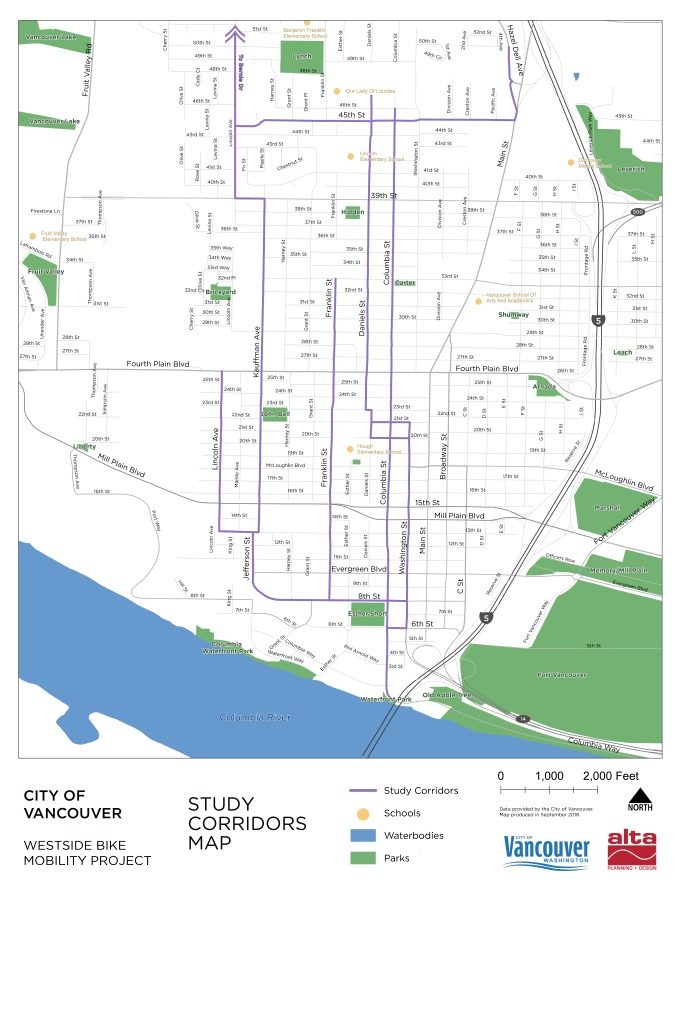 Like many suburbs, modern Vancouver was laid out with the personal automobile in mind. But now Vancouver is looking at ways to make the west side more accessible to people who want to ride a bike more often but are intimidated by the street system.

“We have a few facilities, but not for all ages and abilities,” said Anna Dearman, senior transportation planner for the city of Vancouver.

The city wants to design north-south biking routes to better connect downtown Vancouver with other neighborhoods west of Interstate 5.

City planners have been working on the Westside Bike Mobility Project since June. Now they have a list of routes that could be strong candidates for better bike infrastructure in the future, and they’ve extended the public comment period in an effort to get more feedback from the community.

The project is part of the city’s Westside Mobility Strategy — a larger city initiative aimed at addressing the west side’s multidimensional transportation needs while balancing livability and economic needs. It’s also part of the city’s effort to embrace its Complete Streets Program, which strives to create roads that are accessible to all users through flexible solutions and designing streets that maintain a community’s character.

Planners argue that a majority of adults, as many as 81 percent, would cycle more often if the routes were better.

“Anything to make riding safer. We’re all for it,” said Holly Williams, treasurer of Bike Clark County, adding that the west side’s bike infrastructure is patchy.

“For me, what’s really exciting is getting people on the Burnt Bridge Creek Trail. Right now it’s not good,” she said.

Also, “There are problems on Columbia (Street) where it gets down to Mill Plain (Boulevard) and 15th (Street). The bike lane just vanishes.”

The city has conducted some outreach about the project, but plans to do more.

What that includes remains to be determined, Dearman said. But, for now, at least, an online open house where people can leave comments will be continued.

In it the city asked what would help people ride more often. Anonymous commenters called for such things as better connections between bike lanes, lanes protected from traffic, and safer intersections where cars and bikes interact, among others.

Improving bike infrastructure, so cyclists aren’t in or too near vehicle traffic, has proven to make streets less stressful and safer for all users. According to city documents, New York City roads with protected bike lanes saw 40 percent fewer injury crashes for all road users between 2006 and 2010.

Vancouver says it wants to build bike routes to make cycling safe from everyone of all abilities, but upon which streets those routes will be located remains to be determined.

The city is considering locating routes east of Fruit Valley Road and west of Main Street; incorporating Columbia, Daniels, Lincoln, and/or Washington streets; the routes might connect to the Burnt Bridge Creek Trailhead at Northwest Lakeshore Avenue and to the Columbia River Renaissance Trail at the south end of Columbia Street.

It’s also considering at least one route with bike lanes separated from general traffic lanes or a combination of protected lanes and a neighborhood greenway — typically a residential street with sharrows (a bicycle with chevrons above it painted on the street), speed cushions, and no yellow center line.

That said, the city isn’t going to go out and build new bike lanes when the project is complete. Instead the city wants to fold the bike infrastructure concepts into paving projects as soon as next year.

After the public comment period is complete, the city plans to combine the feedback with data it’s collected. It’ll then release plans and cost estimates for the final designs.

More information is available at Bit.ly/westsidebike.