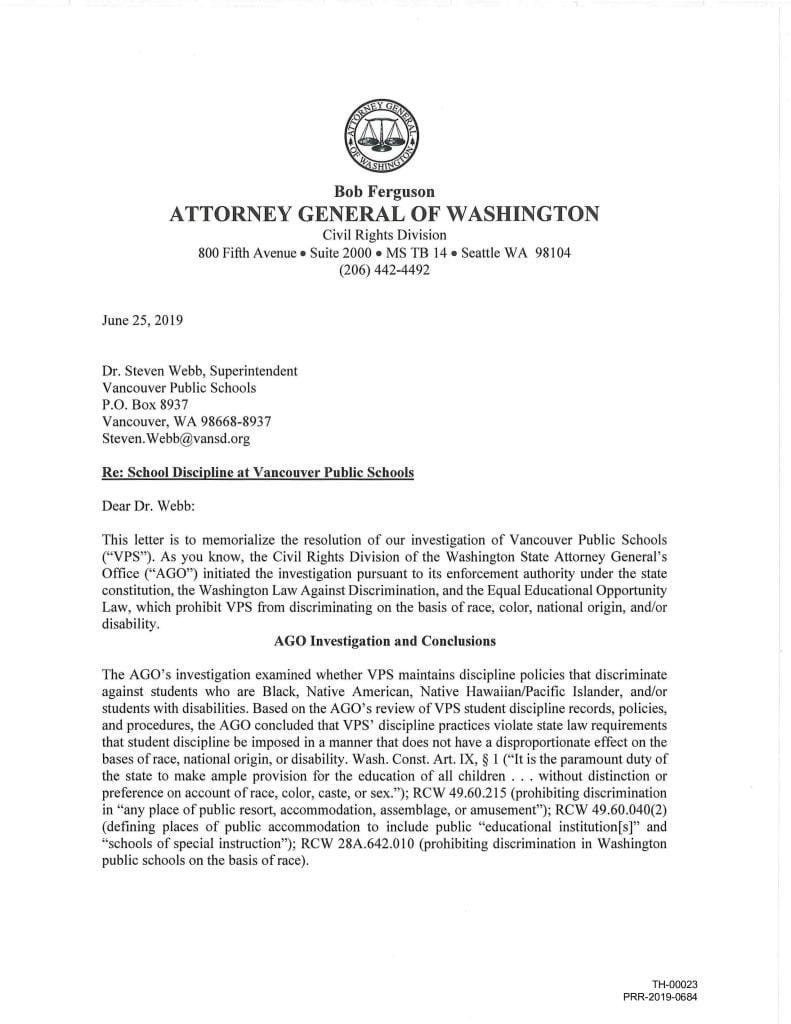 Vancouver Public Schools’ discipline practices keep a higher proportion of students of color and students with disabilities out of school than their white and nondisabled peers, according to an investigation by the state Attorney General’s Office.

A June 25 letter from the Attorney General’s Office to the school district, a copy of which was provided to The Columbian, reports that Vancouver Public Schools’ discipline practices led to disproportionately higher rates of suspension and expulsion of black, Native Hawaiian and Pacific Islander, and Native American students. Students with disabilities also faced those punishments at higher rates than their nondisabled peers.

Discipline policies that more severely impact students of color and disabled students are a violation of the Washington Constitution and several state laws.

“The AGO further concluded, after interviews with VPS district staff, that VPS’ practices have led to high student discipline rates at every stage of the process,” the letter reads.

If students of color or disabled students are being excluded from school at a higher rate than their white or nondisabled peers, school districts are required to review their discipline policies to ensure they’re not the result of discrimination. But Vancouver Public Schools failed to do so, according to the letter.

“VPS has not met its obligation to take prompt action to ensure this … is not the result of discrimination,” according to the letter.

According to the Office of Superintendent of Public Instruction, 4.9 percent of white students were suspended or expelled in the 2017-2018 school year, the most recently available data. For the student groups specified in the attorney general’s letter, those rates are much higher.

Students in those groups are suspended or expelled at the following rates:

District officials, according to the letter, told the Attorney General’s Office that the district doesn’t set or encourage policies that allow discriminatory discipline but acknowledged “that the discipline data does not reflect VPS’ desired outcomes.”

The district, however, has been largely silent on the issue, first publicly acknowledging the investigation in a press release on Wednesday following media questions about the investigation.

The district said it was apparently “randomly selected based on the Attorney General’s Office review of statewide discipline data,” and that it was committed to evaluating its disciplinary practices.

“We will address, as a system, the complicated factors involved in fairly imposing student corrective action without unintended discriminatory outcomes,” Superintendent Steve Webb said in the news release. “We are committed to refining our policies and practices to be appropriate and equitable. Our students, their families, our staff and our community deserve it.”

The district also noted that its student discipline rates overall are declining, but OSPI data shows the district has had mixed results in decreasing the rates at which students of color and students with disabilities are suspended or expelled compared with their peers.

During the 2014-2015 school year, for example, Native Hawaiian and Pacific Islander students were disciplined at a comparable rate to current data, with 11.1 percent of those students being excluded from school. Students with disabilities are also being suspended and expelled at relatively stable rates. In 2014-2015, 14.3 percent of students with disabilities were excluded from school.

Black and African American students, however, were excluded from school at a higher rate during the 2014-15 school year: 13.8 percent, compared with 5.4 percent of their white peers. American Indian and Alaskan Native students were also disciplined at higher rates — 11 percent — in the 2014-2015 school year.

School board president Mark Stoker said the board is committed to building “safe and supportive schools.”

“We’re working hard as a system to scale alternatives to exclusionary discipline while balancing our responsibilities to keep students, staff and visitors safe,” Stoker said. “It is also our goal and duty to ensure that all students have access to a public education free from significant disruption.”

The school board has not discussed the investigation in open public meetings. District spokeswoman Pat Nuzzo said the board and general counsel discussed the matter in executive session, invoking potential litigation as reason to close the conversation to the public.

Kent McIntosh is a professor in the special education program at the University of Oregon whose research focuses on the unequal application of school disciplinary policies. McIntosh said the numbers at VPS are concerning, but he said they reflect patterns across the state and country that show students of color and students with disabilities are more likely to be excluded from school.

McIntosh said one of the leading causes of disproportionate discipline rates in schools is implicit bias by school staff, or the idea that all people have unconscious beliefs about groups of people based on their race, gender or other characteristics.

“It’s not that teachers have more implicit bias than anyone else, or that all educators are racist,” McIntosh said. “Far from it. The evidence we see is that everyone has these biases.”

Educators particularly call on those biases when they’re having to make a nuanced call about a student being defiant, disruptive or disrespectful. For example, a teacher may send a black student to the principal’s office for refusing to do an assignment or speaking out of turn more quickly than they would a white student.

And disciplinary actions don’t exist in a vacuum. McIntosh said excluding students from campus can “send a message to some kids that school is not for them and that they’re not wanted at school.” Furthermore, research suggests that repeated suspensions can reduce student achievement, contribute to higher dropout rates and make students more likely to end up incarcerated, a phenomenon known as the “school-to-prison pipeline.”

“There’s a good argument that any time we suspend a student, we really put them at increased risk of … persistent poverty,” McIntosh said.

Rick Wilson, executive director of the Vancouver Education Association, said the teachers’ union is concerned about the attorney general’s findings. The union is expanding its teacher training on institutional racism and implicit bias.

“It’s the right thing to do, and we want to do it,” Wilson said. “We want to make sure our members reach all students.”

The attorney general’s letter spells out the ongoing steps the district must take in the coming years to ensure “students of all races and students with disabilities are treated in a nondiscriminatory manner.”

Most notably was the requirement that the district, at its own expense, hire an outside adviser to review two years of VPS disciplinary data and records. The adviser, Daniel Losen, director of the Center for Civil Rights Remedies at the University of California at Los Angeles, will investigate whether teacher or administrator biases are contributing to high discipline rates. Losen will also review reports made to law enforcement to determine whether students of color and students with disabilites are reported to law enforcement more frequently.

Losen researches how law and policies affect children of color and English-language learners, according to the Civil Rights Project’s website.

The Vancouver Public Schools Board of Directors did not review the contract with Losen in a public meeting. District policy is to take contracts above $50,000 to the board for approval; the initial year of the contract falls below that threshold, Nuzzo said.