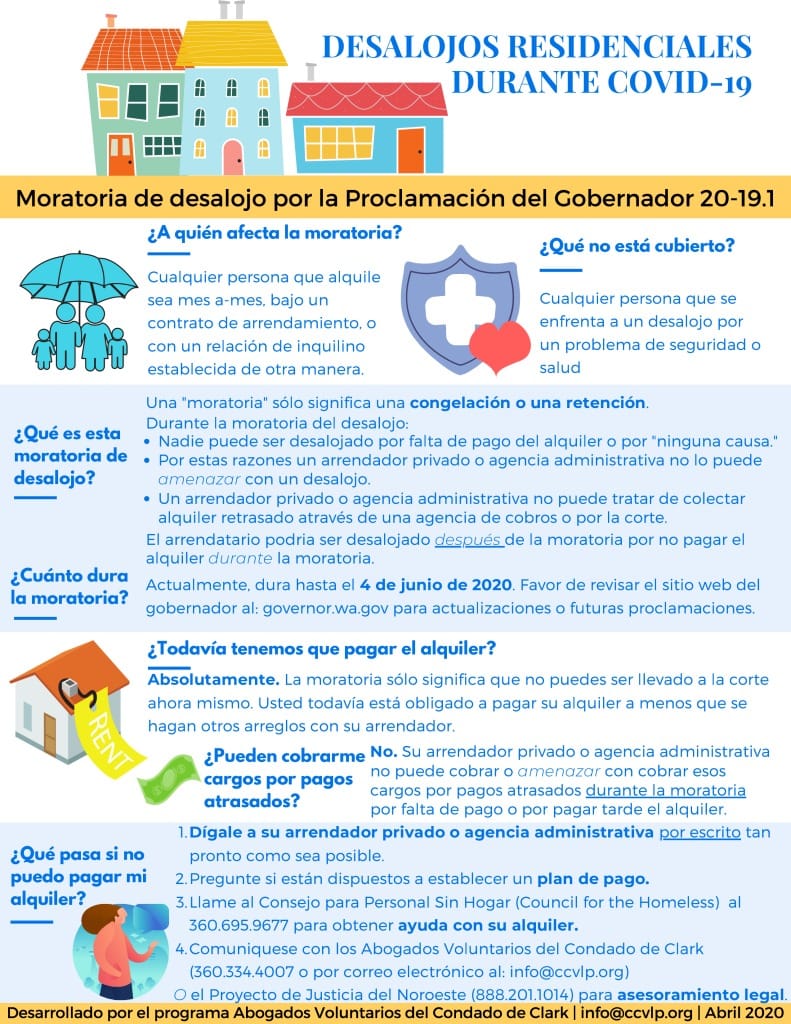 With Washington’s eviction moratorium extended until June 4, tenants who are struggling to pay rent have more time to make plans and seek rent assistance.

Elizabeth Fitzgearld with the Clark County Volunteer Lawyers Program expects to see an incredible influx of eviction filings after June 4. She advises tenants to tell their landlords in writing that they can’t pay rent and inquire about setting up payment plans.

Volunteer attorneys with her organization can look over payment plans and talk with tenants about other legal issues they’re facing during the moratorium. Landlords, for instance, cannot charge late fees or threaten to evict tenants. The Attorney General’s Office opened an eviction complaint form on April 1 for anyone who believes a landlord is violating the proclamation. As of April 20, more than 650 Washingtonians filed complaints.

Fitzgearld would like to see the governor’s office come out with guidance on how repayment plans should be structured and set a standard for what is a reasonable payment plan. 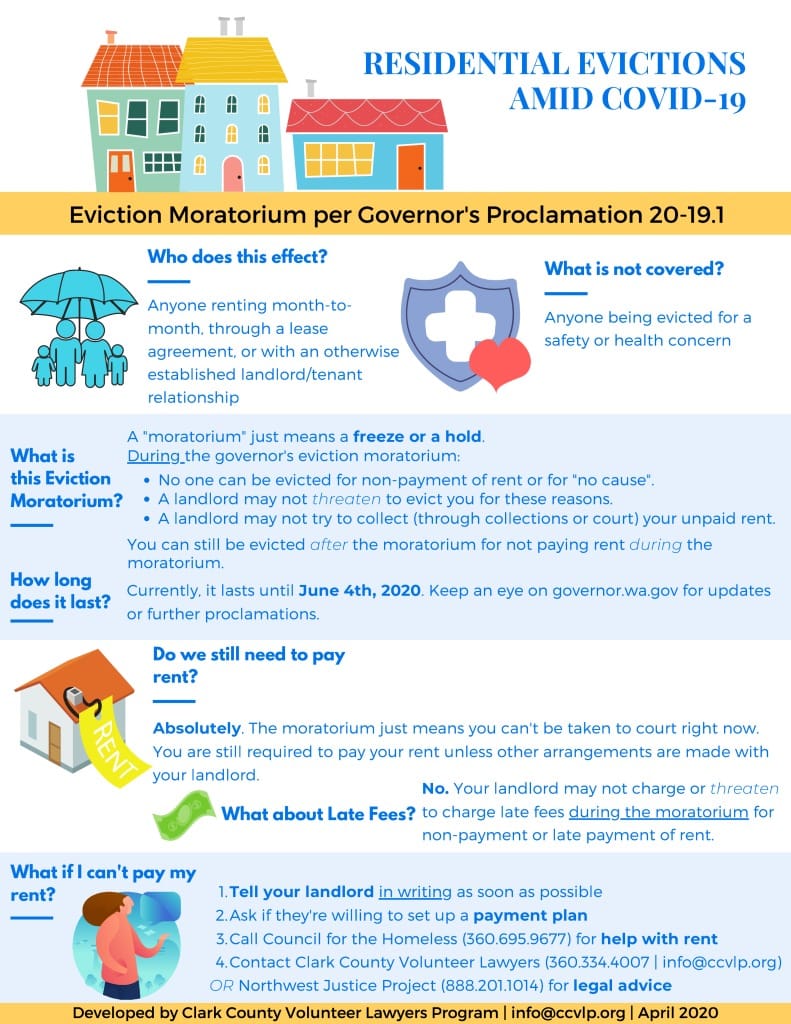 There is a nationwide #cancelrent campaign supported by the Tenants Union of Washington that looks to cancel rent payments altogether as long as people are told to stay home. Meanwhile, organizations like the Washington Multi Family Housing Association are calling on all levels of government to invest in emergency rent assistance.

On Tuesday, the Washington State Department of Commerce announced $9 million in statewide rent and energy assistance for households that qualify for the federal Low-Income Home Energy Assistance Program. Households at or below 125 percent of the federal poverty level can receive up to $1,000 in rent assistance and $500 toward utilities. (In 2019, a family of four with an annual income of $32,188 or $2,682 per month, qualified for the program.)

The Department of Commerce expects the crisis funding to serve 5,000 households with payments made directly to landlords and utility providers.

Kate Budd, executive director of Council for the Homeless in Vancouver, said the need for rent assistance will become clearer in June when people realize they absolutely have to pay rent and don’t have the means — a scenario her staff has been describing as a “cliff.”

Already in March, Council for the Homeless saw a 43 percent increase in Clark County residents calling for rent assistance compared to February or January. The nonprofit received grants from PeaceHealth Southwest Medical Center, the city of Vancouver, Clark County and the Community Foundation for Southwest Washington.

“We don’t have nearly enough assistance to meet the need that exists in the community,” Budd said. “That’s the reality during non-COVID times.”

During March, Council for the Homeless helped 53 households. Between April 1 and 24, it served 62 households.

The $100,000 from the Community Foundation is being used on a first-come, first-served basis. That means it may depend on someone’s luck calling the Housing Hotline. The nonprofit expanded hours and staff on the hotline to answer the influx of calls. It also fields calls from people who are homeless and seeking shelter.

Budd acknowledged that for many people this is their first time seeking support, so her staff are trying to get people whatever information they need.

Besides Council for the Homeless, schools, the Salvation Army, and the Society of St. Vincent de Paul offer local assistance.

Carolyn Palmer runs the largest Society of St. Vincent de Paul conference in Clark County, which is supported by four Catholic parishes. Her organization off Stapleton Road has seen a handful of new inquiries about rent assistance.

“It’s been a hardship for a lot of my clients, but somehow they are surviving and so are we,” Palmer said.

Her organization initially saw the number of calls it receives for rent assistance drop once the moratorium went into effect; she’s worried people think they don’t have to pay rent at all.

As calls are beginning to trickle in from people who can’t cover May rent, the Society of St. Vincent de Paul has $50,000 from the Community Foundation to support needy households. Palmer said the money will be used to help 40 to 50 families with a month’s rent. The nonprofit also received another $25,000 to address its “greatest need,” which will be spread across all of its services.

“That took a whole lift off of my shoulders and made me cry. … I was overjoyed,” Palmer said. “This is really going to help us stabilize some families.”

Janus Youth got $45,000 from the Community Foundation to help low-income young adults, many of whom lost jobs in retail stores or restaurants. The Community Foundation also directed money to organizations supporting Latinx households, who may be mixed-status families unable to receive federal benefits to stay afloat.

“The pandemic hasn’t created a housing crisis. It is merely exposing the problems that already existed,” Jennifer Rhoads, president of the Community Foundation, said in a news release. “Our goal is to offer urgent assistance to our neighbors who stand to lose the most during this crisis.”