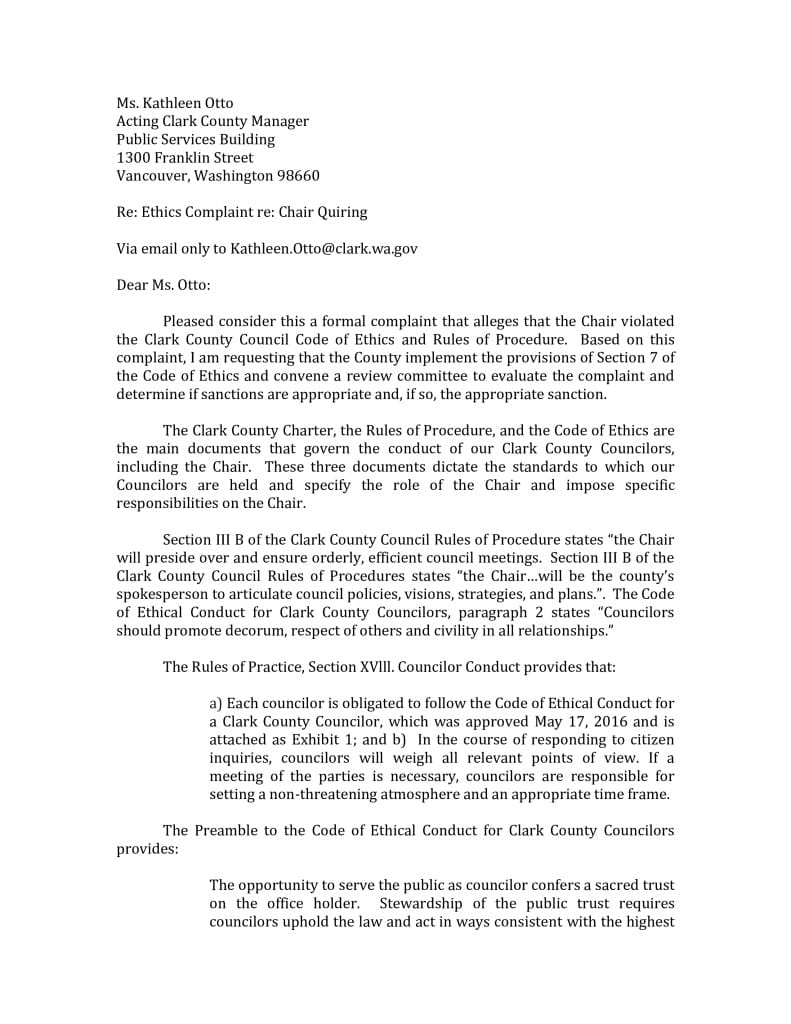 An ethics complaint has been filed against Clark County Council Chair Eileen Quiring over her participation in recent council discussions on systemic racism.

The complaint, filed Thursday, alleges that Quiring violated the council’s code of ethical conduct and rules of procedure in several of her comments and actions in the past few weeks. Quiring has received calls to step down after she said on June 24 that she does “not agree that we have systemic racism in our county. Period.”

Bridget McLeman, a candidate for the Clark County Charter Review Commission who has criticized the county on several fronts in the past, filed the complaint.

McLeman sent the complaint in a letter to Interim County Manager Kathleen Otto. It asks the county to convene a committee to review the complaint and determine which sanctions, if any, are appropriate.

“The council has been notified of the complaint and will be discussing the process next week,” Otto wrote in an email.

The complaint alleges that Quiring’s words and actions in the past few weeks have violated one of the principles in the code that requires councillors to “perform the duties of public office with fairness and impartiality so to enhance public confidence in county government.”

Quiring challenged the basis of the complaint in a text message Friday.

“I am disheartened about this complaint as it is using an ‘official’ complaint to silence me for expressing a different point of view — for which, by the way, I am receiving support from many in the community who are frankly afraid to speak up for fear of reprisal or harm to their families and businesses,” Quiring wrote.

The complaint says Quiring violated a mandate in the council’s rules of procedures that the chair preside over meetings in an orderly, efficient fashion; serve as the spokesperson to articulate council policies; and promote decorum, respect and civility.

“Chair Quiring has failed to meet the requirements of the chair position set out in the charter and the rules of practice, and she has failed to promote the vitality of the democratic process in county government,” the complaint reads.

The complaint refers to a resolution that the council passed unanimously on June 16 “relating to eliminating systemic racism and injustice in Clark County.” It alleges that, by denying systemic racism in the county in her comment about a week later, Quiring “ignored, and spoke in contravention to” the council’s principles stated in the resolution.

McLeman also said that Quiring’s interaction with Councilor Temple Lentz, with whom she has had several debates on the subject, on June 24 failed to maintain proper decorum.

“By dismissing the efforts of other councilors to stimulate a (dialogue) on troubling issues, Chair Quiring appears to be nursing what she perceives as personal attacks against her when she should be striving for excellence and continuous learning relative to personal development and all operations of county government,” the complaint reads.

NAACP Vancouver and the League of United Latin American Citizens called for Quiring’s resignation on June 27. A resignation petition that began circulating online June 27 had more than 6,000 signatures as of Friday afternoon.

Quiring has said that she will not step down and accused the organizations of “having such a knee-jerk reaction to a different point of view.”

The complaint says Quiring denigrated the local cultural organizations and ignored specific instances of systemic racism, including interaction between law enforcement and the public as well as employee discrimination cases against the county.

“These statements appear to be based on her personal opinion, not adopted public policies of the council,” the complaint reads.

The council code of ethics requires that any councilor charged with violating the code be subject to review by a committee of two fellow councilors — chosen by the majority of the council — and one citizen, who would chair the committee and be chosen by the two councilors.

Tags
Clark County GovernmentEileen Quiring
Receive latest stories and local news in your email:
By signing up you are agreeing to our Privacy Policy and Terms of Service.