A statewide moratorium on evictions meant to prevent a wave of homelessness during the COVID-19 pandemic was recently extended to Oct. 15.

The moratorium, first proclaimed in mid-March, was set to expire Aug. 1. Late last week, Gov. Jay Inslee announced the extension along with new rules for social gatherings that will further delay reopening the economy, which means some tenants still may not be able to pay rent.

During the press conference, Inslee emphasized that tenants who can need to pay rent. The moratorium “is for the folks who are really in tough times,” he said.

According to the U.S. Census Bureau’s latest Household Pulse Survey, 15 percent of adults missed last month’s rent or mortgage payment, or have little to no confidence that they can pay on time next month.

To help address this, Washington was awarded $100 million in CARES Act funding at the end of June that will soon be put toward rental assistance.

What: Webinar discussion of the eviction moratorium’s expiration.

Where: Visit councilforthehomeless.org/community-education to register.

Are you a renter with legal questions about the eviction moratorium?

Are you a renter needing help paying rent?

Penny Thomas, spokeswoman for the state Department of Commerce, said the agency has been working feverishly to get a rental assistance program designed and implemented.

It’s intended to prevent evictions among people most likely to become homeless or experience severe health consequences as a result of eviction. Additionally, it aims to promote equity, particularly among those disproportionately impacted by the COVID-19 pandemic. That includes people who are Latinx or Hispanic, Black, American Indian or Alaska Native, Native Hawaiian or Pacific Islander as well as young adults, seniors and those living with underlying health conditions.

Money should reach communities early next week for distribution to housing providers.

The Clark County Volunteer Lawyers Program originally planned a Thursday webinar on evictions, but with the moratorium being extended the group is redesigning the event.

Jessi Anderson, the organization’s legal director, said the governor recognized people may be desiring an explanation for what constitutes a reasonable rent repayment plan. There’s also an emphasis on respectful communication between landlord and tenant. The Clark County Volunteer Lawyers Program has not received many calls about landlords harassing tenants.

Anderson advised renters to not ignore their landlord’s requests to discuss payment plans, which have to be specific to each tenant and their personal financial situation. 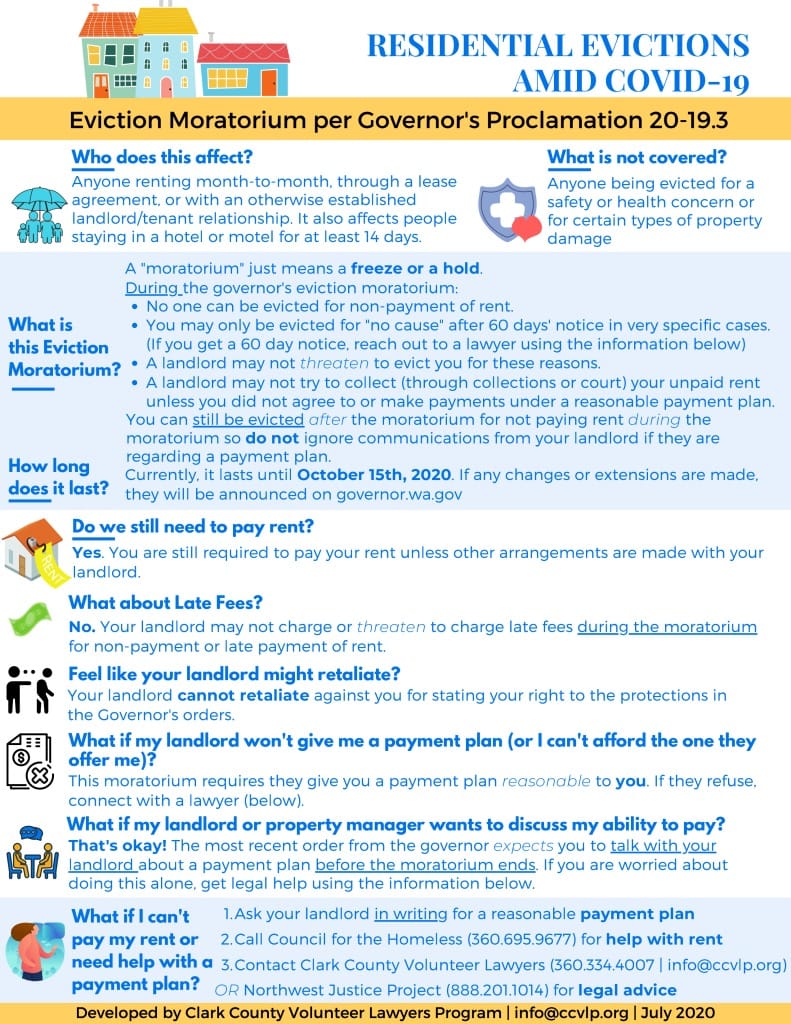 “I would just like tenants to not be procrastinating on this,” Anderson said.

Executive Director Elizabeth Fitzgearld noted the situation has the community looking at evictions differently. The response used to be reactive, a problem tackled in court. Now, there is work being done proactively to come up with repayment plans and prevent future legal action.

Anderson agreed, saying, “I think the mechanisms are here now to get this dealt with before it gets that far.”

Philippe Knab, managing attorney with the Vancouver office, is glad to see the state attorney general’s office is prosecuting illegal evictions including a local situation where a landlord claimed a tenant was a threat.

“I’m glad the system is working. When there are abuses, they are being held accountable,” Knab said. 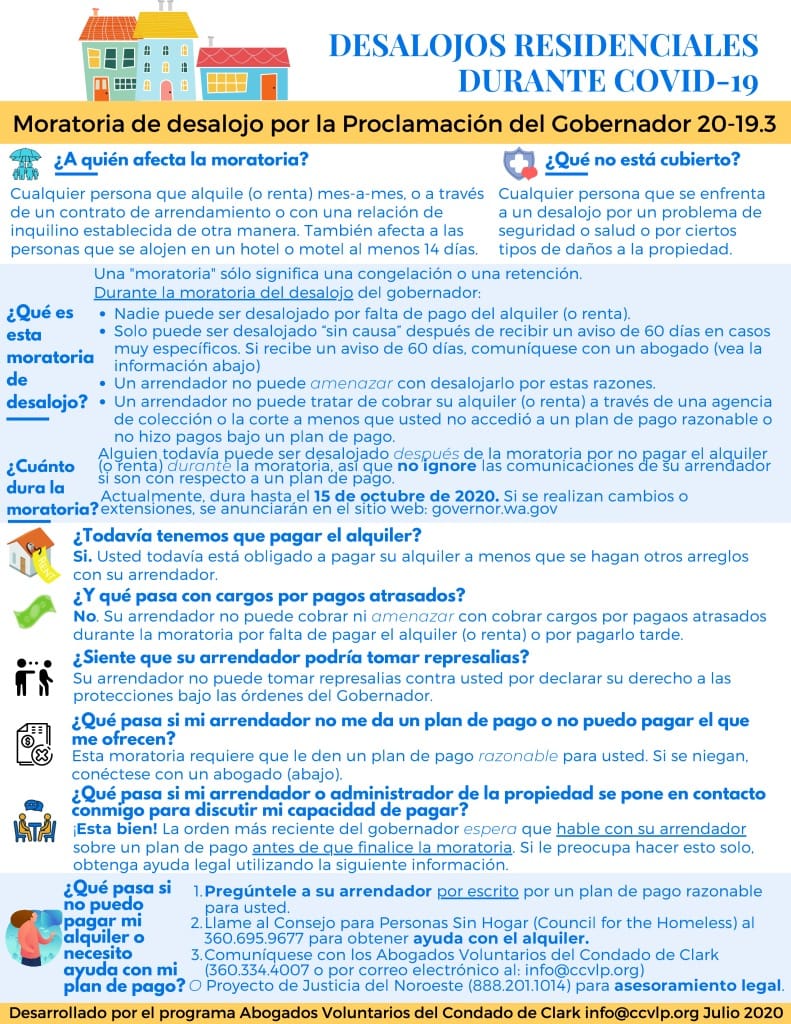 His advice to renters: “Don’t be afraid. You have protections in place and there’s a system in place.”

Tenants should not have to be looking at new apartments or doubling up with others if they don’t have to, he said.

“First and foremost, they’re entitled to shelter in place,” Knab said. “If their landlord told them they have to leave, they don’t have to leave.”

Quinn Posner, owner and attorney with NW Landlord Solutions, said extreme problems with the moratorium are few and far between, but there are occasional problematic tenants.

One situation he’s trying to address is a tenant who’s had more people move into the unit. People are now coming and going all hours of the night, which is distressing the neighbors. 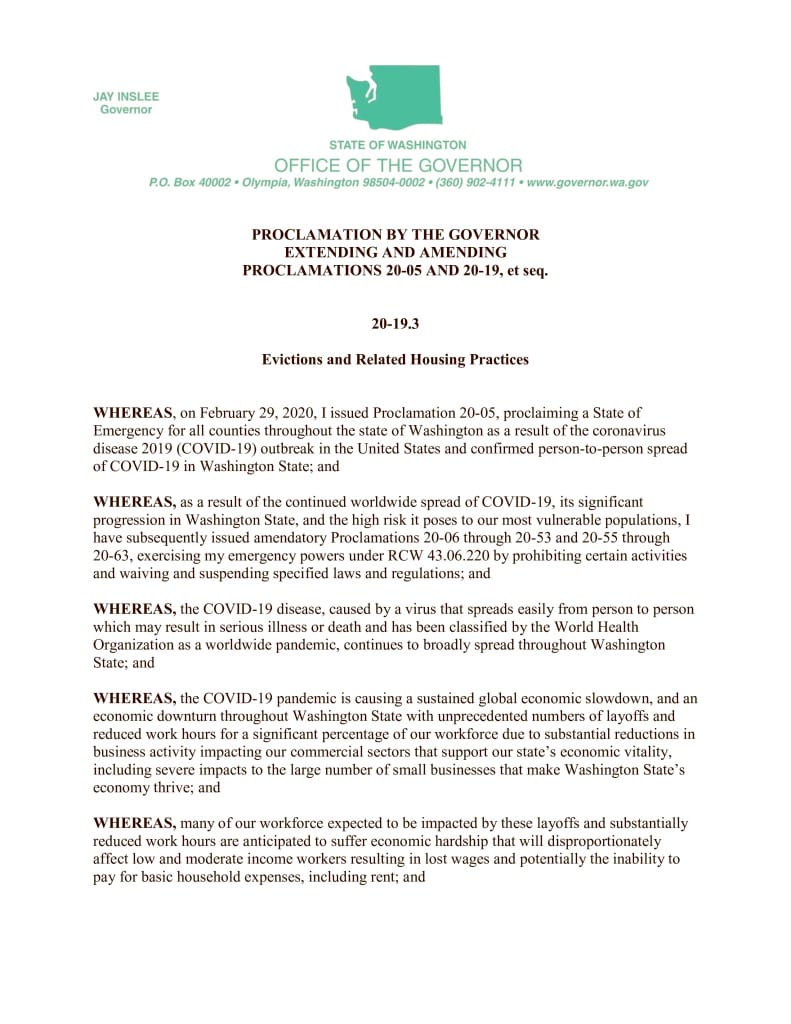 Posner is unsure if these unauthorized occupants would be considered tenants rather than trespassers under the governor’s proclamation.

Landlords have to be careful with any actions they take because violating the proclamation is considered a criminal act.

While Inslee kept most of the rules the same, Posner said the new proclamation changes some language. Where it used to say evictions were barred except for instances of imminent risk to health or safety, it now says significant and immediate risk.

“I think that loosens it up a little bit,” he said.

Carollee Braithwait has been a landlord for 38 years, including 15 years in Vancouver. She’s sold rental properties over the years because she said it’s getting harder to run a mom-and-pop rental business. She still owns an 11-unit building where one tenant has not paid rent since March. She also has tenants moving out, including a longtime tenant returning to their home state to live with family, and new tenants moving in.

“My situation is better than a lot of landlords,” she said. “Even for me this is getting to be a strain.”

The income that one unit was producing is gone, similar to someone’s hours being reduced at work, Braithwait said. For other landlords who own a single duplex or triplex, they may be experiencing a much larger cut in income if a tenant isn’t paying rent.

While larger landlords can afford to weather the pandemic, smaller landlords may be in a different financial situation. It’s not tenable long term, Braithwait said, adding there may come a point where landlords cannot pay their mortgages.

At some point, she plans to sell her 11-unit building, she said, but not until after the pandemic is over.

By Sept. 15, the state plans to assemble an informal workgroup with stakeholders and legislators with experience in housing issues, though it’s unclear if there will be representation from Southwest Washington.