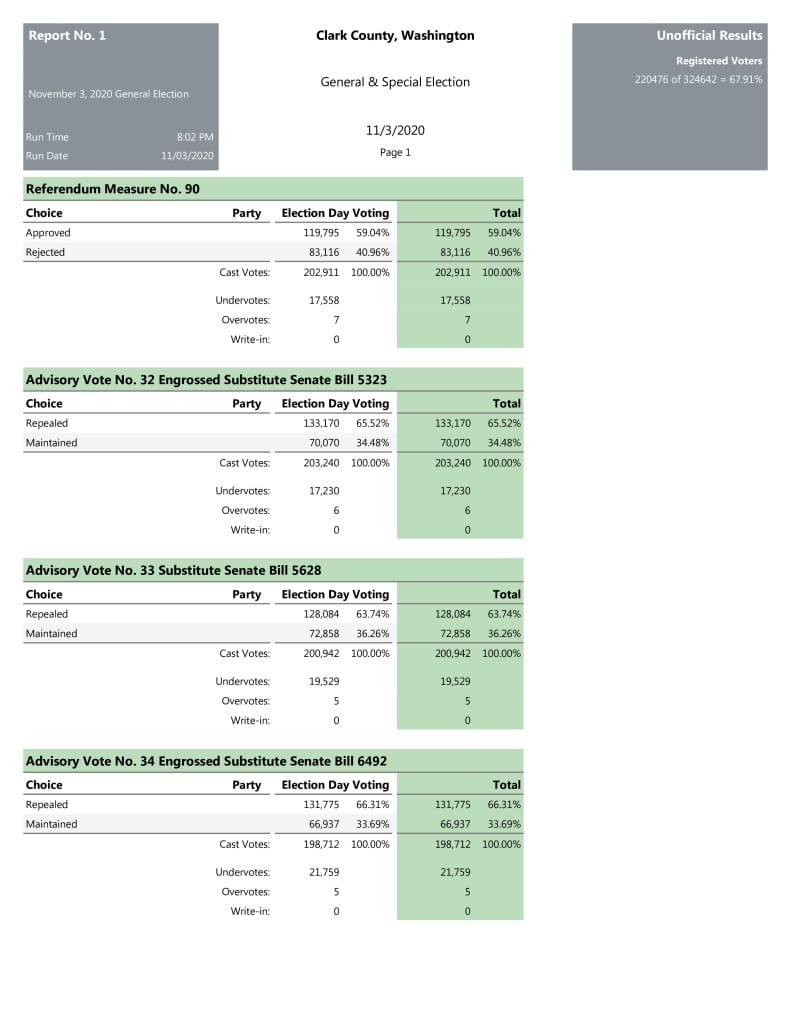 Eyebrow-raising turnout figures this election cycle began before the Aug. 4 primary, and they never slacked.

Hours before voting ended at 8 p.m. Tuesday, the Clark County Elections Office reported 259,562 total returned ballots, putting turnout for Tuesday’s general election at 80.13 percent so far. Those numbers will grow in the coming days as ballots postmarked by Tuesday trickle into the elections office.

Clark County Auditor Greg Kimsey had predicted a historic 90-percent turnout in this election, a belief that began months ago as his office received primary election ballots. Out of 304,550 Clark County residents registered to vote in the primary election, 50.76 percent submitted ballots.

“The level of interest and attention once we mailed out ballots was very high,” Kimsey said of the primaries.

In a couple of ways, polarization is the likely key to higher turnout this year both locally and nationally, said Mark Stephan, an associate professor of political science at Washington State University Vancouver.

Voters who belong to political parties have hardened their views in the past 20 years, making them more likely to vote, Stephan said. Additionally, the electorate this year is driven by feelings toward President Donald Trump — a mixture of enthusiasm and anxiety.

That mixture can also lead to negative outcomes, which this year has included voter intimidation. Due in part to concerns of potential intimidation, the Vancouver Police Department announced Tuesday that officers were patrolling ballot boxes.

“People are just, sort of, energized in general,” Stephan said.

The COVID-19 pandemic is also a likely driver, though the analysis among political scientists is incomplete.

“Some people are going to participate no matter what,” Stephan said. “Others need that extra incentive.”

Since August, roughly 20,000 additional county residents had registered to vote. Despite the additional registrations, this year’s general election turnout in the county has already surpassed that of 2016 — 77.25 percent — and is near the highest turnout in this century — 85.31 percent in 2008.

The results of the election will play a role in determining whether the turnout trend continues in future years, Stephan said. That being said, this isn’t the best time to make predictions.

“I think there’s a lot of unknowns,” Stephan said. “2020 has been a strange year, and who knows what the next few years will bring?”

Tags
Clark County Elections
Receive latest stories and local news in your email:
By signing up you are agreeing to our Privacy Policy and Terms of Service.