It was as bizarre of an ending to a football game as anyone is likely to see.

For one team, celebration turned into disbelief.

For the other, dejection turned into jubilation.

Both student sections from rival high schools flooded the field. For a few minutes, chaos reigned.

The aftershocks eventually spread from Columbia River High School to the center of the football universe — Monday Night Football.

When recapping the most memorable high school football games in Clark County, Columbia River’s 29-24 win over Skyview on Sept. 13, 2013 ranks high on the list.

At the end of a back-and-forth game between the west-county rivals, River lined up for a game-deciding field goal.

But the kick never had a chance. Skyview’s rush overwhelmed River’s blockers and smothered the kick.

Skyview’s players sprinted toward their sideline, arms raised in triumph. They were met by a wave of jubilant Skyview students who were rushing the field.

But the play wasn’t over. Because the kick hadn’t passed the line of scrimmage, the ball was still live. River’s Reese Keller picked it up and ran into the end zone.

The officials signaled a touchdown. While Skyview’s players stood in bewilderment, River’s celebrated as their fans rushed the field from the opposite side.

“It’s hard to believe it happened,” said former River coach John O’Rourke, who coached the team for 22 years before retiring in 2016. “It’s not within any script, at least for the high school level.”

It was a once-in-a-lifetime play for anyone involved in football. But Ken Wiggins, then a River assistant coach, had now seen it twice.

In 2000, having recently graduated from Linfield, Wiggins was on the Wildcats sideline for an NCAA Division-III playoff game against Central College (Iowa).

The Wildcats thought they had won, 17-14, in overtime when a Central College field goal was blocked. But, as Linfield celebrated, Central College scooped up a still-live ball out of the McMinnville mud and ran for a touchdown to win 20-17.

That’s why Wiggins was the first to yell for River’s players to grab the ball.

“It ran the whole gamut of emotions,” Wiggins said, recalling the play earlier this week. “At the time, nobody was sure what had happened. But none of the officials had raised their hand to blow it dead, so they were on top of it.”

Skyview head coach Steve Kizer said the chaos of students rushing the field might have played a role in the final play.

“In basketball, when the horn goes off you can throw the ball in the air,” Kizer said. “In football, the horn doesn’t mean anything until the play is dead. Our fans, they’re halfway on the field so we couldn’t yell at our players. There was nobody between Ken and his players.”

Videos of the crazy conclusion began to spread beyond Clark County. It was eventually included in the Monday Night Football pregame segment “C’mon Man!,” where a national audience chose it over three others as the week’s most outrageous play.

The buzz eventually died down. But the rivalry lives on.

Now Skyview’s defensive coordinator, Wiggins has seen both sides of it.

“There’s one thing you can’t simulate, and that’s a rivalry,” Wiggins said. “It doesn’t matter how good each team is or that we’re in different classifications. It’s a special game. It means a lot to the kids.” 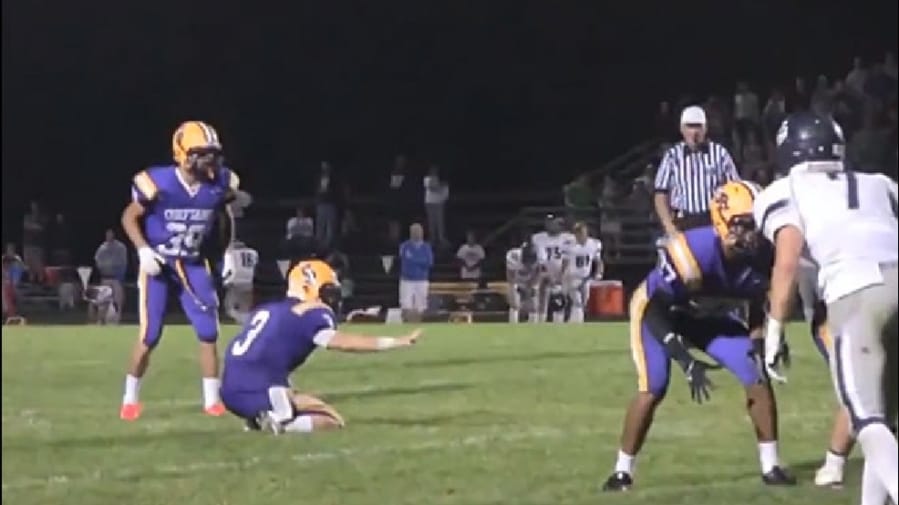 Columbia River beats rival Skyview on bizarre last-second play (with video)
Columbia River won 29-24 on a last-second touchdown, the likes of which Chieftains coach John O'Rourke had not seen in 40-plus years of coaching.

Skyview has gone on to become a consistent statewide force, reaching the postseason six of the past seven years, including the Class 4A semifinals in 2016. The Storm haven’t lost to River since the play.

But that doesn’t mean either side has forgotten.

“I still hear about it,” Kizer said. “They still have the T-shirts. My wife runs a salon on 99th Street and a lot of her customers are River parents. We’re good friends with a lot of them.”

Hence the true definition of a rivalry — Friendly competition, some good-hearted banter and, especially, an unforgettable game.