An outside prosecutor’s office tasked with reviewing the October fatal shooting of Kevin Peterson Jr. by three Clark County sheriff’s deputies found the officers’ use of deadly force was justified and lawful.

The deputies shot Peterson, a 21-year-old Black man, as he ran, armed with a handgun, from a planned drug sale of 50 Xanax pills between him and a confidential informant outside a Quality Inn motel in Hazel Dell on the evening of Oct. 29.

“It is tragic that Mr. Peterson lost his life. But he made the regrettable decision to distribute drugs and, in the course of felony drug dealing, threaten to shoot the police,” Pierce County Prosecutor Mary Robnett and Chief Criminal Deputy Prosecutor James Schacht wrote in their report.

The shooting occurred shortly before 6 p.m. in the parking lot of a shuttered U.S. Bank branch, 6829 N.E. Highway 99, adjacent to the motel.

In all, the deputies fired 34 rounds at Peterson, striking him four times. He died at the scene.

In December, Clark County Prosecutor Tony Golik asked Pierce County prosecutors to review the deputies’ actions in the case, in an effort to increase independence in the investigation.

In a statement Monday, Clark County Undersheriff John Chapman said the agency appreciates the “hard work” of the independent investigators and Pierce County prosecutors involved in the case.

“Incidents such as this are very difficult on everyone. The loss of life is tragic for all the parties involved. Although some may have expected or wished for a different outcome, we have placed our trust in the independent investigation protocols as put in place by the state of Washington,” he said.

Crucial details were in dispute during the shooting investigation.

Investigators concluded Peterson had committed conspiracy to deliver a controlled substance and attempted assault on law enforcement when he pointed a loaded Glock 23 .40-caliber pistol at pursuing deputies. However, they also concluded he did not fire the weapon, contradicting what officials initially said.

Pierce County prosecutors noted Peterson “had ample opportunity to discard the gun” before he was confronted in the bank parking lot.

“He took the gun with him when he unlawfully fled from the Mercedes, he retrieved it after dropping it despite commands to leave it where it was, and he pointed it at the containment officers who met him at the U.S. Bank,” their report reads.

“There was no legal requirement for the officers to allow Mr. Peterson to fire first before defending themselves. They did not have to wait for him to pull the trigger,” prosecutors said.

Additionally, prosecutors noted three emojis on Peterson’s Snapchat— used to communicate and arrange the drug sale — that depicted a handgun and explosion facing a police head.

“His actions coupled with his communications with the informant conveyed to the officers that he was intent on getting away and prepared to engage in armed resistance to keep from being arrested,” prosecutors wrote, adding that “these undisputed facts combine to justify a very reasonable fear” by law enforcement that Peterson would shoot them if he had no way to escape.

A law firm representing Peterson’s family contends he did not point the gun at deputies before being shot.

Attorney Mark Lindquist, of Tacoma-based Herrmann Law Group, said Monday that “we still don’t know if it was a gun or cellphone in his hand when he raised his arm.” (Peterson was on a video call with his girlfriend during the incident.)

“Our laws do not allow an officer to shoot a suspect for running away. In his own interview, Deputy Anderson admits he shot Kevin because he wasn’t obeying commands and wouldn’t stop running,” Lindquist said in an emailed statement. 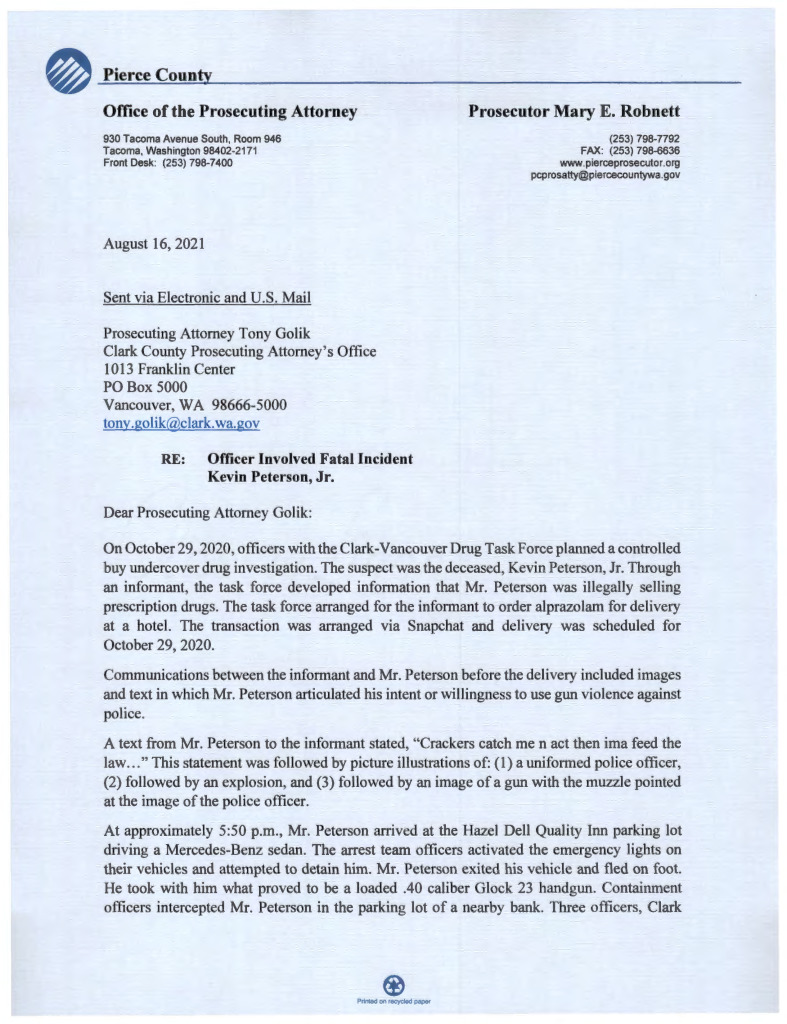 Lindquist referenced an interview in which Anderson told investigators: “At that point, I kinda just drew the line in the sand. I said, ‘I’ve given suspect enough commands. If he takes another step, I’m gonna shoot him.’ He continued to run. I started shooting.”

In March, Peterson’s family filed a tort claim for wrongful death against Clark County, alleging Peterson was shot in the back as he ran away.

“We are shocked an officer gets to shoot Kevin in the back because he’s tired of chasing him. And now the two officers who shot at Kevin while he was running are both back at work. This is unfair and unsafe for everyone in the community,” the family said in an emailed statement Monday.

The third deputy, Brown, was shot and killed during a July 23 stakeout of three suspects in a gun trafficking investigation. His alleged assailant is being held on suspicion of aggravated first-degree murder and unlawful possession of a firearm.

Lindquist said the family plans to file its lawsuit this fall.

“I’m confident justice will prevail in the family’s civil suit against the county,” he said.