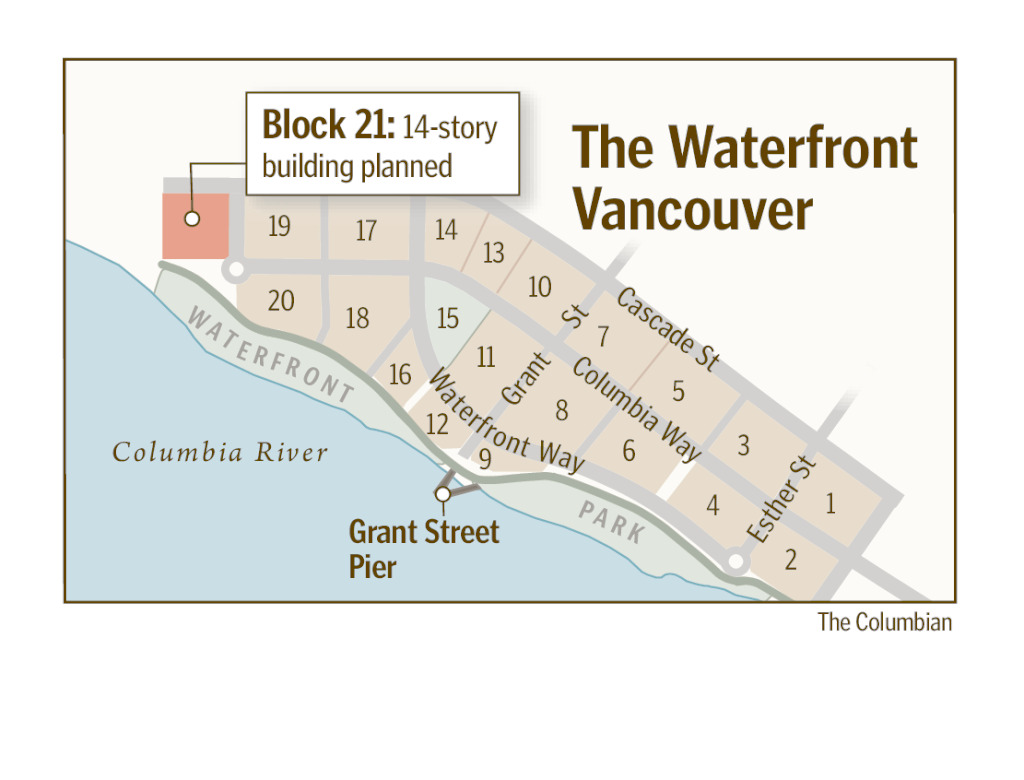 A newly announced building set to rise at the Waterfront Vancouver will be the third tallest in the city.

The Modera Vancouver building will be on Block 21, on the northwestern edge of the development, and will house 14 stories of mostly apartments. Construction is expected to start in August of next year, said Sam Rodriguez, senior managing director of Mill Creek Residential, the developer of the project.

Plans submitted to the city of Vancouver show that Modera will have 268 units of studio, one-bedroom and two-bedroom apartments. The average size of the units is 750 square feet.

The building will measure 156.75 feet tall, the tallest building at the Waterfront Vancouver development and the city’s third-tallest building behind Smith Tower and 805 Broadway building (not including grain silo towers, antennas and other non-occupied structures). The Federal Aviation Administration’s maximum height is 162 feet for that block, according to the application to the city.

“It will be the first residential high-rise type 1 construction,” Rodriguez said. “We want to capitalize on the views. We wanted some verticality.”

Portland-based Ankrom Moisan Architects was hired for the development project and provided renderings to the city. The look and details of the project are subject to change as the building works its way through the permitting process.

Modera’s plans mention a pool and hot tub on the seventh floor, as well as 265 parking stalls. The ground floor will hold 2,400 square feet of retail. The top floor will also be some of the first “true penthouses” in the city with high-end luxury and space that’s on a high level, Rodriguez said. The building will most likely be LEED-certified, he said.

Modera Vancouver will be Mill Creek’s first Vancouver building, and the company is eyeing other properties in the city, Rodriguez said. Mill Creek is a national multifamily developer in 17 markets nationwide, with more than 2,000 units.

The building will participate in the Multifamily Tax Exemption Program from the city and offer a portion of the apartments to low-income renters.

Mill Creek is in the process of purchasing the block, among the last handful of properties still for sale at the Waterfront Vancouver.

Rodriguez said he had been eyeing a development project at the waterfront, but he didn’t want to be one of the first developers there. The rate at which the retail spots have been filling up and the high occupancy rates in nearby buildings have made Mill Creek confident in the investment.

“We think Vancouver is poised for growth,” Rodriguez said. “The tax differentiation between Portland and Vancouver is going to help build up the city of Vancouver.”

Seattle starts work on bridge from market to waterfront
NorthwestJune 27, 2022
Big, boxy apartment buildings are multiplying faster than ever
BusinessJune 26, 2022
‘Everything is on fire’: Ukraine region weathers bombardment
Latest NewsJune 21, 2022