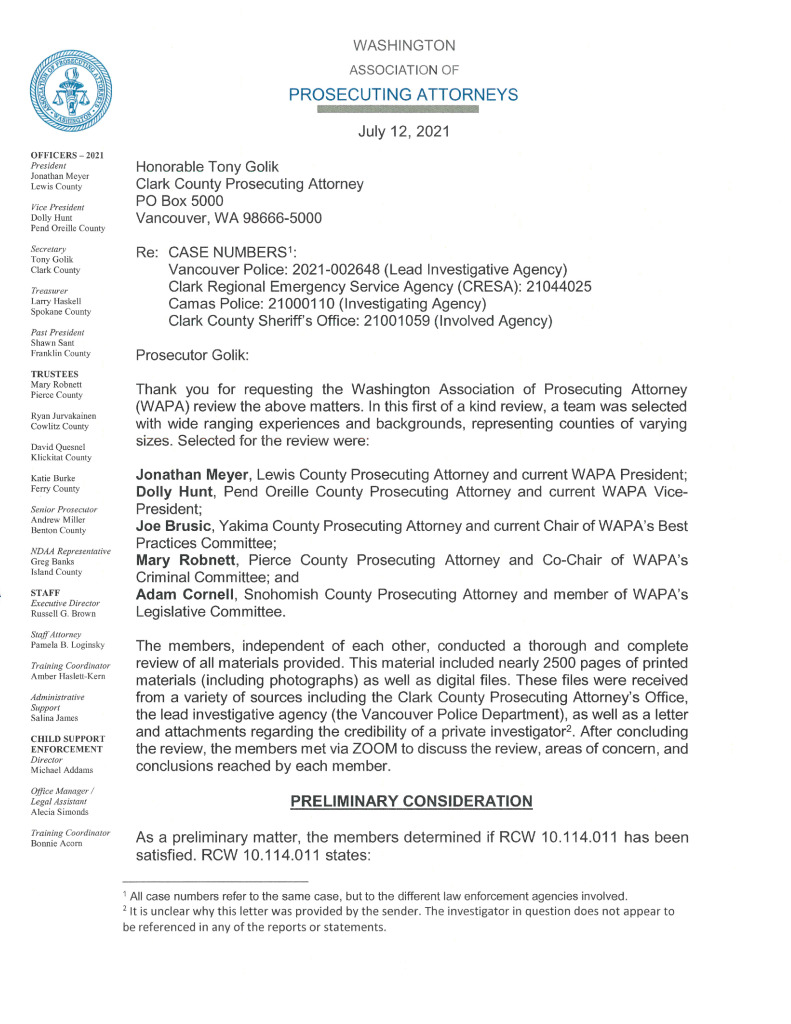 A statewide panel of prosecutors tasked with reviewing the shooting of Jenoah Donald, a Black motorist killed by a Clark County deputy, found the deputy acted in “good faith.” That is, a similarly situated law enforcement officer would have also used deadly force under the circumstances.

The first-of-its-kind review was created by the Washington Association of Prosecuting Attorneys to help assess whether Deputy Sean Boyle’s actions were legally justified. The panel included the elected prosecutors from Lewis, Yakima, Pend Oreille, Snohomish and Pierce counties.

While the panel backed the use of deadly force against Donald, it raised a question about how deputies initially interacted with Donald.

“What started as a ‘simple’ traffic stop for a defective taillight quickly escalated. The reviewing members cannot say the outcome would have been different, but it does not appear Mr. Donald was ever asked to step out of the vehicle, or had it explained to him why the request was being made,” the report reads.

Still, the panel found that the deputies lawfully commanded Donald to exit his car, citing officer safety, and when Donald refused and the stop escalated, Boyle fired to protect himself and the other deputies.

Donald’s mother, Sue Zawacky, said in a written statement Tuesday: “Our family feels let down and disappointed. We hope the officers will resign for the good of the community because they don’t have the patience or skills for the job. I don’t want any other families to lose their sons. Attorney General Bob Ferguson should look into this.”

Donald, 30, of Battle Ground, died Feb. 12, eight days after he was shot once in the head by Boyle.

Deputies responding to a neighborhood call in Hazel Dell had stopped Donald for a bad taillight. The situation escalated after Deputy Holly Troupe saw a sharp object in Donald’s car that turned out to be a screwdriver lying near the center console, according to investigative reports. Investigators said Donald, Boyle and Troupe struggled inside Donald’s car, and Boyle fired when Donald ignored commands to let him go as the car moved forward.

In an emailed statement Tuesday, Clark County Prosecutor Tony Golik described Donald’s death as “tragic” and said “our hearts go out to his family.”

“Five highly experienced prosecuting attorneys from around the state performed a detailed, thorough and completely independent review of this case. The reviewing prosecutors found that the investigation of this case complied with the legal requirements of independence and that Deputy Boyle acted lawfully,” Golik said.

His office also conducted a criminal review in the case, he said, and “concurs with the reasoned opinion rendered by the five independent prosecuting attorneys.”

“The actions of Deputy Boyle in this case met the legal standards of lawful conduct,” he wrote.

The panel’s 10-page report, dated Monday, includes an analysis of the shooting, facts known to Boyle at the time and summaries of the interviews with the two other involved deputies. The prosecutors said they reviewed nearly 2,500 pages of printed materials and digital files from the Clark County Prosecuting Attorney’s Office and the Vancouver Police Department, the lead investigative agency, as well as attachments on the credibility of a private investigator.

The prosecutors said it appears Donald had immediate access to potential weapons, including tools such as pliers, but that those items were not communicated to Boyle by Troupe.

“By starting the vehicle, putting it in gear, and maintaining a grip on Deputy Boyle, the vehicle, as used by Mr. Donald in this matter, could constitute a ‘weapon,’” the report reads, adding that Donald’s actions “appear to constitute the crime of assault in the third degree.”

In a statement issued Tuesday afternoon, Clark County Sheriff Chuck Atkins said, “Incidents such as this are very difficult on everyone. My thoughts continue to be with the family impacted by the loss of a loved one in this tragic event.”

He continued that he supports ongoing efforts to improve law enforcement transparency and accountability, and lauded the creation of the statewide prosecutors panel.

“We will strive to learn all that we can from this incident and work at constant improvement. I appreciate the hard work of the investigators, WAPA and Mr. Golik’s office in this matter,” he wrote. “I furthermore appreciate the hard work of each of the men and women deputies of the Clark County Sheriff’s Office, who continue to do their work of striving for the best of public safety under increasingly difficult and dangerous circumstances.”

Tacoma-based Herrmann Law Group, which is representing Donald’s family, intends to seek $17 million from the county in a wrongful death claim. The tort claim announced in June contends that Donald “was the target of an illegal ‘pretextual stop’ ” by Boyle.

The law firm cited a 1999 Washington Supreme Court case that found it’s unconstitutional for police to use a traffic stop as an excuse to investigate suspected criminal activity.

“In Donald’s case, Boyle suspected he was leaving a drug house but pulled him over for a defective rear light,” the law firm said in a news release.

In a statement Tuesday, attorney Mark Lindquist pointed to the panel’s notes that the “officers failed to de-escalate the situation.”

He said Boyle threatened an unarmed man with a police K-9 and punched Donald in the nose without provocation.

“What’s clear is the officers unnecessarily escalated a petty traffic stop into a fatal shooting. Criminal charges and civil actions have entirely different standards. Accountability and justice will come from the family’s lawsuit,” Lindquist said.