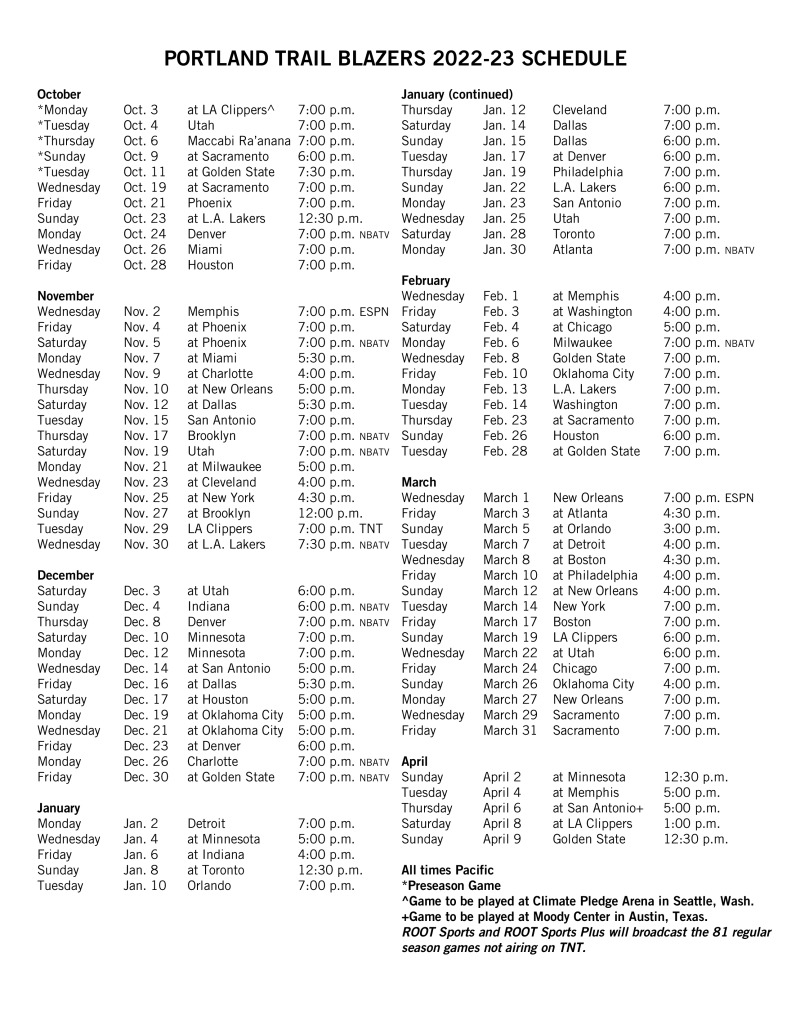 PORTLAND – The Portland Trail Blazers will begin their 2022-23 regular season on the road at Sacramento on Wednesday, Oct. 19 before returning to Moda Center for their home opener against Phoenix on Friday, Oct. 21, it was announced Wednesday by the NBA.

The Trail Blazers opening week of games will continue with a trip to Los Angeles to play the Lakers on Sunday, Oct. 23 before the team returns to Portland for a four-game homestand beginning with Denver on Monday, Oct. 24.

Portland will take on 10 of 14 Western Conference opponents twice at home and twice on the road, while playing Houston, the Clippers, Memphis and Phoenix only three times apiece. Of those matchups, the Trail Blazers will host Houston and the Clippers twice, while Memphis and Phoenix will each make just one trip to Moda Center. Portland will face each Eastern Conference opponent once at home and once on the road.

Five of the Blazers’ first seven games are at home before the team hits the road Nov. 4-12 for the first of three six-game road trips throughout the season (Dec. 14-23, March 3-12).

The Blazers have 21 road games before the calendar turns to 2023.

There are 11 home games in January including a season-long six-game homestand from Jan. 19-30 that includes a matchup with Philadelphia (Jan. 19) and the first of the Lakers’ two visits to Portland this season (Jan. 23).

The Trail Blazers will close the 2022-23 campaign with nine of their final 14 games at home, including visits from New York (March 14), Boston (March 17), the Clippers (March 19) and New Orleans (March 27) leading up to Portland’s season finale against the 2022 NBA champion Golden State Warriors at Moda Center on Sunday, April 9.

All 82 Blazers games will be televised by ROOT SPORTS and ROOT SPORTS Plus, or on national carriers. Portland is scheduled to play two games on ESPN, one game on TNT and 11 games on NBATV. The team’s nationally televised appearances are highlighted by home games against Memphis on Wednesday, Nov. 2 (ESPN), the LA Clippers on Tuesday, Nov. 29 (TNT) and New Orleans on Wednesday, March 1 (ESPN).

All games will also be aired on flagship station Rip City Radio AM-620 and the Trail Blazers Radio Network.

Season ticket holder presales will begin on Monday, Aug. 22 while single game tickets will be available through public on sale on Thursday, August 25. Call 844-RIP-CITY or visit trailblazers.com/tickets for more information.