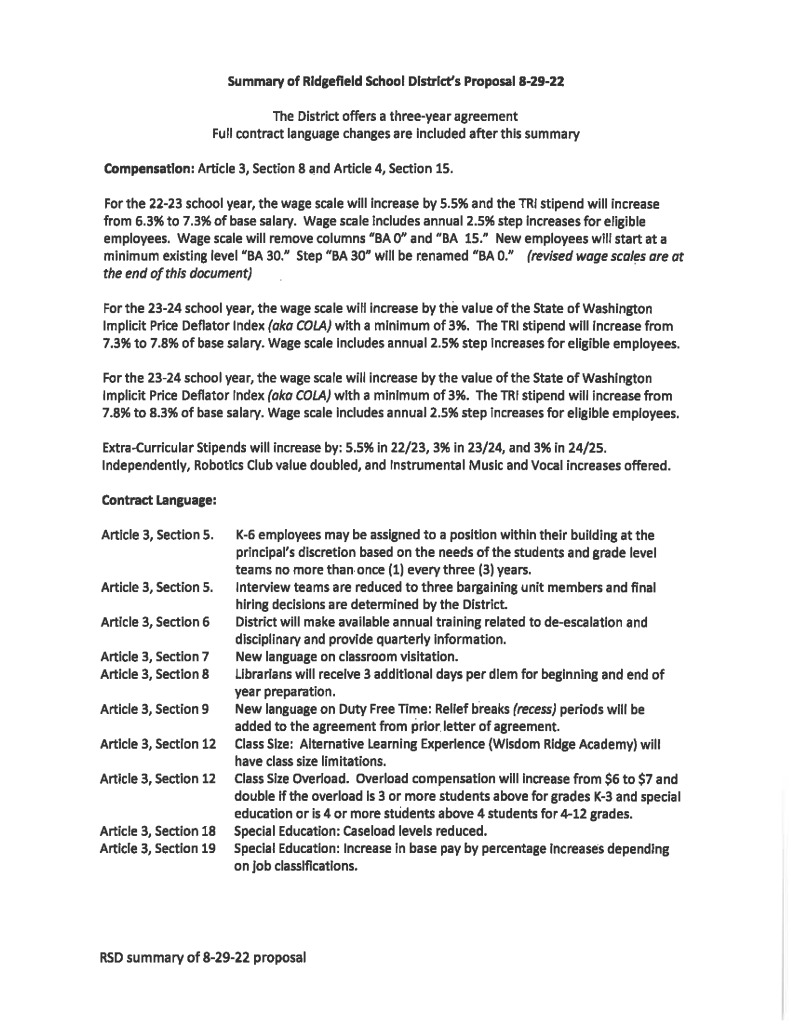 As of Monday evening, the Ridgefield Education Association and the Ridgefield School District have not yet reached a deal on a new contract. The union is likely to vote to go on strike in a membership meeting later Monday night, deeming the district’s latest offer to be far below what it sought.

The strike would be the first for Ridgefield since a three-day strike in 2018 that saw participation from teachers in public school districts throughout Clark County. The school year in Ridgefield is scheduled to begin Wednesday.

“We don’t want to strike. That’s not our intention here,” said union co-president Elizabeth Stamp on Monday evening. “They’ve put us in this position, they know it. Why they want this, I don’t know.”

Among the requests from the teachers union is for teachers to receive the full 5.5 percent cost of living adjustment allotment from the state: a salary boost intended to address rises in inflation and housing costs in Washington in recent years.

“There’s just a disconnect, and they haven’t provided any sort of justification for not extending that 5.5 percent,” Stamp said. “Classified staff got it. Administrators got it. But for some reason, they just don’t want to extend it to us. They’re just saying, ‘we can do what we want with this money.'”

Neighboring districts in Clark County that managed to receive the full 5.5 percent described the state endeavor as an effort to “play catch-up.”

“It’s an attempt by the Legislature to make up for the inflationary increases that have not been addressed previously,” said Kari Van Nostran, the president of the Vancouver Education Association, which received the full 5.5 percent in conversations with Vancouver Public Schools as well as a pre-negotiated 2 percent raise that was included in its 2021 bargaining session.

“It was a recognition for a lack thereof of the last several years and an attempt to help educators play catch-up. Our hope is that we wouldn’t need to play catch-up any more.”

Without the passage of a capital facilities bond that would have allowed the district to begin construction on new school buildings, the district has resorted to filling extracurricular spaces like Sunset Ridge Intermediary School’s wrestling room with temporary, partitioned classrooms — a move that has angered some parents and community members.

One of the biggest concerns regarding the cramped classes is regarding special education, Stamp said. Not only are the sizes of the classes beyond what’s written into the contracts of special education teachers, but in some cases they breach the terms of individual student’s Individualized Education Plans, IEP, or 504 Plans, which require the district by law to provide certain terms of service to children with disabilities.

District officials have pointed to the passage of their bond — which requires a 60 percent supermajority to pass — as the lone, true solution to the overcrowding issues. A date has not yet been set for the bond’s next vote, but it won’t be until 2023.

“Our priority is to start the school year on time,” said Ridgefield School district spokesperson Joe Vajgrt. “We want to provide fair wages, while at the same time we have to manage our fiscal responsibility.”

Ridgefield shared a full, 64-page copy of its latest contract offer on its website just after 6 p.m. on Monday, which can be found at https://www.ridgefieldsd.org/page/bargaining-update.

The Ridgefield Education Association has a membership meeting scheduled for 7:30 p.m., in which it may either vote to strike or vote to approve the new contract. Stamp said she anticipates the union to decline the district’s newest offer and that a strike vote will likely follow.

“This is very disappointing, it’s hard for even some of our members to see the disrespect we’re facing,” Stamp said. “The ball is in their court to come up with something better. We’ve tried to work with them all year long. But this shows that they don’t value us and they don’t listen.”