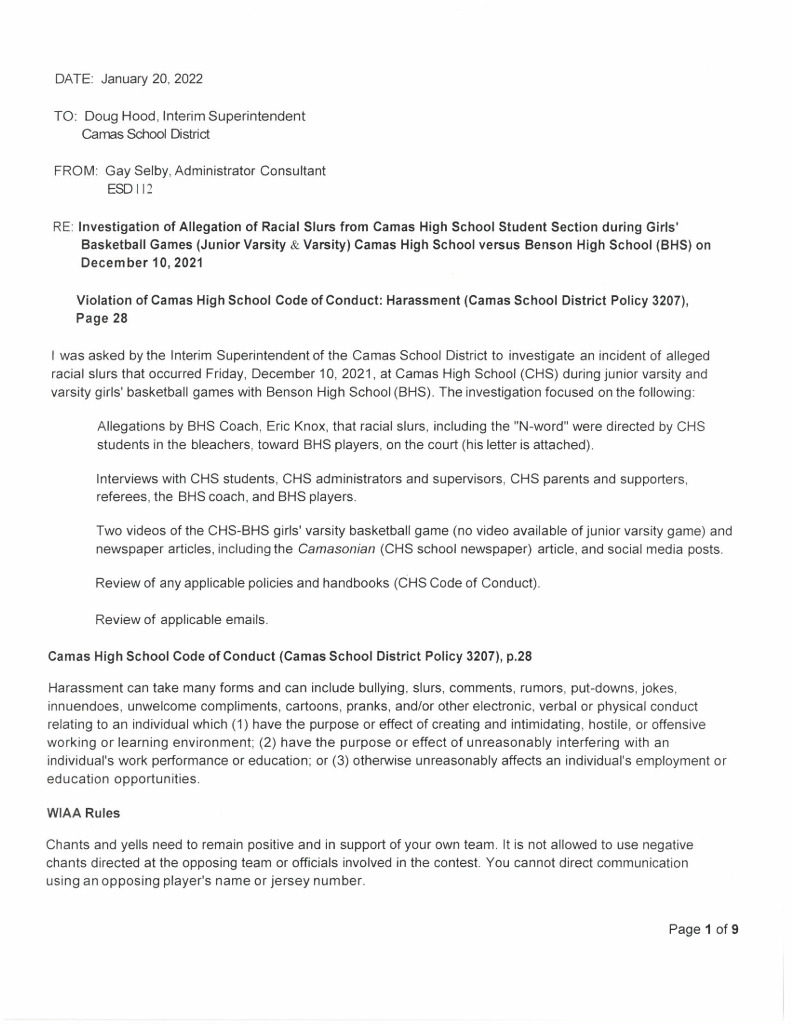 An independent investigation into alleged racist remarks made by Camas High School students at a December girls basketball game concluded inappropriate comments likely were used, but the lead investigator said “it is not possible to reach a definitive conclusion.”

The report, conducted by Educational Services District 112’s Gay Selby and released Tuesday by the Camas School District, added “there is clearly a difference of opinion” on whether inappropriate language or gestures, including racial slurs, were made Dec. 10 at the girls basketball junior varsity and varsity games between Portland’s Benson High and host Camas.

No students from the games could specifically be identified, according to the report.

The Camas School Board collectively apologized to Benson’s players and coaches and to the Camas community.

“The findings from the investigation further highlight the importance of our district’s commitment to seeing and serving EACH student, including those who visit from outside Camas,” the Board said in a statement. “While the investigation did not identify individuals responsible, the conclusion that something likely happened reinforces the need to emphasize sportsmanship, decorum, and respect for all within our schools. We reiterate that racism, bullying, and harassment of any kind or scope are not tolerated in our schools.”

Investigators conducted roughly 50 interviews among staff, players and coaches from both schools, game officials and others in attendance Dec. 10. It also reviewed game film, news articles and an official complaint filed by Benson coach Eric Knox.

In his Dec. 13 letter to the Camas School District, Knox said his team, which is predominately Black, was subjected to taunts and racist remarks from the Camas student section in both the junior varsity and varsity contests.

In response to the findings, Camas interim superintendent Doug Hood said in a statement to the Camas community Tuesday the district is developing action plans, including training and education for staff and students to develop anti-racist/anti-bias environments, partnerships with equity leaders and NAACP Portland and Vancouver chapters, and restoration efforts between Benson and Camas.

“Each and every person deserves the right to exist, learn and thrive in our community,” Hood said. “We will continue to support our students in discussing and learning from what they are seeing and experiencing. You can expect to receive updates on our continued actions.”